Ghost city of Detroit on the brink of extinction

The situation in the U.S. city of Detroit is critical. The city is dying out at an alarming rate. Currently, the financial condition of the former center of the American automotive industry is so bad that senators are seriously considering the possibility of dissolution of the city and distribution of its assets among other cities of the State of Michigan.

In mid-December of 2012, Senator Rick Jones proposed disbanding Detroit due to its disastrous financial situation, and distributing municipal property and assets among the neighboring towns and counties, Rossiyskaya Gazeta reported. "If we have no other choice, then this option should be considered. We need to think about all the available alternatives," said the legislator, adding that if the authorities focus on bankruptcy, each employee and the city itself would suffer, and Detroit would be lost forever. 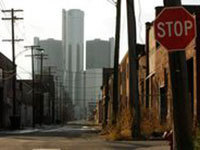 However, many officials do not rule out the possibility of solving the city's problems. Michael Belzer, professor of Economics at the Detroit Wayne Universit, has proposed a draft project The Great Lakes Global Freight Gateway (GLGFG). The idea is to create a new transport infrastructure that would connect the developed areas of the central U.S. with the Canadian port of Halifax.

This transport artery might eventually become a serious competitor to the existing trade routes between Chicago and Port of Norfolk and New York. According to experts, U.S. goods could be delivered to global markets faster and cheaper, in part because Halifax is the only port in North America capable of receiving ships of the new generation that can accommodate up to 18 thousands of containers on-board.

Currently, Detroit is virtually out of money. The city council has refused to approve a three-year $300 thousand dollars contract with a legal company that would rehabilitate the city treasury. It is precisely what Michigan insists on, promising to consider allocation of over $130 million dollars to help Detroit. The city's total debt on long-term bonds in 2012 reached $12 billion.

The city residents had a natural reaction to the lack of jobs and prospects, and in the period between 2000 and 2010, 25% of population moved into the suburbs and neighboring states. According to the last census, the city population is slightly over 700,000 people, which is 250,000 fewer than in 2000. Experts believe that this decrease in Detroit population is due to the problems of the United States auto industry and rampant crime in the once respectable city.

There is a significant shortage of funds for city maintenance. Currently 60 to 70 thousand buildings in Detroit are empty, real estate is not worth a penny, and its condition is poor. Taxes that have never been collected were meant for maintenance of schools, police, fire and other city services. Police arrives on the scene too late, and firemen at times refuse to extinguish burning buildings. All these problems have led to the fact that the remaining Detroit residents began mass migration to the suburbs, the so-called eighth mile. This process is still ongoing.

In coming years, Detroit will have to take active measures independently, because investors, both American and Canadian, are not in a hurry to line up to take part in the ambitious undertaking. Hopefully, the city will make it to this bright moment and is not simply abolished. The decision on its fate is near.