Ten world's most outstanding politicians of 2012

The outgoing year will remain in people's memory for quite a number of major world events. Elections were held, new leaders were elected in many countries. Syria was the most talked-about country in 2012, so Syrian President Bashar al-Assad can be named the politician of the year. Of course, many other significant events took place in different parts of the world. Pravda.Ru offers its own version of world's ten most outstanding politicians of the year. 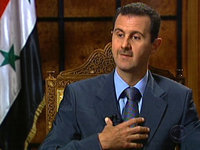 When Time magazine was choosing its Person of the Year, the editors of the respectable publication clearly underestimated Syrian President Bashar al-Assad. Despite all efforts of the U.S., EU, Turkey and Arab states of the Persian Gulf, Assad has kept his post. He has turned into nearly the biggest thorn in the eye of Western countries. It seemed that the West sentenced him to resign, but Assad stayed. Rumor has it that Assad is about to receive political shelter in Russia, but he is not going anywhere. The Syrian leader can be considered as a politician of the year just because no other country in the world has received more media coverage than Syria did in 2012. The civil war in the country continues; the number of casualties runs into tens of thousands. The U.S. and the EU, on the one hand, and Russia and China on the other, continue to share different positions as to what to do next with Assad, whether he should resign or it is too early to disregard him. In any case, the Syrian president is not going to leave the scene soon, though the position he is in is extremely difficult.

It was the U.S. president, whom Time named the Person of the Year. However, Obama has not done much in the international arena. Throughout the whole year, he was preoccupied with his own election campaign, and it was his words, rather than action that attracted attention to his persona. In the end, Obama won the presidential election, beating his rival Mitt Romney by about a million votes. He will continue to rule the country that still remains the most powerful country in the world, at least for the time being. Meanwhile, the United States has to deal with very serious problems. Right before the New Year, Obama was presented with an unpleasant gift - a possibility of the financial cliff. The public debt grows, unemployment does not reduce, social programs are stalled. Enormous defense spending and efforts to maintain dominance in the world affect the state of affairs in the United States. Obama needs to do something about it urgently.

For the Chairman of the People's Republic of China, the year 2012 became the tenth and last year that he spent as the leader of the most populous and rapidly developing country in the world. The Congress of the Communist Party of China officially announced in the autumn of 2012 that Hu Jintao would be replaced by Xi Jinping. Hu Jintao has something to be proud of indeed. China has become the second largest economy of the world. The current global crisis has not stopped, but only slowed down the country's development. As for China's politics in 2012, one should mention the conflict with Japan over the disputed Senkaku Islands, or Diaoyu, as they are called in Chinese. A real naval battle occurred, when the Japanese guards shot water cannons at Chinese fishermen. China stood up for its people. China with Hu Jintao at the head showed that he was not going to give up.

Unlike the United States, the people of France preferred to change their president. In April 2012, Nicolas Sarkozy was replaced by Socialist Party representative, Francois Hollande. He won the election thanks to the votes of immigrants from Asia and Africa, as well as those who were unhappy with cuts in social spending. So far, Hollande had to face a challenge from the radical part of French Muslims after the notorious film "The Innocence of Muslims." Hollande, like Sarkozy, had to talk about the stability of secular principles of the Republic. Hollande's promise to legalize gay marriage turned out to be quite a problem for the new French president. It turned out that such a "triumph of democracy" is not really welcome in France. In addition, in European affairs, it is Germany, rather than France, that plays the first fiddle. Hollande has a whole bouquet of problems to deal with. As for economy, France does not seem to have serious problems with it, although it is far from being perfect still.

The furious president of Venezuela, Hugo Chavez, gives something to remember almost every year. This year, it was his health that got most attention. During 2012, he visited Cuba several times to undergo the course of treatment for cancer. His opponents and some Western media outlets reported that Chavez had little time left. However, the "Furious Hugo" has not left politics in 2012. Quite on the contrary, he continues to struggle for his own life. Venezuela held presidential election in 2012, and Chavez defeated the US-backed rival by about nine percent. However, it seems that it is really hard for the Venezuelan leader to retain power. He has openly named his possible successor and even shared powers with him.

Egypt's new president has every right to be on the list of ten most outstanding politicians in 2012. The state of affairs in the land of pharaohs remained quite intense throughout the year. They could not count the votes in the presidential election, before it became clear that Islamist Morsi had not beaten his opponent, who enjoyed the support of anti-clerical and pro-Western part of the Egyptian society. After he won the vote, radical Islamists demanded sphinxes and pyramids in the country should be demolished, because, they say, they did not come along with the precepts of Islam. Morsi could play a major role in Middle Eastern affairs, but his hands were tied. When it came to a referendum on a new constitution, which referred to strengthening the role of Islam, it became clear that many disagreed with the president. The expansion of his powers angered many Egyptians. The year 2013 should give an answer to the question of whether Egypt becomes an Islamist country, or maybe Islamist Morsi is not so black as he is painted.

Objectively speaking, he has not done anything, except for the failed launch of the North Korean satellite. Still, Time named the new North Korean leader the Person of the Year in 2012 in reader voting. However, this 30-year-old politician is the head of the most closed country in the world. This fact already attracts attention to Kim Jong Un. People in different parts of the world wonder whether he begins reforms in the country or continues the traditions of the "communist monarchy." Kim has not given a precise answer to that yet. Maybe the new year will change something?

An important event took place in 2012 in Serbia. A representative of conservative, moderate nationalist forces has become the president on the third attempt. Prior to his victory, Nikolic was beaten by pro-Western Democrat Boris Tadic. The Serbs elected him because he was not ready to give up Kosovo for the EU membership. However, the problem that he has to deal with can hardly be solved. He needs to expand contacts with Russia, return Kosovo and stay friends with the EU. If Nikolic copes with it - he can be considered a wizard of politics.

Former Liberian President did nothing in 2012. He could not do anything, since he had spent many years in a cell of the Hague Tribunal. Judges did everything for himself, though. Taylor became the first head of state to be convicted by an international court to 50 years in prison for crimes against humanity. He was found guilty of mass murders, rapes, illegal diamond trade during the war in Liberia's neighbor - Sierra Leone. Rumor has it that Taylor made his soldiers eat captured enemies during the war in Liberia in 1997-2003.

The Ukrainian president takes the last position on our list. In 2012, Ukraine became an object of international attention on a number of occasions. There was heated debate about the law that allowed to grant the regional status to Russian and several other languages. The law was passed, despite desperate resistance from nationalist-oriented "orange" activists. The European Football Championship became an important event in the country. The controversy around Yulia Tymoshenko continued too. Finally, after the elections to the Verkhovna Rada, Yanukovych was able to secure a parliamentary, yet unstable, majority. As for the strategic goal of Ukraine, the president pointed out the signing of the agreement of association with the EU. However, the Europeans, being unhappy with Tymoshenko's imprisonment, ruined the hope. European leaders gave Yanukovych to understand that Ukraine should not join the Customs Union with Russia, Belarus and Kazakhstan. Russia asked Yanukovych to decide whose side he was on. Yanukovych had to balance. It remains unclear how long he will be able to continue the game with Russia and the European Union.