Jews who struggle for a free Palestine

In 1947, during a meeting at the United Nations (UN) to discuss creating a plan to partition Palestine between Jews and Arabs, Rabbi Yosef Tzvi Dushinsku declared to the entire assembly that Zionism - an ideological political movement created early in the last century which asserts the existence of a Jewish state - did not represent the followers of Judaism, therefore he disagreed with creating a nation-state for themselves. 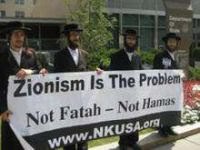 Dushinsku, a Jew of Hungarian origin, lived in Palestine with his family since 1930 and was considered one of the most prominent Orthodox rabbis in the region. He died shortly after the founding of the State of Israel, which occurred on May 14, 1948.

Since the second week of November, the conflicts between Israel and Palestine intensified after a surprise attack by the Israeli army which culminated in the death of Ezzedine al Qasam, one of the military leaders of Hamas, the party that governs the Gaza Strip, one of the few territories remaining for Palestinians since the creation of the State of Israel.

According to information from the UN, until last Thursday (21st), the Israeli air offensive against the Gaza Strip had been responsible for the deaths of 140 people, and 950 wounded, mostly civilians. The number of deaths on the Israeli side, attacked by rockets launched against the Jews, totaled 13.

The action of the government of Israel has resulted in several protests by Jews, within the country, against the military offensive of the state. However, it draws attention from the international community, the number of videos and photos shared on social networks of Orthodox Jews advocating the end of Israel. The most famous video shows the testimony of the young Dovid Weiss, member of the group Neturei Karta (Aramaic "guardians of the city"), created in 1937 from a group that split from Agudas Yisroel, founded in 1912, with the aim of fighting Zionism.

In the video Weiss cites phrases unthinkable for those who always believed that the historical conflict between Jews and Palestinians had religious underpinnings.

"All of the rabbis who lived in the old state of Jerusalem before 1948, can tell you how they lived and coexisted peacefully with their Arab neighbors, such as taking care of the children and each other, during Yann Kippur [month considered sacred in the Jewish calendar ]."

Weiss also denounces that anti-Zionist Orthodox Jews who live in Israel suffer constantly from reprimands or beatings. They are called  "anti-Semitic" by Jews in favor the establishment of the state in Palestine. Semitic is a term that usually refers to Jews, despite the original designation meaning peoples of the same language in the Middle East region, and that includes Hebrews (Jews) and Arabs.

The Neturei Karta organization maintains a website (http://www.nkusa.org) where they try to counteract the image the world has of the creation of Israel as a state. According to the organization, the Jewish religion has been misrepresented by Zionism. In a letter delivered to Palestinians in the Gaza Strip, in July 2009, written by the U.S. arm of the movement, they lament the existence of the State of Israel.

"The true Jews are against the dispossession of Arabs from their lands and homes. According to the Torah [Jewish holy book on religion], the land should be returned to you [Palestinians]. "

This religious line of Neturei Karta, which says to strictly follow the teachings of Judaism, points out that today's Jews have no right to occupy the "Holy Land," located in Palestine. This stems from a religious belief that prevents them from having any control over territory, but guides them to live peacefully in countries where they have to live. The creation of the State of Israel, described in the holy books, in fact, is portrayed as a divine event, and has nothing to do with the material world, a state created by human hands.

"[The Zionists] have used the Torah to legitimize their theft, claiming that they are entitled to the land, sending out the Palestinians, while in fact, the Torah explicitly forbids it. Even more audacious is the claim that [Palestine] was a land without people for a people without land. They should stop saying that, because in those days there was not enough unbiased media coverage, and they had the support of Western powers" they wrote in the open letter to the Palestinians of Gaza.

According to Weiss, the State of Israel creates enemies, such as Iran's president, Mahmoud Ahmadinejad, in order to justify attacks and creating armies to protect Jews in Israel. "But we do not want enemies. We have always lived in peace with Muslims," he added.

In September, a delegation of anti-Zionist rabbis met with Iran's president, Mahmoud Ahmadinejad, during his visit to New York.

Orthodox Jews defend the peaceful demise of the State of Israel. In a video, Weiss apologizes to Muslims and says the only way to repair the damage of decades of Zionist violence against Arabs is based on the creation of a Palestinian state. "After that, there will be peace and those 50 years will be only a nightmare, a mirage that has nothing to do with the truth."

The Neturei Karta movement is accused of being a small sect of extremist ultra-Orthodox Jews by Zionists, but they counter that thousands are scattered in various parts of the world. Indeed, precisely because they would have been scattered fighting for the liberation of Palestine. In Brooklyn, New York, there are only three synagogues linked to Neturei Karta.

The Brasilianas.org is looking for a Neturei Karta community in Brazil. We can help readers to collaborate with more information on the subject.

The Network for the Promotion of Arab Culture in Brazil's mission is to encourage and promote research of the aggregate value of Arab culture to Brazilian culture, and provide integration with various communities in the quest "For Peace in the Middle East and the appreciation of self esteem of the Arab people and their descendants through music, dance and all oriental socio-cultural manifestations that are derived from this ethnic melting pot called BRAZIL."