USA erases memory of its own Holodomor 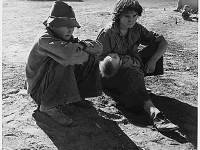 We have been told and retold about Soviet and Communist genocides, about Holodomor of all kinds and colors, which serve mainly to criminalize Europe, former Soviet Union and its Russian heir. America is the holy land and she dispatches her execrations and her drones anywhere. And I don't want these facts to comment anymore.

But I was wondering about the so rich date of 1933. As my readers know, there is an ominous symbolism of the number 33, linked to Dallas, Damascus, Los Alamos and many places. In January we shall have to celebrate the eightieth enthronization of both the unforgettable fuehrer and the disastrous American president turned into history icon, Franklin Delano Roosevelt.

It is well known that Roosevelt was unable to deal (sic) with American great crisis and was despite this fact enigmatically thrice re-elected. It is well known that Roosevelt bombed fifty French towns and killed 100 000 Frenchmen in order to "liberate" France and essentially not to lose an American pilot. It is well-known that through plan Morgenthau our dear Roosevelt planned basically to exterminate twenty-five million Germans after the war; it is well-known that he completely slowed -he and his catastrophic successor Truman, the bomb-dropper - the economic recovery of Western Europe, turned into a new third-world area thanks to his bad will and bleak inefficiency. It is well known that he and his fellows had something to do with General Patton's death (I shall come once to this interesting point). But the most unknown of all is what Roosevelt and his bureaucrats really did to the Joad family!

Remember, dear reader: the Joad are an Irish American family of peasants whose property is seized and who are thus sentenced to die on the road. Their fate is described in the unforgettable and forgotten grapes of wrath. It is an American masterwork written by Steinbeck and an award-winning movie directed by Irish-born John Ford. We see in this un-American movie (!) workers paid 15 cents an hour, exploited by their ruthless employers and bullied by hit men, we see dying old people starved by the so-called crisis, and an industrial quantity of wandering tramps victims of the American dream and New Deal dark agenda.

Anyway, how many Joad were left homeless on the American roads, chased by the sheriff and omnipresent American police? And, after ten years of such a crisis, and ten million people still unemployed in 1938, how many Joad had died: five thousand or five million? See, too, for sometimes the artists are more honest than the historians, a wonderful classic also directed by an Irish author, Preston Sturges, Sullivan's travels. It narrates with humour the misfortunes of a Hollywood blasé and the errands of half Californian population in this nasty period. Yet it doesn't say where stop the interminable errand: in a cemetery? Not only! Tramps and illegal passengers in trains were beaten to death.

So, how many victims for the crisis?

Recently a Russian historian, Mr. Borisov, has opened the debate. Of course don't except American data on the matter: Its' like trying to know the number of dead civilians in Korea, Vietnam or Iraq, not to mention the future martyrs of incoming new Syria! Yet Mr. Borisov (we quote his text translated into English by Mr. Krasnov) underlines an undervalued genocide thanks to simple demographic observations that never upset American historians:

However, since the population of the country was increased by immigration in the 1920s, the population should have increased by 11.3% by the 1940s due to population growth. With all factors taken into account, USA's population in 1940 should have been 141.856 million people. In reality, it was only 131.409 million. Out of the 10,447,000 missing people, only 3.054 million can be accounted for by change in migration dynamics.

I remember that during my studies we were told than there was a vacuum of one hundred million people in communist Russia! One hundred million! Poor Russia! We understand why Siberia is so empty now! Yet Mr. Borisov insists that there are many Americans missing in 1940 thanks to the mistakes and crimes of Roosevelt administration:

Our scientist reminds us the awful reality of that crisis undervalued by American historians, but mysteriously well-recorded by great writers like Erskine Caldwell or Horace McCoy. With so many people unemployed, moneyless and helpless, deprived of their land, and for so many years, how could the demographic bill have not been high?

The start of the 1930s was a true humanitarian catastrophe for USA. In 1932 the number of unemployed citizens reached 12.5 million, with the entire population being 125 million. The unemployment rate peaked in 1933, when there were 17 million unemployed. With their families considered, the number of people without a source of income would be equivalent to the entire population of France or Britain... According to the American Federation of Labour, only 10% of the workers had a secure full-time job.

Many aging people died promptly. But there was also a great vacuum in children, linked too (I must add) to the starving "Dust Bowl" phenomenon. Mr Borisov adds that we can observe, in the generation of children born in the 1930s, a deficit of 5 million 573 thousand children! And he concludes that the great demographic losses of the 1930s cannot be explained by any "decreases in the birth rate". This is a mark left by a huge number of unrecorded deaths, millions of lost child lives. This was the black mark of the Great American Holodomor.

American Holodomor! We should ask a US senator if Oklahoma was a better place than the USSR to live in during the 1930s! Anyway this decennial was awful in many places around the world. But let's continue. As we know, there were many labour camps in America. Usual propaganda and John Ford in his happy ending movie present the government labour camps like a pink paradise. The reality is somewhat different, and Mr Borisov adds passionately:

To occupy the huge masses of unemployed people, Roosevelt introduced "public works"... These public works usually involved the construction of canals, bridges and roads, quite often in unpopulated, swampy and malaria-ridden areas. Overall, between 1933 and 1939, 8.5 million citizens (this number doesn't include criminals, who also had to do public works) have passed through the American GULAG.

People there were treated like in private prisons! Officially, they were paid for this work, but from their monthly pay of $30, $25 were immediately subtracted by the government. The public works administration was run by infamous Harold Le Clair Ickes who organized the deportation of ethnic Japanese living in America into concentration camps during the war! Ickes was labelled the American Beria, as Roosevelt was compared by his predecessor Hoover to a fascist leader (humanitarian Hoover happens at least to have saved many Russian lives during the famine of the civil war). I can add that by the end WW2, American propagandist and scholar James Burnham paradoxically revised three models to characterize the so-called managerial revolution (big technocrats ruling the world): Roosevelt's America, Nazi Germany and Soviet Union! As we see, the systemic criminalization of Russia and Germany (I obviously don't even mention the normal judgement of Nazi leaders in 1946) came later thanks to other agendas and well-informed and intentioned scholars who didn't even forget our ever-repentant France!

I let my readers study the file, read the data and compare their opinions and feelings on this tremendous subject: yet I think that the misdeeds of folks like Roosevelt or Churchill (never forget that British imperial brute) deserve a full library! You can start by studying other Russian writers like Nicholas Balabkin and Vladimir Petrov, quoted by wikipedia (!) and essential to understand better the after-war period and the pains inflicted by an irresponsible America to a mentally and physically destroyed Western Europe.

And I will simply remind my readers that there are under Obama forty-six million "food stamps" Americans and three million convicts, which is more than in the rest of the world, not to mention those of Guantanamo!