The House of Representatives of the United States approved on Thursday (20th) a bill to authorize the budget of the Defense Department, estimated at about $633 billion, during fiscal 2013. 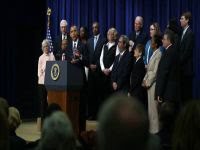 The U.S. Senate could vote today (21st) on the proposal, of which the government can use $528 billion to fund basic national defense and the Energy Department, $17 billion for nuclear weapons projects and $88 billion more for military interventions abroad. The total budget amounts to U.S. $1.7 billion more than what was  requested by Obama.

The voted upon military budget raises questions that bother China. At least two clauses made the Asian country's media reflecting the concern in its pages, one on the issue of the Diaoyu Islands and the other on arms sales to Taiwan.

Another provision calls for the U.S. to sell advanced F-16C / D jets to Taiwan or similar models.

The activist and president of Cebrapaz, Socorro Gomes, criticized the military spending of the United States. "Despite the severe economic crisis plaguing the U.S., the country's military spending does not stop growing."

According to the Center for Disease Control and Non-Proliferation, U.S. military spending in dollars 3 years ago outweighs even the peak moments of the Cold War, as in the case of the Korean War (1952: U.S. $604 billion) , the Vietnam War (1968: U.S. $513 billion) or during Reagan (1985: U.S. $556 billion). The military budget this year surpasses all these fixed expenses cited by the Center.

The activist said that this value is used to feed "the great complex of military bases, Special Commands, Naval Fleet and NATO." The reason, says Socorro, is that all this paraphernalia "is at the service of a very well defined strategy for the U.S.: to ensure its dominance over peoples and nations."

"By increasing its presence in Asia, Africa and Latin America, its aim is clear, to create conditions to prevent the consolidation of new power blocs, besides positioning a force on large reserves of natural resources and major trade routes," says Socorro

Since his re-election, President Obama has barely discussed how he would pare back federal spending.

According to Republicans,  Mr. Obama has not reciprocated with more restraint of entitlement programs.

"We have not seen any good-faith effort on the part of this administration to talk about the real problem that we're trying to fix," said Representative Eric Cantor of Virginia, the House majority leader. "This has to be a part of this agreement or else we just continue to dig the hole deeper, asking folks to allow us to kick the can down the road further. And that we don't want to do."

No. 2 Senate Democrat, said this week that Medicare, Medicaid and Social Security should not be part of current budget talks.

Plenty of money for weapons and foreign intrigue, but the Republicans push for cuts on programs that benefit the people.

An official said the chances of a deal by the end of the year at one in three. "I believe the probability is that we are going over the cliff," he said, "and I think that will be horrible."