The defeat of "apartheid Israel" 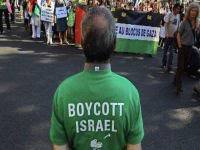 Daughter of the third generation after the Nakba, the catastrophe that characterizes the Palestinian diaspora after their expulsion by the Zionists in 1948, Haneen Zoabi is the first wife of an Arab party to have a seat in the Israeli parliament. Member of the "Freedom Flotilla" that tried to pierce the criminal blockade and bring food and medicine to the Gaza Strip, was classified by Israel as "terrorist."

"Defender of human rights and the value of freedom for all people," Haneen Zoabi stresses that her compass is justice in a world of peace and coexistence, where all live "on an equal footing."

"The Palestinian people will never give up the right to be free in a free territory. The defeat of apartheid Israel," she said. The parliament made a "special thanks to the solidarity of CUT Brazil" and highlighted the relevance of our country in the fight against Zionism.

"The struggle against apartheid is invisibilized by media"

"Eighty-five percent of the Palestinian population was expelled in 1948. Today we are the third generation after the earthquake, 1.2 million Israeli Arabs, 18% of the population of Israel, a racist state, which uses tools for their religious domination. This is the reality of the policy of apartheid, very invisibilized, the media acting as a propaganda tool to justify indiscriminate massacres against the population who are women, children or elderly. In advertising for the dominator, the Palestinians are "terrorists "

"Israel has no constitution, no borders"

"Israel is a country that has no constitution, no borders, but 30 laws that legitimize any abuse. There is a law of 2003, which forbids marriage between Palestinians, and one from 2011, that allows the confiscation of Palestinian land. It is a strategy of war conduccted and exercised against an entire people with the logic that taking more land, means fewer Arabs. The expelled, from 1967, are no longer citizens in this state. Due to the Family Reunion and Naturalization law,for example, those who left Jerusalem for more than six months can lose citizenship. That is, a Jew born in Brazil has more rights than an Arab who was born there. In addition to the confiscation of land, building a house is running the risk of it being overturned because the Home Office has no record that maps it. Thus,  construction is illegal, we are not entitled to be there. Without being able to occupy land, or build more additions. We have 60 thousand homes without permission. Then the state comes in and destroys everything. "

"Besides the conflict over land, there is an identity conflict"

Besides the conflict over land in Israel, there is a conflict over identity, because racism is very present. The confiscation of Palestinian land, the construction and delineation of cities, the disappearance of towns and villages, the laws of education, building parties and civil organizations are part of the same policy of segregation. They want to ban the Palestinian people from living in their territory.

As a Palestinian, one  cannot marry a non-Palestinian, even if they are Brazilian or Syrian. If the husband's father is Palestinian, with an  Arab surname he cannot marry.  Those who live in the West Bank live better than Israeli Arabs, because they are Palestinians, we are not. Due to an absurd law, if we say that we have Palestinian identity, we are not being loyal to the Israeli state. I, a Member of Knesset, cannot be called Palestinian. In official documents we are not Jews. We have no  identity."

"Ministry of Education of the Arabs in Israel transforms ghosts"

"The role of the Israeli Ministry of Education is for us to disappear with our identity. Among its goals is to link to the Jewish State of Israel, link to the diaspora in the world, and strengthen the Hebrew language. I did not exist before 1948, we are all ghosts. In Arab schools, it is forbidden to teach what happened. The literature of resistance is prohibited. It is forbidden to teach about the nationalist revolution of 1952 in Egypt, that Nasser was talking about. All sixth-grade textbooks, for example, are on the Holocaust as a unique human catastrophe. I identify as a victim of the Holocaust more than the Israelis who are repressing us. We must be loyal to the lessons of history: do not kill, do not be racist, be loyal. By killing and discriminating unfairly, Israel is perpetrating a Holocaust. "

"We have no right to memory or history"

"Fifty percent of Palestinians live below the poverty line"

"Often the Palestinian man needs to get out to other places in search of employment, but the woman on behalf of her children, is closely linked to the city. As the communication and transport systems do not reach the Arab cities, everything is more difficult for women, although 54% of Palestinians and 52% of graduates have a master's. Even with better qualifications, we study and stay at home because we have no work. The result is that the entry of Jewish families is three times that of Arab families. Fifty percent of Palestinians live below the poverty line."

"Zionism is a racist project, an obsessive disorder"

"We have fought in defense of a state for all its citizens. This is a project of citizenship that goes against the essence of Zionism that is racist, which is the project of a Jewish state. For the Zionist Jews, the danger posed by Israeli Arabs is the same as the nuclear reactors in Iran. We live in a confrontation between democracy and Judaization, between colonizer and colonized, hence the separation wall, hence the siege of Gaza. The Judaization of the state is an obsessive disorder ."

"The boycott is a peaceful way to defeat apartheid Israel"

"Israel has 60 agreements with European countries and even deal arms with the Brazilian government, to sell planes to Brazil. The fact is that every time Israel expands, illegally annexing the Palestinian territories, it has better relations with the countries of the world. So the Israeli government reads this as support for its expansion, while it should pay the price for this affront to international law. When this illegal expansion is denounced in parliament, a minister immediately ascends the podium and says do not worry, we have good relations and they are improving every day. That is, when you sign an agreement with Israel, it is not only economical, as customarily heard by governments, but a political settlement. It is an immoral support, because Israel is committing crimes "

"We are on the right path"

"The government of Israel will ban me as a candidate in the next elections due to my participation in the Freedom Flotilla, identified as terrorist initiative. The media's political elite promote racism and paranoia towards others, the industrialization of fear to justify its policy against the Arabs. I trust that we will turn this page. I trust in freedom as a natural human instinct. A humanity that Israel tried to tame by its military power, playing their tanks against those who only want to survive. I'm optimistic, I trust in the power of people. The question is not whether we are near or far from the goal, but if the path is correct. We are moving together in the right direction. "