The visit of the President of Uganda, Yoweri Museveni, to Moscow was covered in the local press as confidential. African leaders are not frequent guests in Moscow. They hardly ever have meetings with the Russian president even if they do visit Russia. The latest visit of the Ugandan leader was even more unique. Until recently, Uganda has been an outpost of the U.S. in East Africa. 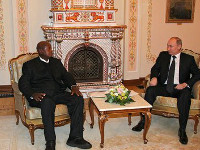 Museveni arrived in Moscow on December 10 at the invitation of President Vladimir Putin to mark the 50th anniversary of diplomatic relations between the countries. However, this visit is highly significant: it shows that Russia returns to Africa. Moreover, it returns to the places of the U.S. dominance. Suffice it to say that a year ago, President Barack Obama sent one hundred military personnel to Uganda to "help" in the struggle against terrorist organization, The Lord's Resistance Army. Uganda is a key mediator of the UN (read - the U.S.) in resolving the conflict in the eastern part of the Democratic Republic of Congo (DRC), the main military force of peacekeeping forces of the African Union (AU) in Somalia and the gateway to the oil fields in the weak Southern Sudan. The country has privileges in trade and a significant turnover with the United States, exporting equipment, optical and medical instruments, wheat and airplanes.

However, the excellent relations of the Ugandan leadership with the West have deteriorated sharply over the last year due to America's never-ending quest to teach lessons of how to live and how to practice democracy. The Americans did not like the fact that in 2011, Museveni won a fourth consecutive presidential election. He sharply criticized the West for the bombing of Libya and disregard to the position of the African Union, which insisted on a settlement of the conflict through negotiations with Gaddafi. Finally, Uganda adopted the "undemocratic" law criminalizing gays, including the death penalty for engaging in sodomy.

It appears that the Ugandan president ran out of patience after the recent accusations stating that Kampala, pursuing his own political and economic interests, supported the March 23 movement and other terrorist groups, which destabilize the situation in the DRC. Museveni in response threatened to withdraw all his military units from the peacekeeping missions in Africa.

"It will be very interesting for me to exchange views on the situation in Congo, Mali and other countries, in the Great Lakes region," said Putin. It means that the Russian leadership appreciates and listens to the objective position of the President of Uganda in foreign policy matters.

But even amid deteriorating relations with the West, Museveni raised many eyebrows  with his pro-Russian and even but pro-Soviet rhetoric. He urged Russia to reset relations with Africa, which, in his opinion, were perfect during the Cold War.

"I came to Russia to express my gratitude for the support that we have been receiving since the time of the Soviet Union. Moscow is like Mecca for free movement ... Moscow is a center that encourages and helps liberation movements," said the leader of Uganda. "It is a great pity that the Soviet Union had problems when we needed each other most. Nevertheless, Russia has recovered. We welcome the position of Russia and China in the struggle against imperialist hegemony. Progressive forces in Africa, working with Russia, China, Brazil and so on, have an opportunity to contribute to world peace," the Ugandan president said.

These statements indicate that Uganda is ready to diversify its relations in the multipolar world. And it already does it. During three years, the mutual trade turnover between Russia and Uganda has had a 20-fold increase: from $30 million in 2009 to $600 million this year. A number of Russian companies already operate in Uganda, particularly, the Kazan Helicopter Plant and cotton processing enterprises. "There is a interest in the cooperation in the field of agriculture, geological exploration, energy, telecommunications, and iron industry," said Georgy Petrov, the vice-president of the Chamber of Commerce.

Ugandan newspaper Daily Monitor wrote that the president came to Moscow to discuss the construction of a refinery, attract Russian companies in the development of discovered deposits of oil and gas. As for the energy sector, Uganda is "at the beginning of the way for the development of oil and gas fields. The explored reserves make up 30 percent of the existing capacity," said Museveni. He referred to the oil fields in Lake Albert (3 billion barrels), whereas the total reserves, according to the latest data, range from 6 to 8 billion barrels. The country looks for investors and experiences an economic boom. There are roads, houses, hotels, hospitals and schools being built in the country. For Russia, this could mean good contracts and a possibility of peaceful expansion into Africa.

As for the procurement of arms, Museveni may have had a confidential discussion with Putin on the subject. Uganda has one of the strongest armies in Africa (UPDF). Suffice it to say that the current government of Somalia relies on the Expeditionary Unit, the backbone of which consists of UPDF units. Two years ago, Kampala bought six Su-30MK2 fighters from Russia worth 740 million dollars. The country also has modern tanks T-72 and T-90, which were also purchased from Russia. According to Daily Monitor, after several old Mi-24 helicopters crashed in Kenya, the Ugandan president made it clear that he intended to upgrade their fleet.

It is obvious that the growing interest of the President of Uganda in Russia can not but raise concerns with the U.S., which included Africa in the sphere of its "strategic interests."