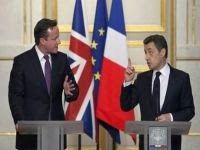 Somewhere between being awarded the Nobel Peace Prize and the consolidating farce of the presentation in Oslo yesterday, recipients were plotting another freedom and democracy bringing "humanitarian intervention," illegal regime change and the destruction of a country in order to save it.

Remember Libya was "not going to be another Iraq" disaster, "lessons have been learned"? Libya's ruined towns and social structure of course, chillingly resemble Iraq. Now, it is Syria's turn, but Syria will "not be another Libya," yes mistakes were made, but lessons have yet again been learned.

Today's (London) Independent cover story reports the: "plan for (the) international coalition to provide air and naval support, plus military training for the opposition," commenting that,"Western intervention is now deemed necessary as civil war has reached tipping point" and of course: "Britain, France and the US agree no boots on the ground."

This is the outcome of a secret meeting in London recently, hosted by Sir David Richards, who heads Britain's armed forces. Participants in the scheming were: "the military chiefs of France, Turkey, Jordan, Qatar, the UAE and (surprise) a three star American General." The paper records: "Strategy was discussed at length," with other UK government Ministries "and their counterparts in allied states" also holding meetings - read plotting another overthrow  of massive illegality, of a sovereign leader and government.

"L'Angleterre, ah, la perfide Angleterre ..." is an expression regarding Britain believed to go back as far as the 13th century relating to acts of "duplicity, treachery and infidelity" in relations with other nation states," states Wiki neatly.

Prime Minister Cameron is determined to involve Britain in more bloodshed, having learned nothing from his disastrous involvement in Libya - sorry, he is: " ... determined that more should be done by Britain to bring an end to the strife ..." That would be a first, and of course Foreign Secretary Hague  ("I have been a Conservative Friend of Israel since I was sixteen") has long been stating that Britain must arm the insurgents and pledging considerable sums to do so.

Seemingly it was blithely decided at the meeting that since "boots on the ground" that is to say., another illegal invasion is to be excluded (we'll see) "training camps can be set up in Turkey" for the terrorists.

The use of air power and maritime forces, it was thought, would be likely to lead to "charges that, as in Libya, the West is carrying out regime change by force." Quite.

Further, a "senior Whitehall official" is quoted as saying: "If this is worth doing , then it is worth doing professionally, training the Free Syrian Army and providing them with air and maritime support."

The conclusion is that another murderous intervention is "now inevitable." French military advisers have apparently met insurgent groups in Lebanon and, "The US is said to have stockpiled weapons retrieved in Libya for future supply" to the insurgents.

The action, as Iraq, is planned to go ahead without UN authorization, since that would certainty be blocked by China and Russia on the Security Council.
\
One multi-million dollar question remains, will Russia and China sit quietly on the sidelines and allow another bloodbath and overthrow, having been so comprehensively duped over Libya?

Oh, and will there be another hapless Ambassador Christopher Stevens type, landing with a contingency of US-armed thugs, from a cargo ship laden with weapons and equipment, or have America's "diplomats" been overcome with a derring-do deficit after the terrible events of Benghazi on the 11th of September?