The Legacy of President Obama...or was that Obomber?

The Legacy of President Barack Obama does not begin or end with his first term in office, it begins now and ends four years hence. Quite what that legacy will be depends not on how Barack Obama will behave, but rather the extent to which he controls his own destiny. Perhaps he will surprise me...perhaps... 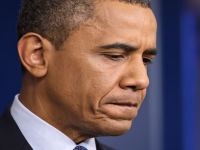 When Barack Obama was elected President of the United States of America the first time around I rejoiced. I rejoiced, not for a number of reasons, because there is only really ever one. And this reason was not because he is black, because he is not. This reason was not because the citizens of the USA came together and said "Racism? Not us!", although it pleased me greatly to see that the race issue did not enter the election in 2008 or 2012.

The reason was because someone who had promised "Change" (remember?), who had stated he was an independent, who had asked for the trust of the citizens of the United States of America to implement his reforms, was swept into office on a tidal wave of goodwill back in 2008.

Back to the title, the Legacy of President Obama...not mine, because I do not have a legacy to defend. True, I have been working with, and defending, Russia since 1971, unofficially and officially since 1976 and true, I have a name as an international journalist. But a journalist is only as good as her/his last article and tomorrow, (s)he is history.

Many are those from my media group of 20,000 journalists around the world who warned me about being so vociferous in my support of President Obama...or let us label him the way he labels his peers. He called President Bashar al-Assad "Assad", so let us call him "Obama".

Or was that "Obomber"? For the sake of goodwill, let us just address him in the same way as he addresses his peers, so... "Obama". While I was waxing eloquent about Obama, many were those who warned me he is a sheep in wolf's clothing, that he is a sham, that he is a CIA creation, that he is the smile on the face of the invisible monster, that he is the head while Hillary "Hey I stepped off an airplane in a war zone" Clinton is the neck, whose tail is wagged by AIPAC.

I defended him, saying he is intelligent, articulate and a diplomat. He won the Nobel Peace Prize. Then he insulted it. He started out being diligent and respectful to his partners in the international community, then he turned against Africa, taking part in the imperialist escapade in Libya, trying to destroy Mummar al-Qadhafi's African Union and substitute it with Africom, something I have been speaking about for years.

The mistake was made in 2011 and we see today that the FUKUS Axis (France, UK, US) sided with terrorists in Libya and destroyed the one model of true democracy the modern world has seen, the Jamahiriya.

True, Obama could have been the victim of the AIPAC lobby controlled by, or rather whose orders are followed by, his side-kick in the State Department (Hillary War Zone Clinton) but now, just before his inauguration for his second term in office, we see tell-tale signs that Libya was no "mistake" but rather, another piece in the puzzle. We see signs that Obama is a sinister fraud, whose claims for change were a lie to his family, his people and the world. We see that Obama is a weak, manipulated puppet, ready to ask "How high?" when his political paymasters and puppet-masters pull his strings.

An intelligent and articulate, informed President of the USA knows very well that the Government in Syria would not and will not use chemical weapons against its own citizens and he knows very well that the terrorists his government supports would, and will. We have presented evidence in this column more than once to this effect and Obama knows that "Assad" would only move chemical arsenals away from the reach of encroaching terrorists that Obama supports.

If "Obama" wishes to tread this path, then I admit in public to all those who warned me about him, that I was totally wrong, that I was naïve and that I was duped by a very good publicity campaign. However, I am a dreamer and I have a dream that the USA is capable of placing an articulate and intelligent person on the world stage who has the ability to mirror the great qualities of his people and of his nation.

I am old enough to know what I am saying and young enough to be a formidable foe for those who attack Russia. There is, however, time for a change of direction, for someone to slam their fist down on the table and throw an existential question towards NATO, or at least to get the lobbies which control this supra-national monster to perpetuate themselves without wars.

I still believe in something, I still believe that Barack Obama is sincere and that he has the resourcefulness to achieve what he promised at home and abroad. He promised to bring the United States of America back into the international fold. Let us see, and the red line starts with Syria.

Many schools of martial arts state that the humiliation is not to withdraw when it is right to do so, but rather to advance knowing it is wrong.

Let us see how Barack Obama writes his political epitaph on the world stage.