Palestine's recognition at the United Nations as a Non-Member Observer State, led the self proclaimed "only democracy in the Middle East" to hurl its metaphorical toys out of the pram, appropriate $120 million of Palestine's dues, and the day after the vote, grab a further vast swathe of land. 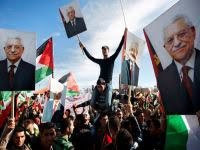 "But then, once in a lifetime
the longed for tidal wave
of justice can rise up,
and hope and history rhyme.
Believe that a further shore
is reachable from here.
Believe in miracles."  (Seamus Heaney, b.1939)

Palestine's recognition at the United Nations as a Non-Member Observer State, led the self proclaimed "only democracy in the Middle East" to hurl its metaphorical toys out of the pram, appropriate $120 million of Palestine's dues, and the day after the vote, grab a further vast swathe of land to build 3,000 more illegal homes. On the 4th of December, Israel announced a further 3,600, thus now a total of 6,600.

It is worth revisiting the original UN Resolution's detailed conditions for the establishment of what James Arthur Balfour had envisaged as: "... the establishment in Palestine of a national home for the Jewish people, it being clearly understood that nothing shall be done which may prejudice the civil and religious rights of existing non-Jewish communities ..." (the 2nd of November 1917).

UN General Assembly Resolution181, of the 29th of November 1947 - sixty-five years to the day before last Friday's landmark vote in Palestine's favour - is enshrined in the Declaration of the Establishment of the State of Israel. That the Palestinian State continued to exist in freedom, not subjugation, alongside the fledgling Israeli one is crystal clear.

On the 5th of March 1948, Rabbi Silver, representing the Jewish Agency for Palestine at the UN, stated to the Security Council, regarding Resolution 181:

"Nevertheless, reluctantly but loyally, we accepted the decision which appeared fair and reasonable to the United Nations.  We feel under the obligation to make our position unmistakably clear. As far as the Jewish people are concerned, they have accepted the decision of the United Nations. We regard it as binding, and we are resolved to move forward in the spirit of that decision."

By the 19th of March, Rabbi Silver was already backtracking: "The setting up of one State was not made conditional upon the setting up of the other State," he told the UN. The intent of the erosion of the Palestinian State had been declared.

Resolution 181 is unambiguous and includes:

"Independent Arab and Jewish States and the Special International Regime for the City of Jerusalem ... shall come into existence in Palestine two months after the evacuation of the armed forces of the mandatory Power has been completed, but in any case not later than 1 October 1948. The boundaries of the Arab State, the Jewish State, and the City of Jerusalem shall be as described in parts II and III below." They are, in minute detail.

"Holy Places and religious buildings or sites shall be preserved. No act shall be permitted which may in any way impair their sacred character."  Which pretty well excludes vandalizing, bombing, walling them in or out, or bulldozing them for parks or museums, as has and is happening, to deafening silence from the UN, UNESCO, The World Monuments Fund Watch List or world governments.

"No expropriation of land owned by an Arab in the Jewish State (or) by a Jew in the Arab State shall be allowed except for public purposes. In all cases of expropriation, full compensation as fixed by the Supreme Court shall be paid previous to dispossession." Comment redundant. Not alone land and homes have been stolen, Palestine itself of course, see 1947 map and now.

"No discrimination of any kind shall be made between the inhabitants on the ground of race, religion, language or sex."

On the 21st of November, as the ceasefire in Gaza took hold, Dutch columnist, author and Visiting Fellow at the US Hudson Institute, Leon de Winter, at a solidarity meeting with Dutch Jews in Amsterdam, told an audience, including Israeli Ambassador, Hiam Devon: "Maybe we should secretly add some means of birth control to Gaza's drinking water." A remark  reported met with appreciative laughter.From ghetto-creating to eugenics.

Incidentally, Gaza's water has of course been mostly appropriated by Israel. During the latest bombing Save the Children reported: "There is no clean water, so children are going to have to start drinking the polluted tap water which is soon going to cause more severe health problems. When they fall ill, their parents can't take them to hospital."

"With so many children already malnourished and suffering from anaemia, the impact on children's health is potentially devastating."

Gilad Sharon, son of former Prime Minister Ariel Sharon exhorted,"We need to flatten entire neighborhoods in Gaza. Flatten all of Gaza. The Americans didn't stop with Hiroshima - the Japanese weren't surrendering fast enough, so they hit Nagasaki too."  Interior Minister Eli Yishai declared that the goal of the current operation is to "send Gaza back to the Middle Ages."

Incredibly, the Honorary Chairwoman of the Israeli Fund for UNICEF, American born socialite, tv and radio host and mother of five, Shalom Nir-Mozes, wife of Israel's Deputy Prime Minister, called for even the passive to "suffer," amongst other shameful, racist comments. Israeli politicians have referred to their Palestinian neighbours as "vermin" and "cockroaches."

So much for: "No discrimination of any kind ..."

"The City of Jerusalem shall be established as a corpus separatum under a special international regime and shall be administered by the United Nations ... To protect and to preserve the unique spiritual and religious interests located in the city of the three great monotheistic faiths throughout the world, Christian, Jewish and Moslem; to this end to ensure that order and peace, and especially religious peace, reign in Jerusalem."

On Sunday the 2nd of December, Prime Minister Binyamin Netanyahu declared that Israel would continue to build in Jerusalem and anywhere it considered to be in its strategic interests.

"Operation in the common interest on a non-discriminatory basis of railways; inter-State highways; postal, telephone and telegraphic services, and port and airports involved in international trade and commerce," has apparently been interpreted as bomb the airport, blockade the ports, rigidly restrict all access by road or border and lay siege to near everything, in or out.

"There shall be a common customs tariff with complete freedom of trade between the States, and between the States and the City of Jerusalem."  Further:"The Joint Economic Board shall endeavour to secure for Palestine's export fair and equal access to world markets."

"Arabs and Jews residing in the City of Jerusalem who have signed a notice of intention to become citizens, the Arabs of the Arab State and the Jews of the Jewish State, shall be entitled to vote in the Arab and Jewish States respectively."

"Accepting the obligation of the State to refrain in its international relations from the threat or use of force against the territorial integrity or political independence of any State, or in any other manner inconsistent with the purposes of the United Nations."

"In so far as Holy Places are concerned, the liberty of access, visit and transit shall be guaranteed, in conformity with existing rights, to all residents and citizens of the other State and of the City of Jerusalem, as well as to aliens, without distinction as to nationality, subject to requirements of national security, public order and decorum."

"Holy Places and religious buildings or sites shall be preserved. No act shall be permitted which may in any way impair their sacred character."

Planning to blow up the Al Aqsa Mosque (est.705 CE), Islam's third most holy site and the Dome of the Rock, to cause spiritual awakening in Israel and build The Third Temple of Jerusalem - a future Jewish holy temple described in the Book of Ezekiel - hardly falls within the spirit of UNGA 181.

Neither does pitching up there, as did the then Prime Minister Ariel Sharon and members of the Likud Party, with a thousand armed guards. Or laying siege to the Church of the Nativity itself (established 333 AD) in 2002, in Bethlehem's "little town."  In May 2011, fifty Israeli settlers barricaded themselves inside Joseph's Tomb in Nablus. On the 4th of December 2012, a mosque in an area under Palestinian civil control was demolished for the second time. Forget " ... public order and decorum (preserving) sacred character," violations of Holy sites are too numerous to list.

UNESCO finally limped in and listed the Church of the Nativity a World Heritage Site in June 2012.

"No discrimination of any kind shall be made between the inhabitants on the ground of race, religion, language or sex."

"All persons within the jurisdiction of the State shall be entitled to equal protection of the laws."

As for Israel's assertion of taking a "land without a people" nonsense, in Resolution 181 "Palestine" is repeatedly referred to, for instance: "Commercial concessions granted in respect of any part of Palestine prior to the adoption of the resolution by the General Assembly shall continue to be valid according to their terms, unless modified by agreement between the concession-holder and the State."

There are plenty more fine, meaningless,  trampled over words and paragraphs. Forced expulsions from their homeland on the birth of Israel have resulted in the Palestinian refugee population being amongst the world's largest. At least six million, of whom the eldest have been waiting over half a century to return home.

Addressing the UN ahead of the vote on the 29th of November, Mahmoud Abbas said, "The General Assembly is called upon today to issue a birth certificate of the reality of the State of Palestine." They did. Israel's  subsequent actions were not only toy throwing, but an attempt to steal the certificate and burn down the Office of Birth Registrations.

But were the actions in the wake of a historic vote on a historic day finally the start of a global wake up call to ongoing and historic injustice?

The UK, France, Spain, Denmark and Sweden speedily summoned the Israeli Ambassadors  as have Australia and Brazil, all condemning the actions. The UK and France are seemingly mooting recalling their Ambassadors to Israel.

Russia and Germany have expressed opposition to settlements. The official Twitter account of Russia's Ministry of Foreign Affairs stated, "Israeli construction on Palestinian territory occupied in 1967 is illegal, unrecognized and condemned by Russia and internationally."

UN Secretary General Ban Ki-moon bleated weakly that Israel's actions would: " ... deal a fatal blow to the peace process," apparently not noticing it died and was buried years ago. A US statement was predictably equally supine "counterproductive."

However, The Palestinian Authority has announced it is to change its name to Palestine.

Belgium has announced it is to upgrade the Palestine Delegation Office to a full Embassy, with the representative to Brussels upgraded to an Ambassador. It is thought other countries may follow.

And on Monday the 3rd of December, the UN General Assembly voted by a landslide 174-6 that Israel joins the Nuclear Non-Proliferation Treaty "without further delay" and open its nuclear facilities to inspection by the International Atomic Energy Authority. Israel, the US and Canada voted against, with three atholls, Micronesia (pop:106,487) Palau (pop: 19,000) and the Marshall Islands (pop:68,480.). There were just six abstentions.

Has Israel finally overstepped the mark? Is it possible that inch by inch, the tide is finally turning, "that a further shore is reachable from here"?