Washington has recently stated the intention to finish "the war on terrorism". The activities of Al-Qaeda should be controlled by special services and the police. These are significant statements and good intentions, aren't they? But why were they made now? Did the Americans stop being afraid of the "ghost of terrorism" that frequents their country?

The main legal adviser of the Pentagon Jay Johnson on November 30 declared that the fight with "al-Qaeda" should stop shortly. According to him, a certain "tipping point" should occur in this struggle, and after that it will be possible to say that it has been destroyed and is incapable of inflicting any serious damage. From that moment the military operation against terrorists should cease, and special services will engage in catching the surviving militants instead of the Pentagon. 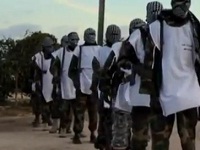 Johnson clarified that from that moment their efforts would no longer constitute a military operation against   "Al-Qaeda "and its allies. This will be the counter terrorist operation against individual personalities, representing the remnants of the defeated" Al-Qaeda." He added that there was no discussion of a peace treaty with the terrorists, as it was unlikely that "Al-Qaeda" would voluntarily lay down arms and cease the struggle. Therefore, the operation against it will continue, just in a different format.

After the completion of the military phase of the operation there will be a question of what to do with the militants of "Al-Qaeda" located in American prisons without charges. They are, in fact, prisoners of war. Johnson refuted the statements of some of his colleagues-lawyers who declared that such practice was illegal, however, he did not provide a direct answer to this question. What is behind this statement? Many experts consider that the true meaning of this turn of events is well hidden from those not involved.

George W. Bush declared a full-scale "war on terror" in 2001 after the act of terrorism in New-York. Since then, the Americans invaded Iraq and Afghanistan, paying for this with the lives of thousands of their military. However, under Bush the declared "war on terror" did not stop.

Bush's successor Barack Obama began withdrawal of the U.S. troops from Iraq and Afghanistan. American special services under him dealt "Al-Qaida" a serious blow. In May of last year in Pakistan terrorist # 1 Osama ben Laden was killed (according to the American Special Forces). At the onset of the "Arab spring" the American officials declared that "Al-Qaeda" became an anachronism in the very Muslim world. However, its burial was premature. For example, in Yemen it has achieved certain successes, and its militants control several regions of the country.

Head of the Pentagon Leon Panetta a few months ago stated that now the U.S. should make greater diplomatic efforts to eliminate "Al-Qaeda." He believes that, despite the definite successes of the military operation, it is not time to weaken the struggle. Panetta said that the threat of Al-Qaeda has not been fully liquidated. He added that the U.S. managed to curb the development of a cancerous tumor; however, this cancer has spread over the entire body of the planet. He noted that for a complete elimination of "Al-Qaeda" military force alone was not enough. Washington must use diplomacy, trade and education in those regions where extremism is thriving.

Head of the U.S. Defense Department stressed that in some areas the struggle would be intensified, including military, diplomatic and intelligence. These are two opinions of high ranking U.S. military officials. It is hard to believe that over a few months the threat of terrorism has sharply declined.

Increasingly more experts recently shared the opinion that the American struggle against "Al-Qaeda" was of a selective nature and in some cases turned into a collaboration for the sake of achieving common goals. According to a Turkish Admiral Türker Ertyurka, Syria is filled with terrorists of all stripes, but "Al-Qaeda" that committed a number of large acts of terrorism in this country is supported by the USA. This was also stated by a columnist of The Daily Telegraph Peter Oborne. He reported that recently the UK and U.S. have been secretly cooperating with "Al-Qaeda" and led a joint struggle against the Syrian authorities.

A year earlier in the course of the campaign to overthrow Gaddafi in Libya, the United Kingdom and the U.S. supported the Libyan Islamic combat group that is a branch of "Al-Qaeda." As discovered later from the reports of American diplomats published by WikiLeaks, militants of LIFG took part in combat actions in Iraq and Afghanistan.

It should be noted that the cooperation between "Al-Qaeda" and the U.S. has a long history. After introduction of the USSR troops to Afghanistan, the USA, hiding behind the struggle for the independence of Afghanistan, began using Saudi Arabia Islamists as a shock force against the USSR. "Al-Qaeda" became a militant force with the U.S. assistance. American transnational corporations and Islamists have one common enemy - independent countries, and they are fighting with them together.

The U.S. has never refused to support Islamists. While making enthusiastic statements about suppression of terrorism, the U.S. gave different jobs to members of "Al-Qaeda." As mentioned above, members of "Al-Qaeda" were used to overthrow Gaddafi. The CIA sent agents to aid the Islamists. In March of last year Obama signed a secret document that allowed CIA to coach and supply weapons to "insurgents". The same is true for Syria.

Many leaders of terrorist organizations reside in Manchester and London. It is not surprising that the U.S. supports Islamists who came to power in Egypt and Tunisia as America has always used them in its political games.

As for the recent "anti-terrorism" statements of the American military, experts believe that they are not accidental. Terrorist acts by suicide bombers that happen in Damascus demonstrate that the U.S. decided to repeat "Salvadoran scenario" in Syria. They want to replace the opposition with terrorist groups.

Barack Obama administration (more precisely, those behind them) by helping radical Islamists count on the control over the entire region and direct the spearhead of the Islamist dagger at Russia and China. Some may argue that the United States does not need a large-scale war. After all, the USA has plenty of its own problems. Last year the country found itself on the verge of a default. Actions of protest against the financial policies of Washington are frequently held in large cities, the State debt has reached a threatening size, some states desire to secede. How would the U.S. keep its leading position in such situation?

The answer is obvious - the USA needs great global upheavals. The current prosperity of the United States rests only on the universal demand for dollars. Unrest and wars automatically boost the demand for this currency. This is a financial "pyramid" of global scale, and its collapse threatens to ruin the global market.

Amidst the chaos of a number of local and regional conflicts merged into a world war, the United States will become a beautiful "quiet harbor" for capital- rich individuals and companies. The military-industrial complex of the U.S. will immediately receive plenty of orders, and warring states will have to get into debt (e.g., before the First World war, America was the world's debtor, and after the war became a creditor). That's why Washington is adding fuel to the fire in various regions such as the Kuriles, the Korean Peninsula, the archipelago Spratly and Paracel island, Afghanistan, Pakistan, Middle Asia, Iran, Syria, Palestine, North Africa and others.

The Americans through their rating agencies inflict serious blows to the Eurozone. Now the Anglo-Saxons started a separate second wave of the financial crisis, with sufficient success. Its beginning is associated with the events in Syria, Israel, Turkey and Iran. The latter has an entire coalition against it: Israel, Saudi Arabia, the USA, and the UK. Tehran is accused of secret development of nuclear weapons. Precisely this "fact" served as a reason for the commencement of military actions in Iraq and destruction of Hussein's regime. "Al-Qaeda" is helping the USA with it. Russia, China, Iran, India, Syria, Turkey, and the European Union (above all, Germany) should coordinate their actions, to keep the world from the new global war.