During attacks this morning, at least 15 people were killed and over 70 injured. According to medical sources quoted by the newspaper Maan, Palestinian victims were civilians and include a lady, 60 years old, a 4 year old and a baby of 18 months. According to sources in Gaza, at least 25 children have died so far. Yesterday UNICEF (United Nations Children's Fund) lamented the escalating violence and called for an immediate ceasefire.

Moreover, according to data from the Ministry of Health in Gaza, more than half of the people killed in the Israeli military operation were civilians up to this Sunday. The spokesman for the organization said that at least 750 Palestinians have been wounded, and many face the risk of death in overcrowded hospitals.

On Monday (19th), Israeli jets bombed a house in Gaza City and killed 11 members of the Palestinian Al Dullu family. Five women, including an elderly woman of 80 years, and four children are among the victims of this attack, which was considered the most lethal of the operation. Witnesses said the wreckage is the only remaining residence in the Sheikh Radwan neighborhood.

Israeli officials admitted that troops bombarded the building "by mistake" due to a technical error that is still unclear, said the newspaper Haaretz. According to the sources cited, the military was trying to target a Hamas leader, but ended up killing "unarmed civilians, including children and babies."

A few hours earlier, at least three children, including a newborn, and two women, were killed in a bombing in the refugee camp of Bureij, reported Al Jazeera.

The number of Palestinian civilians killed should increase further in the coming days with the intensification of Israeli attacks and the lack of evidence that the government shut down the operation called "Defensive Pillar." Rather, the country's authorities indicated they intend to expand the military offensive and more than 75,000 reserve officers have been summoned for a possible ground invasion in Gaza.

Palestinians fear that the operation "Cast Lead," which left thousands dead over the time period between 2008 and 2009, will be repeated. At the time, in just 22 days of Israeli attacks, 1,434 people were killed in the Gaza Strip. According to data from the Palestinian Center for Human Rights, only 235 of those killed were combatants and the vast majority (1,259), civilians.

The Human Rights Council of the United Nations accused Israel of having used "disproportionate force" in that period. According to research from September 2009, the operation "was carefully planned in all phases as a deliberately disproportionate attack designed to punish, humiliate and terrorize the Palestinian civilian population."

In September this year, the agency found that only 25% of buildings damaged during the 2009 massacre were reconstructed.

Source: Opera Mundi
Translated from the Portuguese version by: 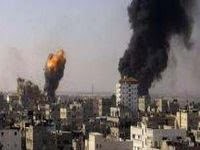