Israel in Gaza: A criminal aggression 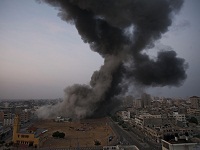 Lying, cynicism and hypocrisy. In Gaza, Israel's criminal aggression has its abominable lie in terms of self-defense. The truth is that ,like all other crimes committed by U.S. imperialism and Israel, the death and destruction has been presented as wrapped in hot and fragrant clothes.

Obama shows no apparent signs of embarrassment facing the numerous Palestinian deaths, "Israel has a right to defend itself, and no country in the world would tolerate missiles falling in torrents falling within its borders." It is an outright lie.

To begin: - Many countries have had to tolerate what they do. Obama is arguably responsible for war crimes in the form and amount of missiles falling on Afghanistan, Yemen and Pakistan. On top of that, there already is the responsibility for the collapse of Libya, Somalia, Iraq and the attempt on Syria. He is also the responsible for threatening to attack Iran, a country of about 75 million inhabitants.

Then we have a question about the very concept of self-defense, an action that requires a defense against the causing aggressor.  Let us start with the fact that last year, none, I say not one Israeli was killed by a Palestinian act.

The truth is that the course of events happening now proves that the Israeli military, as well as the state machinery, acted knowingly and willfully according to a strategic plan. They wanted to get exactly what they are getting.

The immediate goal is to intimidate the Palestinian leadership, and to then remove it from power. Wait now, or in the very near future, there will be a larger war.  This war, from the Israeli point of view, is presented as desirable in itself, and the reason is explained below.

In the long-term, there are two aspects to be considered. The first aspect is the request that Mahmoud Abbas, the head of the Palestinian Authority, based in the West Bank, presented to the UN. The purpose of this request is tied to the Palestinians getting the title and quality of permanent observer to the same organization. The matter is to be resolved in the Annual General Assembly meeting.

The second objective of a major war, now or within the near future, is related to Iran.  With Hamas out of combat, or weakened by bombing - as we have observed the  terror campaign - one flank of Iran would be out of contemplation.

Into this political-military equation enters Egypt, for the good intentions or best interests that it has, it is still not in economic and military conditions to bring its strength and concrete support their words of indignation. Lebanon has its problems, and the recent assassination of the head of security which was immediately attributed to Hezbollah, has has even had a benefit for Israel. Then we know the vile and despicable way Syria has been torpedoed already for a year.

What we are experiencing is a cruel, fierce aggression by one of the nost heavily armed nations in the world against one of the most oppressed people on earth. We have 1.7 million people here, mostly refugees, who were violently expelled from their homes and farms to be confined in the largest prison under open sky.

This population imprisoned between concrete walls suffers from hunger, dispossession and injustice, having to endure continued attacks. It's macabre. Van Auken underscores in context that resorting to militarism and war is taking on an increasingly fascistic character a disgusting, repugnant character.

As an example, he pointed out that the son of Ariel Sharon, the former prime minister of Israel, had argued in a column of the Jerusalem Post that entire regions should be pulverized [flattened], and sent a memo to pulverize Gaza as such [flatten all]. He then added that the Americans had not been content with Hiroshima, but had also continued with Nagasaki. In this article, the son of Ariel Sharon had finished by saying they should not have electricity, gasoline or moving vehicles in Gaza. They should have nothing.

But, as we saw, this would not be the first time that such ideas were heard. As reported recently, the Minister of Interior Affairs of Israel, Eli Yishai, has reportedly stated that, in turn, Gaza needed to be bombed back to the Middle Ages.  He specified that roads, the water supply, electricity and everything, the entire infrastructure of Gaza should be bombed and destroyed.

We note here that in the context presented above was noted that the international outrage at the massacres carried out by Israel, but backed by the United States, are undoubtedly also felt by many conscious intellectuals in Israel.

Which ends with the massacre in Gaza. No lies or propaganda can keep us from the ability to see, feel and understand ourselves. We are humans, not bestial animals.