Israeli atrocities against the Civilian Population in Gaza

I send this message with tears, that I never cry, but this destroyed building is 500 meters from my house, and pictures of children killed upset me.

Out of excitement, I want to show you the reality of everyday Gaza under intensive Israeli bombing and attacks.

The world's most "moral army" of Israel committed a new massacre this Sunday, November 18, 2012.

The Israeli aircraft bombed a 5-storey building in Gaza City, a building that houses 40 people, belonging to the Dalou family:  12 people died in the Dalou family, among them: six children, three women and two seniors.  There were 25 wounded.

Sorry about the shocking photos taken by a photographer friend who is in a difficult psychological situation after these terrible images I think human rights and the rights of children organizations are asleep.  I do not know when they will wake up?

A new Israeli crime against our children and civilians, a new massacre against humanity...

And a new silent complicity of the countries that claim to defend human rights.

I have to send these pictures, friends, good people, associations that support our noble cause, to try to calm my anger and the wrath of Gazans.

It's horrible, terrible, but the reality is harder for Gaza.

The duly elected Prime Minister, Ismail Haniyeh  condemned the Israeli attack and called on the world community to assume its responsibility to deal with the Israeli crimes against Gaza.  The hypocritical west, while proclaiming itself the "guardians" of democracy, have consistenly failed to deal with the government that the Palestinian people elccted in a free, democratic election for no reason other than they don't like them and their policy not to recognize Israeli's "right to exist."

For his part, Dr. Sami Abu Zuhri, the spokesman for the Islamic Resistance Movement "Hamas" stated that the massacre of the Dalou family is evidence of the Israeli military failure that wants to compensate for its failure through targeting civilians, stressing that Israelis will pay the price.

No to state terrorism of Israel 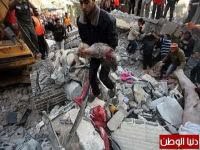