Russia to return to Afghanistan after US occupation

In an anticipation of the withdrawal of Western troops from Afghanistan, Russia strengthens its activity in Afghanistan. Hamid Karzai's government is ready to cooperate. Karzai ordered to build a Russian Cultural Centre in Kabul. Ordinary Afghans support the return of the Russian Federation too. Will the current government find a compromise with the Taliban? The answer to this question means a lot indeed. 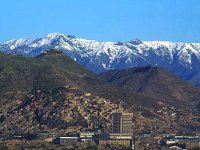 It is obvious that Moscow's interest after the withdrawal of NATO troops from Afghanistan, scheduled for 2014, will increase dramatically. This country has always been in the zone of Soviet and Russian interests. For example, on 27 March 1919, the government of the Russian Federation was the first of all other states to have officially recognized the independence and sovereignty of Afghanistan.

In the 20th century, the Soviet Union managed to become one of the most important foreign partners of the country. In 1979, the Soviet Union deployed its contingent in Afghanistan at the request of the Afghan government to prevent a civil war, but became embroiled in a festering conflict. After the withdrawal of Soviet troops in 1989, the general opinion of this assistance in both Afghanistan and Russia was negative.

Everything is relative. Nowadays, after what the Americans leave in Afghanistan, the Soviet presence seems to be a blessing. Soviet soldiers are remembered with respect in Afghanistan. They did not trample the dignity of the Afghans in the mud and could negotiate.

It is symbolic that it is the Russian culture and language that return to Afghanistan first. Kabul has launched the construction of a new Russian Cultural Centre, Reuters reports. The center is expected to open its doors in 2014. The new center will teach the Russian language, music, dancing and traditional Russian crafts. There will be a large concert hall, reminiscent of the one that used to be in 1983, the Russian ambassador in Kabul, Andrey Avetisyan, proudly said.

"We are here in the region, and will stay here forever. And to have a good, friendly and good neighborly relations, one needs to start with the development of the cultural component," said Avetisyan. According to the ambassador, the interest in the Russian language has been growing among the Afghans, as local people regard Russia as an important partner in Afghanistan in the post-American period.

Mohammad Rahim Banaizada, one of six teachers of Russian at the University of Kabul, sticks to the same opinion. "Our students are too young to worry about the past. Instead, they consider the Russian language as a bridge to the realization of their social and economic opportunities," said Banaizada. He noted that the number of students, who study Russian at the University today is five times larger than it was five years ago. "Russia is our neighbor, we love its culture. All was well, when the Russians were here," a third-year student said, Reuters reports.

Russia's political line in Afghanistan is at the stage of development. It will depend on specific threats and, above all, on the activity of the Taliban and the ability of  Karzai's government to retain power. It is obvious that one needs to create new regional vectors of influence with Pakistan, India, the CSTO countries and especially Kazakhstan, Kyrgyzstan, Tajikistan and Uzbekistan. Today we can say with certainty that Russia will face the need to combat drug trafficking that has increased hundreds of times during the stay of NATO troops.

One shall expect the strengthening of the terrorist threat too. The situation in Afghanistan is already deteriorating in all regions of the country. The Islamic Movement of Uzbekistan (IMU), which dominates the north, poses a considerable threat to former Soviet republics. The movement conducts the "mine war" and carries out terrorist attacks. Most likely, one will have to send Russian military advisers to help the local army and police. However, the Russian government sees prospects for peace, otherwise there would be no need to revive the cultural center.

The main direction of Russia's peaceful return to Afghanistan is economic assistance and investment in infrastructure, which was built by Soviet specialists almost entirely and is still maintained with the help of Soviet technology.

The first meeting of the Russian-Afghan intergovernmental commission on trade and economic cooperation took place in March. In 2011, the trade turnover between the two countries totaled $984.96 million, and thus increased 12 times as compared to 2004.

The "transit capacity" of Afghanistan in implementing TAPI gas pipeline (Turkmenistan-Afghanistan-Pakistan-India) and CASA-1000 (the construction of electric power line from Kyrgyzstan and Tajikistan to Pakistan via Afghanistan), in which Russian companies are actively involved, is interesting as well. Finance Minister Omar Zahelval noted that Afghanistan was interested in the projects related to transport and construction.

"We are ready to consider special conditions for Russia's participation in the reconstruction of the Kabul house-building plant and a cement factory of Jabal Seraj," said Zahelval, noting that Russian companies could count on privileged conditions in those projects. But the most important task is to develop the program of reorientation of Afghan peasants to grow food instead of opium poppies.

The Americans try to make everyone believe that Afghan farmers can not do anything else, but this is not true to fact. The Federal Service for Drug Control of the Russian Federation says that the opium production in Afghanistan reduced during the last period when Talibs stayed in power. However, the production of opium increased sharply after the occupation of that country. In 2001 (the last year of the Taliban rule in Afghanistan) there were 185 tons of opium collected, and in 2004 - 12,000 tons. According to the service, the opium production in the country has increased by 44 times for the past seven years.

Russia's plan "Rainbow-2", which, in contrast to Western eponymous plan "Rainbow", is to recover the economy and Afghanistan as a whole through the development of infrastructure, especially in the field of energy and electrification.