Gaza: They have Names

As I write the lost in Gaza have reached fifty-two, the injured five hundred and sixty. The Al Shifa Hospital has reported being close to running out of generator fuel - thus incubators, life supporting equipment will close down lives. Medical supplies are perilously low.

Israel decides how many calories the people of Gaza deserve and indeed what food (as all else) they can import. They now, again, decide who of the 1.6 million fellow human beings in the tiny Gaza strip can live or die.

The massively disproportionate response to rocket attacks on their country is reported to aim at reducing Gaza to a pre-industrial age, identical to the expression used by then US Secretary of State James Baker regarding Iraq in 1991.

Israeli government spokespeople gloss over this threat by talking of:  pinpoint accuracy, surgical strikes, incursions, rather than invasion (whether by air or on the ground).

But the dead are mothers, fathers, uncles, aunts, grandmothers, grandfathers, they  are children, students and babies on the threshold of their tenuous, calorie-restricted, walled in, embargoed life. And they are not "collateral damage," or "unfortunate accidents" or a collective number of "casualties." They have names and ages, are living beings who were with us days or hours ago and who have been disposed of as casually and coldly as a clear out of the unwanted accumulation in a domestic cupboard.

A twenty-two year old Palestinian university student has been compiling names. Given the continually cut communications, the logistics of moving about as the missiles fall, it is still incomplete, but here it is - for now:

Today the bodies of Jumana Abu Sefan, eighteen months old, and her brother Tamer, three and a half years old, are added by this writer.

It is perhaps worth repeating again, James Arthur Balfour's words to Lord Rothschild on the 2nd of November 1917.

"His Majesty's Government views with favour the establishment in Palestine of a national home for the Jewish people, and will use their best endeavours to facilitate the achievement of this object, it being clearly understood that nothing shall be done which may prejudice the civil and religious rights of existing non-Jewish communities in Palestine, or the rights and political status enjoyed by Jews in any other country." (emphasis mine)

Palestine is thus, of course, rightly acknowledged as a country in its own right, the Jewish people, if you will, guests, not rulers, conquerers or occupiers. Palestinians' civil and religious rights have been grievously ignored, trampled and prejudiced from day one. Continuing crimes of enormity are mass murder and massacre.

Nicholas Wood, author of "War Crimes or Just War" (i) and his wife, Sara, have designed a large placard which perhaps puts into context the injustice heaped on Palestine by a people whose collective psyche is dominated by another unimaginable historic injustice.

I am to blame
I shot a rocket back.

It is hard not to ponder on whether "the only democracy in the Middle East" should perhaps take a long, thoughtful look in the collective mirror. 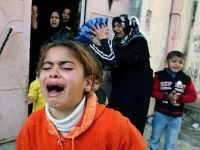