Russia accuses U.S. of coordinating and arming mercenaries in Syria

The Russian Foreign Ministry spokesman Alexander Lukashevich said "it is common knowledge Washington is aware of the delivery of various types of illegal weapons to illegal armed groups operating on Syrian territory." The Chief of Staff of the Russian Armed Forces, Nikolai Makarov, said mercenaries in Syria possessed the US manufactured Stinger.

The Russian Foreign Ministry spokesman Alexander Lukashevich, on Thursday accused the government of the United States (U.S.) of coordinating the delivery of all types of weapons to the mercenaries in Syria, since last March, trying to topple President Bashar al Assad.

"It is common knowledge that Washington is aware of the delivery of various types of illegal weapons to armed groups operating on Syrian territory," said the Russian Foreign Minister.

''He added that U.S. officials and the press said Washington coordinates deliveries of missiles and provides logistical support to the supply chain."

The Foreign Ministry said the European nation and the U.S. "Provide coordination and logistical support for these deliveries."

On the eve, the Chief of Staff of the Russian Armed Forces, Nikolai Makarov, warned that mercenaries in Syria possessed portable antiaircraft missile systems, among which are the American manufactured Stinger.

Given these allegations, the spokesman of the U.S. State Department, Victoria Nuland, denied these accusations.

Lukashevich reiterated the call by Russia for all countries, "to cease aid to rebel groups in Syria and do everything possible to prevent portable antiaircraft missiles falling into the hands of uncontrolled people, especially after the rebels threatened to attack civilian aircraft."

On the 28th of September, Russian Foreign Minister Sergei Lavrov reiterated the need to implement the agreement reached last June 30 in Geneva by the Task Force to Syria, which calls for the cessation of violence in that Arab country without the need for President Bashar Al Assad to leave power.

During his speech to the 67th General Assembly of the United Nations (UN), Lavrov accused the international body of aggravating the situation in Syria by failing to implement the Geneva agreement for a peaceful transition in that country.

In turn, he said that "those who oppose the application of the Geneva statement assume a huge responsibility," therefore it "insists on a ceasefire that would tax only the government and encourage the opposition to intensify hostilities."

The Damascus government has complained on numerous occasions to the UN and the international community that nations like the U.S., France, Britain, Saudi Arabia, Qatar and Turkey are responsible for arming and financing the opposition and terrorist groups. 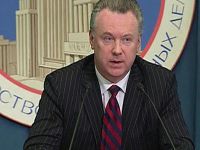