Moldova faced a critical situation with waste disposal, and observers are talking about "trash apocalypse." The country has completely destroyed the system of waste disposal. The existing landfills are poorly equipped, which is why the residents of nearby areas suffer from oncological and other diseases. 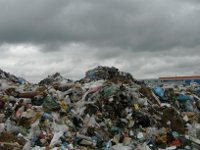 The environmental situation continues to deteriorate in Moldova due to the increased emissions of solid and liquid waste into the environment. Despite the program proposed by the Ministry of Ecology to reduce the number of landfills, the waste disposal issue is far from resolved. Statistics shows a deplorable state of the environment polluted by industrial and domestic waste. There are over 1,900 landfills in Moldova. Their number exceeds the European norms tenfold.

There is no effective monitoring system in place that would allow the fight against this evil. Illegal dumping occurs everywhere, but the local authorities are unable to cope with this phenomenon. In small settlements the garbage is not removed at all. Often the economic situation in such settlements is poor, and funds for the maintenance of dumps are not allocated. In other words, city authorities and the majority of the population consider the problem of waste disposal secondary. Residents generally take out their garbage to the wasteland outside of the city and leave it there. Often all the garbage from households is dumped on the outskirts of the villages, and occasionally an excavator levels out the waste or dumps it into a ravine.

Mereni village, located to the south of Chisinau, is no exception. Local residents complain of health issues as landfill is constantly smoking. "Sometimes it is impossible to breathe. Debris is flying everywhere. We no longer drink water from the well. It is bitter, and only increases thirst. At least there are artesian springs in the area. The authorities have long promised to move the landfill out from the village, but it is still there," a villager complained in an interview with Western journalists.

The situation with the processing of waste in Chisinau is not much better. For many years, all the garbage was dumped in a landfill located near the village Tsyntsareny. The term of its service expired in 2011. Recently, the number of complaints from local residents about growth of cancer and respiratory diseases has increased. The landfill was shut down, but there was no monitoring of the environmental conditions.

A large part of the waste from the capital is now brought to the unsecured landfill near the village Bubuieci. Local officials have strongly opposed the decision. According to the mayor of Bubuieci Jonah Sherenutse, the temporary landfill is illegal and contributes to the deterioration of the ecological conditions in the area. The number of insects, rats, and stray dogs has dramatically increased.

The emergence of a garbage crisis in Moldova is the result of the government policies implemented since 1990s. Before the collapse of the Soviet Union, the country carried out comprehensive measures to create landfills and incinerators. Later waste disposal programs were stopped. Meanwhile, the media is reporting increasingly more about the fact that Moldova is turning into the dump of Europe. Environmentalists are sounding the alarm, saying that the country may be facing "garbage apocalypse" in the near future. In 2008-2011, an Italian company, in an attempt to take advantage of the situation, tried to export municipal solid waste from Europe to Moldova to load the capacity of the new incinerator. However, its construction was suspended due to complaints from the "green."

Recently, the Minister of Environment Gheorghe Salaru admitted that the problem of landfills in the country has existed for the past 20 years and is mainly due to erroneous policy in this area. In accordance with the accepted norms, one landfill is allowed in each settlement. In Moldova, there are 800 settlements (each of them has 2-3 landfills).

According to the Integrated Waste Management strategy proposed by the Ministry of the Environment, by 2016, 50 landfills should remain in Moldova, and with time their number will be reduced to 10, reported the Moldovan portal Vse.md.

The Ecology Minister had to admit that the problem of landfills requires multimillion-dollar investment. So far, the proposed program is far from implementation. The Moldovan authorities have lost a great deal of time due to corruption and political intrigue surrounding the construction of the incinerator. Moreover, the number of illegal dumps could increase even more if effective measures to organize the collection and transportation of solid waste are not taken, especially in small towns.

The urgent measures to save the cities and villages of Moldova from the garbage crisis are needed today, or the environmental impact of the current inaction will be very sad.