On Wednesday, the Turkish military attacked various targets inside Syria in what has been the most serious in a series of border incidents in recent months, after that it reported the deaths of five Turkish "civilians."

The information was released by Turkish Prime Minister Tayyip Erdogan, who through a statement said the attack was a "response" to a mortar fired from Syrian territory.

"At least five people, including a child, died in Turkey as a result of a shot fired from Syria.  A howitzer reached a house in the resort town of Akcakale on the border," justified the text.

According to the Ankara government and its armed forces, they "followed the international rules of engagement" which dictate that "we cannot leave unanswered this 'provocation' of the Syrian Government"

After introducing the incident, the North Atlantic Treaty Organization (NATO) convened an urgent meeting of its members to discuss the missiles launched from both countries.

The Turkish decision to bomb Syria was announced after a meeting between Prime Minister Recep Tayyip Erdogan, Foreign Minister Ahmet Davutoglu, and the head of the armed forces.

Davutoglu also telephoned the secretary general of NATO, Anders Fogh Rasmussen.  Deputy Prime Minister Bulent Arinc invoked, without naming it, Article 5 of the North Atlantic Treaty, which requires all member countries to respond when one of them is attacked.

Article 5 of the North Atlantic Treaty Organization provides for the collective "defense" to a attack on one of its members.

Last year, the military intervention of NATO in the Libyan conflict against the government of Muammar Al Gaddafi caused more than 50,000 deaths in the North African country, of which the majority were civilians.

Officially from the Syrian side:

"In case of border incidents that occur between any two neighboring countries, countries and governments must act wisely, rationally and responsibly, particularly since there's a special condition on the Syrian-Turkish borders in terms of the presence of undisciplined terrorist groups spread across the borders who have varying agendas and identities," the Minister told the Syrian TV, affirming that these groups constitute a threat to Syria's security and regional security...

Syria bases its conduct with neighboring countries on good neighborly relations and respecting the sovereignty of countries, and that Syria asks in return that its sovereignty be respected, in addition to cooperating to control borders and prevent militants and terrorists from sneaking across, which is what Syria always does." 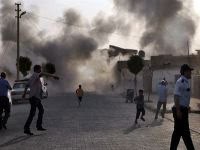 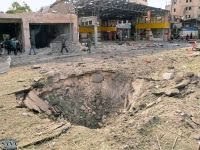 Cui bono?  The logical question for anyone to ask is "who benefits?"  What possible benefit does Syria get by drawing in Turkish attacks or causing Turks to run whining to its NATO partners to go and attack Syria?  The Turks have been itching to attack Syria and to get their partners to do so also.

At the UN Security Council, Sergei Lavrov expressed deep regret over the refusal of western countries to condemn any terrorist bombings or activity in Syria.  So much for their fake "war on terror."  Why would they condemn something they are directly responsible for?

Breaking!! Leaked Video of the FSA Terrorists Behind False Flag Attack on Turkey