Europe likes to boast of its tolerance and multiculturalism, blaming other countries for human rights violations, however, it cannot do away with the discrimination against Gypsies. Residents of a district of Marseille, France, angry about poor sanitation and crime, burned down a Gypsy settlement. Other Europeans keep up with Marseille as well. 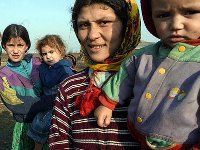 The residents of Marseille told the authorities that it was necessary to take steps to evict the civilized camp, but they were not heard. Then on September 28 they burnt 40 houses in the camp, scaring away all of its residents, the newspaper La Provence reported. Police arrived at the scene, but no one was arrested because "there was no physical violence." What good is there in the fact that President Francois Hollande in his campaign vowed that he would not expel Gypsies like Sarkozy did? The residents are chasing them themselves, because there has been no action in solving the problem of employment.

The Interior Minister of France Manuel Valls disagrees with Hollande. He said during a recent visit to Bucharest that the government would continue to eliminate slums and fight the illegal crossing of French borders by foreign nationals. Deportation without resettlement continues at the same pace as before, at the risk of destroying the delicate balance between the French and the Gypsies, said Laurent El Ghozi, one of the four founders of the Romeurope group supporting the Gypsy minority.

The tense situation has developed in other EU countries - Italy, Spain, the Czech Republic and Portugal, where the Gypsies migrated from poorer Romania, Bulgaria and Hungary. In Eastern Europe, there are seven to eight million Gypsies. There, for the most part, they are not citizens of their respective countries, and have no rights and the ability to work. Even outside of the Schengen area, with tenacity they are "taking over" the more affluent neighbors, including northern Europe.Recently, the Parliament of Norway discussed the issue of the settlement of 200 people near Oslo. In Italy, home to 700,000 Gypsies, former Prime Minister Berlusconi, along with Sarkozy had tough measures against them. He entitled the prefects of the cities to expel them from the country, even if they were citizens of the EU. A year ago, the country discussed the case of kidnapping by a gypsy in Turin of a two-year-old girl right out of a supermarket cart behind the child's mother's back. In the same area three months ago cases of burning of Gypsy settlements were reported.

In tolerant Portugal residents of the city of Beja erected a brick wall to separate themselves from the troubled Gypsy neighborhood. There are many holes in the wall, so there are not many practical benefits from it, but the bars on the windows of the houses and guard dogs are helping the cause. In the Czech Republic, the residents of Litvinov city provide moral support to the radical-right Workers' Party in its confrontation with the local Gypsy settlement. A year ago, only the police cordons were able to prevent lynching. The Ministry of Internal Affairs of the Czech Republic warned that the country's neo-Nazi movement relies on terrorism to achieve its main goal - the expulsion of Gypsies.

In neighboring Slovakia there are special schools for Gypsy children. Even Spain, home to about a million Gypsies touted by the European Commission, has its problems. Statistically, only 5 percent live in "ghettos", but only one in four is registered by the social services. 85 percent go to school, but only 35 percent graduate, and so on.

Statistics aside, the real situation is very alarming. In Madrid around 10 thousand Gypsies have settled. Something has to be done with this mass of Gypsies near the capital, but no one knows what exactly. Some governments sigh with relief when the troubled neighbors are gone, others want to solve the problem, but it does not work, and not because of the crisis alone. Why does the issue persist? The Europeans do not want to integrate the Gypsies and vice versa. Gypsies prefer theft, fraud and drug trafficking to work. The French police have recently made arrests of young pickpockets from the settlement in the suburbs of Paris. The youngest was 9 years old, and all of them were from the so-called Hamidovic clan that accounts for 75 percent of robberies in the Paris Metro.

Of course, this is just the tip of the iceberg. Gypsies do not pay taxes, do not want to work and do not send their children to school, and even attack government officials. "Gypsies appear like ghosts, invade the offices or municipal officials and emerge at the meetings of local legislative assemblies, and even seek personal meetings to solve their problems in an inadequate form," said an employee of the Portuguese Center for territorial studies.

The policy of all governments in Europe is criticized. The UN report states that forced evictions are unacceptable and alternative solutions should be sought in accordance with the human rights standards. "Evictions continue and threaten to bring the entire families to situations of extreme vulnerability," said in a statement a speaker of the commission for minorities, immigrants, housing and racism.

But this criticism is useless. Europe continues suppressing Gypsies. It all sounds good on paper, but once a camp settles nearby, the locals begin to take measures. The negotiations on the return of Gypsies to their homeland end in failure. For example, the Spanish side argues with Romania that they should take their Gypsies back since Spain has 25 percent unemployment rate, and Romania - only 7 percent. Romania, in turn, is ready to take them back, but is unwilling to pay for the deportation. Gypsies do not care since they make a living not by working, and the average Spaniard has more money than the average Romanian.