Is there a place for nuclear waste on Earth?

In the north of Germany, fifty activists of international organization Greenpeace held a demonstration to protest the arrival of fuel rods with plutonium and uranium for the nuclear power plant in Grohnde. According to environmentalists, their use raises the risk of accidents. Is there a safe place left in the world for the disposal of nuclear waste? 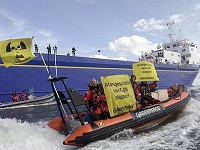 Last Sunday, fifty Greenpeace activists on 12 inflatable boats conducted a  20-minute protest action on the Weser River near the town of Nordenham. Their action was held against the transportation of plutonium fuel rods for a German NPP from Sellafield (UK) to Germany. One of the demonstrators, according to Spiegel-online, even managed to climb onto the nose of the cargo ship. Bernd Ebeling from Contratom (the man who initiated the action) told German online publication nwzonline: "This is a symbolic action. We can not delay the transportation of nuclear materials."

Environmentalists are concerned because the rods may be defective. The Sellafield nuclear complex experienced serious technical problems during the recent years. After the disaster at Japan's Fukushima, the UK government decided to shut down the complex, German agency dpa said.

Ordinary Germans could witness the transportation of dangerous goods in the late 1980s, when the Atlantic Osprey with eight rods of nuclear waste docked at a German port. This week, however, there were two vessels with nuclear waste. After the cargo was unloaded at the port, special transport delivered the hazardous cargo to the point of destination.

The Russian law prohibits the import of radioactive waste on the territory of the country. However, it does not mean that the problem does not affect Russia at all. In 1981, a Soviet nuclear submarine K-27 with two reactors was sunk in the Kara Sea. The Minister of Environment of Norway asked journalists to not exaggerate the dangers and risks associated with the sinking of large amounts of nuclear waste during the Soviet period. However, the subject periodically reappears in the news.

Russian media quoted the Director for Nuclear and Radiation Safety of Russian federal nuclear agency Rosatom, Oleg Kryukov, who said that the corporation planned to export radioactive waste from the Kamchatka region for their subsequent disposal. "In 2014-2015, we will be launching the project to remove radioactive waste from Kamchatka. The waste with all necessary security measures will be removed for further decontamination and final burial," the official said.

A question arises - where to? Chinese Taoists, and not only them, believed that human beings are only a part of the Universe. Today, there is no sense in disposing nuclear waste, taking it, for example, to "underdeveloped countries." They have their own intelligentsia - the people, who are familiar with the problem of nuclear waste disposal. But most importantly, they have no protests (a consequence of the absence of civil society) and no appropriate locations for such practices, that is, for disposing nuclear waste.

Modern scientists have not yet developed a safe way to destroy spent nuclear fuel - they transport radioactive waste to repositories instead. Apparently, this is an issue for the next generation to solve, not ours.

Is there a way out of this vicious circle? An expert on global catastrophes of the Russian transhumanist movement, an employee of the Center for Civilizations Research of the Institute for African Studies, Alexei Turchin, the author of "War and Another 25 Doomsday Scenarios" offers the following:

"The analysis of global risks shows that they can (if they can) be reduced only with the attraction of very serious (if not all available to mankind) resources. Secondly, they can be reduced owing to concerted actions taken by all states. The role of each state in this joint effort to a large extent is determined by what kind of resources (from the intellectual to natural) a particular state has at its disposal (and control), because they can serve as a tool for both solving and creating global problems. It is also easy to see that the catastrophic phenomena of global scale in a number of scenarios may turn out to be a consequence of some blunders made by single states. Thus, considering the question of global risks, we inevitably come to the subject of responsibility."