Syria: The Opposition and terrorism

The west has once again armed, trained and supported terrorist forces in an internal conflict in a sovereign nation, breaching international law; the murderous activities of this scourge is the responsibility of the operationals on the ground and their foreign military and political backers. Once again, the FUKUS Axis is in deep trouble. 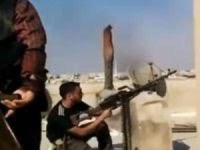 The hand of the FUKUS Axis (France, UK and US) was visible in Libya, where Benghazi was used as a base as the Libyan government slowly lost control of the Cyrenaica region, after which tho0usands of terrorist mercenaries poured into Libya from the already-secured frontiers of Tunisia to the west and Egypt to the east. The shocking crimes of these terrorists are the responsibility of their masters overseas and these were drawn up in an indictment presented by the author et al (*).

The International Criminal Court at The Hague has not to date even acknowledged receipt of the document, let alone open an investigation and delivery to the European Court of Human Rights merited a cryptic message that this would not be investigated by this court.

Moving on to Syria, it is patently obvious that the Syrian Armed Opposition (the Opposition is split into tens of factions, some of which are conciliatory and unarmed, most of which are totally against the barbarity of the FSA, the so-called Free Syrian Army, which bears all the hallmarks of a FUKUS terrorist force, given the degree of atrocities and the lying by western media about who or what is really perpetrating the crimes.

With the recent history of the FUKUS Axis ringing in our ears, how can these countries expect to have an iota of credibility any more? Their own actions long ago smashed any idea that they stand for anything other than the interests of the lobbies that control their governments.

We only have to look at the last few days to see the type of atrocity carried out once again by terrorist forces the west (France, UK and US) have launched but which have turned into a monster): kidnapping of Christians (most freed by the Syrian Armed Forces), terrorist acts in Damascus with CIA-style bombs against Syrian Army targets (Umayad Square).

And now, a terrorist strike against Press TV Correspondent, the universally respected Maya Nasse, who has been murdered today by the bullet of a terrorist sniper. Was the FUKUS Axis directly involved, or was it some of the scum they support and call "freedom fighters"? Does a freedom fighter murder a civilian?

The man who gave his life for the truth, because he loved his country and knew what the terrorist scourge assailing it is really like has left us, however many more will take his place, carry on his work and fight his fight. Let the terrorists fight men with arms like men, not cower behind the murder of civilians. But then again they wouldn't would they?

All the FSA is good for is raping girls, slicing the breasts off women, kidnapping Christians and committing terrorist atrocities. And now how about someone holding the FUKUS Axis responsible together with the political leadership of these countries?