The arrest, the prosecution and finally the conviction, after a brief trial, of three members of the Russian musical band named Pussy Riot has been the focus of much attention in the western world, to become the pretext for an indictment without appeal against the government of Vladimir Putin and against that Russia he represents.

Let us briefly recall what happened in Moscow on the 21st of February 2012: five belonging to the punk-rock group Pussy Riot, founded in 2011, entered the Cathedral of Christ the Savior, and three  of them women, Nadezhda Tolonnikova, Yekaterina Samutsevitch and Mary Alyokhina, staged an unhinged exhibition before the Altar of the Oath, right during a religious celebration. There was no musical accompaniment and video recordings were made with mobile phones. The music was added at a later time, before the video was published on YouTube.

Although Pussy Riot has stated that the action was just a political protest against the government of President Putin, a blatant and extreme protest, those present felt that the song, the words spoken against the Patriarch Kirill I and the general behavior of the young women constituted a grave offense to the religious sensibilities of the faithful and to the holy place that hosted them.

The Russian judiciary has moved on the basis of Article 213 Part II of the Russian Criminal Code: the penalty was equal to two years of imprisonment, the minimum required by applicable law, even if Pussy Riot were not new to performances of this manner.

In these two cases there have been invectives against Vladimir Putin, invectives that are the leitmotiv of this kind of show.

Many in the western world have deemed the ruling of the court excessive and there have been interventions in defense of the condemned by human rights organizations, politicians and many famous artists.

The pop star Madonna has seen fit to make a contribution and during her concert in Moscow she stepped on a crucifix and, needless to say, railed against President Putin. A member of the Ukrainian FEMEN women's group, known for provocative demonstrations generally in the name of nudity and invectives against Putin, on the other hand, cut a large wooden crucifix with a chainsaw, erected to commemorate the victims of Stalinism.

For Christians of all faiths, the crucifix is above all a symbol of life and hope: then, it does not make sense trample one and cutting another, thinking that it contributes to the cause of freedom. In the darker Middle Ages of the Inquisition, witch hunts and heretics, criticisms were leveled at the Church understood as an organization of temporal power, not the Evangelic message itself.

The writer is Italian and so it is natural to ask what would have happened if a protest in Italy had been staged as that of Pussy Riot in Moscow.

Italy is not uniform as to religious sensitivity but, on the contrary, varies depending on the regions. In general, however, is never taken lightly.

If three women, with their faces covered, had come to sing like mad near the main altar of the Cathedral of Milan, during an important celebration and at the same time had railed against the Prime Minister and against the Pope because the latter has approved some action or policies of the government... well, it's really hard to believe that those three women would have been praised as brave artists or champions of the freedom of expression. Police and the public would have been very severe against them, and so the attitude of the Catholic Church, which certainly would not like such intrusions in its places of worship.

If such an act was staged in Rome (one of whose churches, that of Velabro has been the subject of a mafia terroristic attack years ago) or in Naples, maybe in the Cathedral of San Gennaro which is the patron saint of the city, then the police most probably would have had to intervene to protect the "artists" in question, and the priests would have their work to contain the vehemence of the offended faithful.

In Sicily, more than a few Mafia bosses have been arrested with religious books and paintings of sacred subjects, usually about the Virgin Mary, to which some of them claim to be particularly devout.

Hard to believe that some mafia bosses would not feel their honor was offended and intervene to teach a lesson to such uninhibited artists or to their families, even though to an outside observer it is difficult to understand how to combine faith in God with the life of a ruthless criminal.

From a legal point of view, the Italian courts would act essentially on the basis of Article 405 of the Italian Penal Code which provides up to two years in prison for those who prevent or even disturb the function of any religion. This penalty increases to three years if acts of violence or threats are made to the people involved.

In the Italian system, there are also provisions on crimes of incitement to racial and religious hatred, both of which can be aggravating to crimes already committed.

In fact, to enter a church and stage an anti government musical bacchanal is an idea so absurd that nobody in Italy has ever had: such an eventuality would certainly come to to blows, at least at the beginning, and the so-called artists would then be treated the same as the people affected: Italy would not behave  any differently than Russia.

The Cathedral of Christ the Saviour in Moscow was built to commemorate the victory over Napoleon. Why should the Russian government, the Orthodox Church and Russian society tolerate masked people who enter into a sacred place, a particularly favorite one, to stage protests like a child, railing against the President and against the Patriarch of All Russia Orthodox Church? The foul language used by the so-called singers is already deplorable in a public place, why should it be accepted in a church?

In other words, why this hypocrisy towards Russia?

In fact, the hypocrisy is obvious even to western defenders of freedom, but deliberately ignored. To understand the reason for this behavior, it is necessary to have both an historical perspective and a knowledge of the facts about those much acclaimed recent "Color Revolutions."

The former national security adviser to President Carter, Zbigniew Brzezinski, has never hidden the fact that at least the weakening, if not the complete destruction, of the Soviet Union was mandatory for its separation from Ukraine. Which duly happened.

Madeleine Albright, former Secretary of State under President Clinton, extended the conviction of Brzezinski, formulating the concept that Russia was too big for the Russians (!). And that an objective, sparing no effort, should be to divide Russia into three parts (like Gaul by Caesar) and that it be reduced to the role of western protectorates. Implicit in the idea, these three parts should be divided by function for the mineral wealth and hydrocarbons.

Why wouldn't there be in Russia men and women who strongly oppose such a geopolitical project?  The explicit enunciation of "Urbi et Orbi" by those who have thought along those lines, denotes  minds prey to a delirium of omnipotence, separated from reality, with a lack of historical perspective, rather than intellects with political foresight.

It's an established opinion in many quarters that behind the so-called "Color Revolutions" there are ideas of political psychology, in some cases by the precise guidance of Gene Sharp, the ideologue of the political regime change, achieved through action passed off as non-violent, but whose genuine Gandhian non-violence is subject to legitimate questioning. It is worth noting that Mr. Sharp and his entourage are well placed at the U.S. State Department and the U.S. security services community.

Although there is a difference between a crowd and the people, the images of a multitude of people who protest can be conveniently made to appear as through they are an entire people who rebel: it is irrelevant whether the reasons for the protest are legitimate or not, as the type of government response is irrelevant.  In fact, if the current government yields to protests, requests will be increasingly exacerbated, and if it resists and ignores them, the Government will be accused of being authoritarian, dictatorial and brutal, as well as insensitive to the needs of their people.  That government will then be maligned by the western community of "freedom" which coincides in fact with the States who are members of NATO and its vassals.

Included in this method of political interference, even if not explicitly declared, are wild liberalizations, the destruction of the welfare state, the gradual reduction of working conditions to those of a serfdom if not to those of a real debt slavery: it is the same condition that more and more people living in the west experience every day, by the way.

The destruction of Yugoslavia first, and the ignoble war against Serbia after, have shown that they are always ready for an option of open warfare, if street protests driven by idiots are not enough. A war disguised as humanitarian intervention, of course. The destruction of Libya and the ongoing aggression against Syria are yet another confirmation.

Each and every country hosts disgruntled citizens that can be used by foreign powers, each State has immature but angry students that are rebelling against parental figures through the anti-government protests.

The story of Pussy Riot is part of this line of events.

The behavior demonstrated by these women, ably driven by forces outside of the Russian Federation, has resulted in an increasing of provocations as long as there was the inevitable reaction of the State and the injured parties.

As expected, this reaction has been declared undemocratic by countries that have laws similar to those of Russia or worse: once again, it is hard to imagine in a synagogue in New York or in an evangelical church in the American Midwest a scene like that seen in the Cathedral of Christ the Savior in Moscow. And it's hard to believe in the good manners of the American police, given the ease with which they can kill, remaining unpunished.

What is in danger in Russia is not freedom of speech or democracy, but the very existence of the Federation: the government of President Putin thus has a major task ahead. 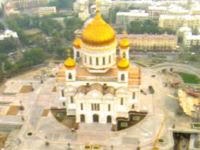