Bush and Blair should be tried for war crimes

by Paulo Nogueira
Any war is bad. Because you're there to kill other people.


Not exactly in these words, Tolstoy, in his epic War and Peace, about the clash between Russian and Napoleonic forces in early 1800, makes a superb defense of pacifism.

I have talked about some of the fundamental daily beliefs, such as freedom of expression and environmental commitment to future generations to save the planet from predation.

But today add pacifism to the list. As always, this belief appears personified in someone who symbolizes it. In this case, it is the South African Archbishop, Desmond Tutu.

Tutu, last week, made history once again. His spoken and written words threw a curveball to the moral world, with immediate international repercussions.

First, he refused to attend a seminar on leadership in Africa because he would be next to Tony Blair, the British prime minister who once allied himself immediately to George W. Bush to declare a war on untrue, sinister, lying premises when everything went wrong: the Iraq war.

Then, in an article in the Observer newspaper, Tutu was in front:  he championed the idea - most just - that Bush and Blair are accountable for their war crimes in an international court. Tutu noted the difference in treatment that western leaders and the "rest" receive after they initiate indefensible wars.

The Iraq War is exemplary in this regard. Bush and Blair justified it on the basis of information - contradicted by time and evidence - that Saddam Hussein had weapons of mass destruction and was ready to use them.

He did not. These weapons were never found, however much the pro-U.S. military forces sought to prove what they had affirmed. Thousands of Iraqi civilians - children, women, old men, innocent men - died as a result of this bloody lie. On the contrary to what Bush and Blair said, immediately  - we are not even talking of Iraqi Saddam loyalists - Iraqis took up arms against the invaders. (It fell to Wikileaks, the great video of the attack on innocents in the streets of Baghdad, Iraq to show the reality of what the western media did not see or did not want to see.)

The reaction of the British public to the Tutu proposal has been enthusiastic. One of the most recommended comments from readers of the Guardian on the Internet read: "I was having a shitty day until reading Tutu."  Another one recommended:  "The two - Bush and Blair - should go to court in chains while being kicked in the ass."  Another netizen pointed out that, "to obtain the approval of Parliament for the Iraq war in 2003, Blair said that Saddam's weapons of mass destruction would reach British soil in 45 minutes."

Blair, who after the Iraq War became a millionaire on the international speaker lecturing circuit, tried to defend himself. He said, for example, that infant mortality decreased after Saddam Hussein. What he did not say is that the biggest reason for the high infant mortality rate in Iraq was the indiscriminate boycotts that the United States and the United Kingdom led against Iraq.

In a preposterous decision, the government of Rio de Janeiro has hired Blair to be an expensive consultant to the 2016 Olympic Games. Blair has no experience of involvement in any such organizations, only when his government in London was chosen. The Brazilian media did not question it at any time that I recall.

Desmond Tutu opened the eyes of all of us twice this week.  Even better: he gave a moral slap to all of us. Just that some will not see the undeniable truth of his words that do not want to. 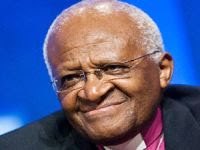