The United States wage the undeclared media war against Cuba non-stop. At every opportunity, an order comes from the think tank team in major Western agencies and the media begins to unfold the news spotted with the words "dissident", "opposition", "insurgent", "regime", "democratic forces", and the "international community." 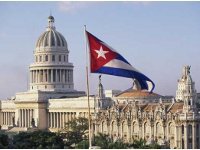 A clear example of this information war is a recently fabricated "desertion" to the U.S. of a daughter of the "architect" of Cuban reform and the tragic death in a car accident of the main "dissident" of the country. This war is a part of the ideological war launched by the intelligence of the U.S. and Europe through various NGOs and party structures in order to achieve the overthrow of the unwanted "regime of the Castro brothers." A few days ago in the Western mass media information emerged about the daughter of Raul Castro's likely successor, the deputy chairman of the Council of Ministers of Cuba, Marino Murillo, fleeing to the U.S.

The mouthpiece of the information war, a Spanish-language newspaper El Nuevo Herald, reported that they were not able to contact Glenda Murillo Diaz, but, according to her boyfriend, she is seeking asylum because she is "dissatisfied with the course of the Castro regime." The news was quickly replicated in the right context, including in the Russian media. Nobody even thought about the fact that the daughter of a state servant does not need to ask for political asylum as she can live abroad indefinitely and her freedom of movement and other freedoms are in no way limited, including in monetary terms.

Later, there was a single piece of news that the information about the fleeing from Cuba has not been confirmed by neither her relatives in Cuba nor the United States, but no one cared, because the goal was achieved - discredited member of the Political Bureau of the Communist Party of Cuba and the third person in the state.

Even more brazen campaign was launched in the western media upon a car accident resulting in the death of the "chief dissident", leader of the Christian Liberation Movement (MCL) Osvaldo Paya. The accidental death was turned into a doing of the "evil dictatorship" and "communist military junta" that organized the murder of "the most outstanding figures of the political opposition against the totalitarian regime." In an editorial the newspaper Granma stated that after July 22, the Western media published over 900 articles on the subject and there were about 120 thousand messages on social networks, where the tragedy was covered with similar vocabulary.

The witnesses who were in the car and survived were not cited. They were Karromero Angel, one of the leaders of the youth squad of Spanish Popular Party (PP), and Jens Modig Aron, president of the League of Young Christian Democrats in Sweden. They testified that the accident occurred as a result of speeding by Karromero who lost control and crashed into a tree.

Now let's see why these young people came to Cuba. The Spanish government of the former Prime Minister and leader of the PP Jose Maria Aznar was the "architect" of the so-called "European common position on Cuba", namely, the expansion of the economic embargo imposed by the United States over 50 years ago. As for Sweden, thanks the Minister for Foreign Affairs Carl Bildt, it has long established itself as the main agent of the CIA in Europe, and under a pretext of the struggle for human rights Sweden openly interfered in the internal affairs of the country and was openly rude.

Think back to a recent scandal in Belarus. These two young men have brought "donations" of those who finance subversive activities in Cuba to "peacefully" overthrow the legitimate government. Note that no one opposed their entry into the country, like no one prevented the spokesman of MCL, Regis Iglesias, from saying that Paya's death would be the grave of the "regime."

Now imagine that the accident occurred in Spain. The driver and his companion belonged to the Communist Party of Cuba and came to support separatist parties advocating the overthrow of the monarchy and the political system. Assume that these Cubans recruited followers in their field, providing them with financial support and technical advice to achieve their goals. What would they expect in Spain? The answer is obvious. They would be imprisoned for conspiracy, breach of sovereignty, immigration status, and perhaps even on terrorism charges.

Modig admitted at a press conference that during his first visit to Cuba in 2009 he met with a group of "counter-revolutionary journalists" and gave them money to buy equipment. This time, he was to give Paya 4,000 euro and accompany him on a trip to the island, all on a tourist visa. Modig naively said that he did not think that the action was illegal. The funny thing is, he also had no idea about the actions of the International Republican Institute (IRI) and the National Democratic Institute (NDI) that contribute to the overthrow of the political system in Cuba, whose representatives he met in Georgia.

And finally, here is an example of how "dissidents", the winners of the Sakharov Prize and the Nobel Peace Prize nominees, are nurtured. Here is a quote from an interview of the founder of the so-called independent journalist agency Nestor Bagher, who is also a Cuban state security agent named "Octavio":

"Osvaldo Paya is no more than a repentant church servant. Nobody in Cuba is interested in him. Sometimes he would come to my house," Hi, Bagher, give me an interview. "I knew him from around the block where we both lived. I saw him in pants with holes, and now he travels like a president, in a minibus. He claims to have received it from the church, but we all know that he bought it. I told him to his face that most of the "dissidents" are talking to each other that he paid for the signatures (for Varela petition - a document that demands "freedoms" form the government).

Moreover, I know of cases when the "dissidents" whose signatures were on the list did not give them because they could not stand Paya. Then there was the story of Maria Valdez Rosado (president of the Christian Democratic Party of Cuba - Ed.). They are cheating, even with each other, vying to become the president and get the pray, give scholarships, money, office, as it happens every day all around the world."