The founder of WikiLeaks, forced to hide from justice at the Embassy of Ecuador in London, does not feel slighted. The "Prisoner of Conscience" is giving speeches and preparing a telecast. Ecuador continues to stand for Assange, and the president broke out with an angry speech addressed to London. British lion roared, but was forced to retreat diplomatically. 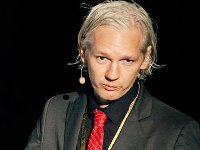 Last weekend, the international media had spread the news that the friction between the UK and Ecuador that sheltered Julian Assange in its Embassy in London was finally settled. The issue of an extradition of the notorious founder of WikiLeaks to Sweden is now to be solved by the diplomats. An official of the British Foreign Office assured the Government of Ecuador that the police would not resort to storming the Embassy to arrest Assange.

A few days earlier the British government decided to extradite the disgraced journalist under any circumstances. Formally, this question was not related to Wikileaks, because in Sweden Julian Assange is accused of sexual offenses. What has the infamous "fighter for justice" done to make Europe issue a warrant for his arrest? According to the official statements of the Swedish prosecutor's office, this is in regards to the complaints of Anna Ardin and Sofia Wilen, accusing Wikileaks founder of sexual harassment.However, in the legal case against Assange that has already been once dismissed for lack of evidence, there are still more questions than answers. The European champions are ready to condemn the morality of the disgraced journalist before court's ruling. The statement of offense so far looks very vague."

In Sweden, he is facing criminal prosecution for sexual offenses: two women accused him of having contact with them in Sweden last summer without using a condom," the website of the International French radio RFI referred to competent sources. Meanwhile, back in 2010 the media reported that a Swedish feminist Anna Ardin, accusing Assange of sex crimes, was flirting with the journalist in public, and later invited him to her home. This is not the first time when she resorted to far-fetched reasons to bring charges against men.

Interestingly, her friend, photographer Sofia Wilen, took the initiative and invited the Australian journalist to see a movie, and then to her house (this happened shortly after the first publication of the classified documents on WikiLeaks.) According to the defense of Julian Assange, the accusations of the woman may be backed by the United States, interested in the journalist's subsequent extradition for the exposure of the U.S. military in Iraq and Afghanistan.However, some of the UK national newspapers, such as the Gardian, last week opposed granting of political asylum to Assange who should be considered a criminal not eligible for a refugee status.

A diplomatic row between London and Quito that broke recently did not leave South America and the EU indifferent. Ecuador's president reacted angrily to the move of the English who brought police cordons to the consulate building and declared use of force, if necessary. The head of Ecuador said that his country was not a colony of England, and will not submit to pressure, and in the case of aggression will consider the incident a violation of the sovereignty of the country.

Most Latin American countries unanimously support Ecuador. Last Saturday the country's president, Rafael Correa, in a speech on state television said that he considered the unpleasant incident that arose because of the insistence of the British on the extradition of the founder of WikiLeaks, exhausted. "We offer the following options: either Assange is provided the ability to safely travel to our country from London, or Sweden has to provide assurance that he will not be extradited to a third country," said the president.

The British lion roared, but was forced to retreat diplomatically. For the English, a failed attempt to extradite the founder of WikiLeaks was a serious blow to the ego. However, London continues to exert psychological pressure on Assange, who is forced to be in a state of siege in the building of the Ecuadorian Embassy.

It is not clear what the outcome of a detective story with the extradition of the disgraced Australian journalist will be. The Ecuadorian authorities have agreed to extradite Assange only if his further extradition to the U.S. will not happen. According to the defense, the UK and Sweden will not agree to such terms. However, the transfer of Assange to Ecuador, where he is guaranteed political asylum, is unlikely: British police prepared to arrest the journalist immediately as soon as he leaves the consulate.

However, thanks to the high-speed Internet, Assange did not seem to feel imprisoned. While in the consulate, he has created a new program for a TV channel, spoke to his supporters in London with an appeal to stop the "witch hunt" and supported the French protesters of "The Left Front "in Grenoble. Analysts do not rule out that under the circumstances, the stay of the Australian journalist at the Embassy of Ecuador could drag on for months, if not years.