Obama one step away from attacking Syria

The U.S. president called the use or transportation of chemical weapons by Damascus the condition of military intervention in the Syrian crisis. Touching upon the American favorite topic of weapons of mass destruction, Obama seeks to score points in the presidential race. America's desire to fight in Syria is unlikely. If need be, it will be done by the regional allies. 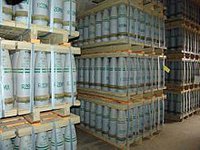 U.S. President Barack Obama said that until now, he did not give the command to start a military operation in Syria. He added that if the US starts receiving information on the transport or the use of large quantities of chemical weapons, it will change his decisions on Syria. He explained that in this case, the situation would be not merely an internal affair of Syria, but will affect the allies in the region, including Israel. He added that the US cannot allow a situation in which chemical weapons fall into the hands of the wrong people.

Obama's reference to the danger of weapons getting to the wrong people, that is, radicals and terrorists, is rather odd. The U.S. supports radicals and even terrorists politically, financially and technically. Washington simply found an excuse for a military intervention.

Security forces of both hostile and friendly countries knew about the presence of chemical weapons in Syria before, but the official confirmation was received from Damascus in mid-July of 2012. Syria's Foreign Ministry spokesman Jihad Makdisi said that his country might use chemical weapons in the event of invasion. He assured that it will never be used against civilians.

The aauthorities likely hoped to strengthen their position in a situation where the East and West every day discuss the possibility of external military intervention, but the opposite happened. Damascus dealt itself a major image blow. Even Russia and China rushed to persuade it not to use weapons of mass destruction (WMD) under any circumstances. Israelis started buying personal protection means in panic.

Provocative statements that the Assad regime was allegedly pulling WMD to the borders of the area of ​​Syrian hotspots are heard from the camp of the opposition. This was not true, but the nervousness about the topic was growing, because in a country with a civil war every day it gets more difficult for the authorities to ensure the safety of weapons and ensure that it does not get in the hands of the radicals. Another statement of the representative of the Syrian Ministry of Defense was concerning: he reported on the non-use of weapons against the civilian population. Today in Syria, those who are called peaceful citizens by the Syrian opposition are called terrorists mercenaries by the authorities. Did Maqdisi mean these people in his statement? Damascus understands that in the case of chemical weapons there will be a reason to force Syria to comply with the relevant international conventions. The Assad regime would like this the least.

Syria is not a signatory to the international Convention on the prohibition of chemical weapons, but is a party to the 1925 Geneva Protocol that prohibits the use of chemical and bacteriological methods of warfare. Damascus ratified the document in 1968, without conditions, except for the condition that the protocol does not constitute recognition of Israel. Under the protocol, Syria refused the first and resonse use of chemical or biological weapons against any state.

State Department spokesman Victoria Nuland suggested that the U.S. should act in Syria at its sole discretion, and not in accordance with the established rules of the international community. "At the moment we are quite skeptical about the prospects of achieving greater success in the Security Council, as previously its efforts were blocked by some permanent members," she said. "In view of this, we will work in accordance with the same agenda, to bring an end to the bloodshed in Syria and implement a political change with those countries that want to participate in it, and if necessary, outside the United Nations. "

Washington's position is more than clear. At the same time, it is unlikely that Washington is eager to fight. The U.S. is nearing presidential election, and the vote is scheduled for November 6, 2012. Republicans have criticized the Obama administration for indecisiveness. The Congress has repeatedly called to ship arms to the rebels. The Democrats argue that the situation is under control and study the appearance of the Syrian opposition. The administration does not have information about the readiness of Damascus to use chemical weapons. Yet, as the election approaches, the pressure is building up, especially given that WMD is one of the favorite topics of the Americans. Obama in this situation does not have too many options. The statement about the conditions for the start of a military intervention is one of them. This demonstrates his strong position. Yet, it is doubtful that Washington will launch a war on the eve of the elections. It is also doubtful that it would ever want to be at war in Syria, particularly when there are reliable allies in the region.

Moscow is trying to prevent the military option, urging the conflicting parties to engage in a dialogue on the basis of the Geneva accords. They suggest an immediate cessation of violence by both sides and the formation of a transitional government. Head of the Russian Defense Ministry Sergey Lavrov on Tuesday met with a delegation from the official Damascus. "We are committed to the Geneva accords that develop and detail the plan of Kofi Annan. We are convinced that this is the only way to ensure that the bloodshed stops as soon as possible, and more lives will be saved," he said.

Russia is pressuring Damascus, blaming it for a lack of measures to resolve the crisis, "Judging by what we are seeing in Syria, so far these steps have not been sufficient, but we are sure that there is no other way but to continue the line. A significant share of people is unhappy with their situation, and this is why national reconciliation is task number one. To do this, we need political will of the parties of the conflict," Lavrov said.

Head of the Syrian delegation, Vice-Premier Qadri Jamil, complained to head of the Russian diplomacy about the interference from outside: "We have many difficulties. First is the external interference in our affairs, which prevents resolution of problem by the Syrians. The government is working under the banner of national reconciliation. All parties must learn to compromise." It is not yet clear whether Jamil persuaded Lavrov. But it seems that the Russian diplomacy is aimed not for sympathy, but pressure.

Moscow encourages the West to use the same approach. According to Lavrov, the inability of the Western partners to agree on Syria is alarming. "We have an agreement on the Geneva document from the government of Syria. Our partners have not even tried to do anything like this, in fact, the main opposition group has publicly rejected the document. They have never even tried to work with them," he said to the press.

As for the Geneva accords, the opposition refused to accept it as the basis for settling the situation in Syria, despite the fact that the Geneva document was adopted by consensus. "This inability to agree is concerning," said the diplomat. It is quite obvious that the West has more leverage with the opposition - both foreign, living in Paris and Istanbul, and armed, supplied with all the necessities by the Gulf monarchies.