In the fight for the presidency of the United States no means are unacceptable, and the opponents of Obama seem to have chosen French fries as their weapon. Despite the advice of nutritionists, the Americans sincerely believe French fries to be their national meal. This belief is so strong that it is capable of influencing the ratings of the participants in the presidential race. 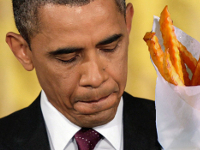 French fries are so important for the Americans that the exclusion of this meal from school lunches was discussed at the level of the Congress. "Let's be honest. We feed kids with overcooked fat," stated the outraged Democratic senators. In this fight with fried potatoes they were led by Barack Obama, who honestly tried to influence people by his example. He is in a good shape, not an ounce of excess weight, and has visible muscles - the president Americans should be proud of. Yet, they seem to be annoyed.

"Potato is also a vegetable. Why discriminate against it, preferring broccoli, spinach, green beans or carrots? Any vegetable can be fried in oil," the opponents objected to Obama. "As for vitamins, they are present in ketchup always served with French fries. Thanks to the ketchup, vitamins are present even in pizza." They are not original: in 1981, Ronald Reagan lobbied Congress demanding to recognize ketchup as a vegetable product. However, he was not successful.

The current potato battle is very similar. Concerns of the health of the nation that Obama is trying to show to the best of his presidential ability are faced with tough lobbying interests of the farmers, who are already affected by numerous turns of the financial crisis. The only question is what the electorate would choose - public health improvement or support for the agriculture. It seems that Obama has no hope as his fellow citizens are "addicted" to French fries.

The average American eats 53 pounds of potatoes a year - slightly more than two pounds a week, mostly fried or mashed. Not that much, at first sight. However, nutritionists blame the obesity epidemic sweeping the States on this product.

In 1946, when the school meals program was formed, children were in need of calories, and potatoes were cheap and nutritious - perfectly suitable for this purpose. But now even the military demand that the potatoes be removed from the barracks menu because recruits become so overweight that they cannot climb up to their bunk beds.

Baked potatoes, considered a more healthful option, quickly raise blood sugar levels, and instead of saturation only fuel the appetite. The American nation has been consuming potatoes from time immemorial, and it would have been fine if it had not been for the modern lack of exercise. Children, whose traditional diet includes cereal and fries and has a third more starch than adult food, suffer the most.

Are potatoes that delicious? "Of course," the officials convince the Americans, including this root crop in all food programs because of its cheapness. Five days a week, students eat potatoes for lunch, and this food habit remains for many years. The feeding continues, as food stamps for the poor buy primarily potatoes, as well as free lunches.

"Once potatoes were a symbol of the Americans' independence from England with its aristocrats with their table manners and sophisticated cooking," SPIEGEL wrote. Now that U.S. residents are at risk of losing their homes, jobs and superpower status, potatoes symbolize the good old America that provides utter support in the changing world of extremes. During the last decades, the rich have become richer, the poor - poorer, and only potatoes unite them. "

Since Obama decided to put people on a diet, in school lunches whole milk was replaced with fat-free and soda cups were made smaller. The President also demanded to restrict the content of starch in the weekly diet of students to 235 grams, which in practice means only one serving of pizza and French fries. Potato pancakes, potato chips and other snacks were removed from school meals. Experts from the president's team calculated that the cost of serving a school lunch will increase by only 14 cents, but the kids will grow up healthy. However, the initiative was not successful.

It is understandable why the Congress did not support Obama. He did not have much to show to the people: the 112th president in the U.S. history is one of the most unsuccessful ones. Last year, only 80 laws were made, which is fewer than ever in the last 65 years, although the need for reform is now very high, and the budget crisis has not been overcome. The military action in Libya, global climate change, immigration, tax policy, welfare reform - this is not a complete list of issues on which Congress has not been able to come to an agreement, bogged down in squabbles. Foreign analysts use these statistics to illustrate "the decline of the American democracy."

Now Obama has to pretend that this has been done by design, because some intermediate measures to improve the nation's health were taken. The projects that helped him to conquer the electorate fail one after another. The package of measures to stimulate the economy cost $787 billion, and made the situation worse. The Americans are totally unaccustomed to tightening their belts, because for many years after World War II they lived quite freely. Social assistance from the state is taken for granted, and demands grow in proportion as life gets worse. The idea to raise taxes was not entertained by the authorities because those who express it immediately become the enemy of the people. Obama paved his path into political hell with good intentions and is unlikely to return for the second term.