Australia gets ready for war against Asia

Employees of the Australian Strategic Policy Institute asked the authorities to increase defense spending. They fear the rapid growth of Asian countries, and even though Australia is now friendly with them, it is time to think about defense. What is happening in the world, if one of the most non-conflict countries in the Southern Hemisphere is preparing for war?

Not that long ago, Australian strategists announced the results of the studies of Asian region. Why would they care about Asia it would seem? The experts were afraid of the conclusions they made, and now suggest that the authorities reconsider the policy of financing the armed forces.

The intensive development of the Asian countries will inevitably lead to the emergence of geopolitical problems in whose solution the Australian army will have to participate, analysts say. Rod Lyons, a senior researcher, is confident that the state should allocate to the army at least two percent of GDP - and this is assuming that the relations with Asian countries remain peaceful and neighborly. If the situation is heated, the amount of funding should be increased to 2.5 percent of GDP. 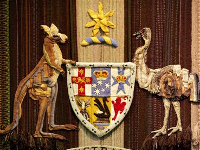 This is quite interesting. Australia, perhaps one of the most peaceful and non-conflict countries in the Southern Hemisphere, is seriously recommended to raise the defense and the strategic power of the state with reference to the political situation in the Asian region. As early as in 2013, the "White Book" will be signed - a response to the recommendation of the analysts that will subsequently be provided to the Australian defense department for review.

Where did this interest in Asia and the fear of it come from? After all, Washington sets the rules in the region. The United States began playing in the Asian field long time ago, each year increasing their presence - placed their bases, unleashed wars, exported minerals for nothing, including energy, and bought the mining industry facilities,.

But now, says Dr. Rod Lyon, the political environment in the region is changing, and the U.S. influence is significantly weakening. Japan and China that have been quite active in the economic sphere for now are ready to replace the U.S. Many experts argue that the Chinese army has long retrained from the defensive to the national liberation army. It can very well go and free less-developed Asian countries from the "yoke of capitalism."

Australia seems to not care about it. On the contrary, it is interested in the economic growth of Asia because it will form the basis for the development of a stable political situation in the region. But analysts do not recommend it to take other people's achievements lightly. Australians have to think about their own safety in the first place and maintain a certain level of defense. Meanwhile, the state budget is moving in the opposite direction - towards reduction on defense spending (it now accounts for 1.56 percent of GDP).

Australia finds itself between two fires: the last several decades it has been actively strengthening ties with the U.S., and recently started close and mutually beneficial cooperation with China, including through law enforcement agencies. But one cannot have their cake and eat it. In May of this year, Australia announced its intention to strengthen and develop relations with China, but at the same time it obviously is not going to part with the U.S. military located on its territory. Such a disposition, to put it mildly, is not welcomed by the Chinese who have already entered the world arena in the latent competition with the United States. Could Canberra get out of this situation by persuading the "sworn" friends to forget enmity for the sake of profit?

It will not be easy, because the two powers - the United States and China - are considering the economy to be a fuel tank of the political machine and at any time may do something unpredictable. So far Beijing, in contrast to Washington, does not fight on anyone's territory, and therefore is offering a "peaceful" deal to its Australian partners. But there is no guarantee that things will change very soon. Asia in general is a cat in a bag: a heterogeneous, problematic, politically and economically unstable, with a huge black market. The recent events in Kyrgyzstan are a vivid example of a surprise the Central Asian states are able to present to their allies.

Australia is the exact opposite. Unlike other states constantly shaken by wars - European and Asian countries - it has remained a sort of "oasis" and for the first time was under attack only in 1942-43. When Australia begins to think about improving its defense, it means things are not going well in the world. Analysts, of course, may be overly cautious and think of just emerging trends that require confirmation as a real threat. But when the threat does arise, it will be too late to allocate money for the army.