European Union to turn into United States of Europe?

When the EU was created, everyone thought that this structure could be destroyed by nothing and no one. But every day the talk of the end of the euro is heard increasingly more. The EU still cannot recover from the crisis. The economies of many EU countries are on the brink of default, and only the assistance of Germany so far delayed the end, but the Germans seem to have had enough of this situation. 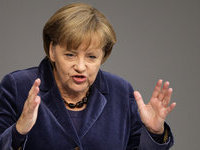 Every other citizen of Germany does not believe in the single European currency. The majority of Germans felt that their lives would improve dramatically if Germany leaves the euro area. These were the data of the poll by The Emnid, published on Sunday. 51 percent of the respondents voted for the abolition of the euro. In their view, Germany must have its own currency, and then their life would improve. Only 29 percent responded that if a country leaves the euro area the situation will worsen. In addition, 71 percent of the respondents want Greece to exit the euro area if the government of this country is not be able to implement austerity measures.

The rating agency Egan-Jones has not ruled out bankruptcy in Germany if the country continues to keep lending to its euro area partners. Head of the U.S. Agency Sean Egan said that it was clear to him that Germany would not be able to help the entire euro area without crossing the limits of its own credit. If Berlin does not put an end to the wishes of other states and increases their financial assistance it will slide down, he added.

Egan believes that the hypothetical failure of Germany is quite possible. He argues that Germany would have been better off if it were not for the single European currency, but a possible withdrawal from the Eurozone will cost even more. Moody's has revised its July 23 long-term credit rating outlook for Germany from "stable" to "negative", but the rating is maintained at the highest level - AAA. Late last month, Egan-Jones has lowered the credit rating of Germany from AA-to A +, citing the fact that withdrawal of any country from the EU will affect the economy of Germany, and it will suffer huge losses.

Today there is little doubt that Europe will soon face a profound economic shock that in its consequences may be the most terrible after World War II. Recently, a group of leading economic experts presented a number of recommendations that could help resolve the debt crisis.

Experts, including a member of the German Council of Experts on Economic Affairs, Peter Bofinger and president of the Institute of World Economy Dennis Snover, call on governments of the Eurozone countries to turn to more drastic action to save the European currency. They oppose the Eurobonds program (union bonds) or a transformation into a 'transfer' union, in which rich countries would support the poor ones for the sake of the common European currency. The government of Germany and the Germans have long been tired of the appeals from other European countries to help them financially.

The Commission of Experts offers alternative methods of resuscitation - in particular, institutional reforms. But most importantly, they believe that the elimination of the crisis has become urgent and a common cause of all the countries of the European Union. Experts believe that it is necessary in the short term to extend guarantees to countries in arrears if they implement the agreed reforms.

Meanwhile, the London-based private foundation of Charles Volfson held a competition to plan the destruction of the European Union. The winner Roger Bootle, a director of UK-based Capital Economics, received 250,000 pounds award for his work. He modeled a situation where one or several crisis-affected countries are leaving the euro zone. For example, Greece alone or together with Portugal and Spain. If secrecy is observed, with the timely closure of stock exchanges and banks, according to him, one can move quickly to the national currency that will subsequently devalue by 30-50 percent, but competitiveness will be restored. The British analyst (and he is not alone) believes that in any case, Germany, as the most powerful country in economic terms in the EU, will stand. But will it?

On July 23, Moody's lowered FRG's rating outlook to negative. It explained its decision by the increased uncertainty of the outcome of the crisis in the euro area, the probability of Greece withdrawing, the level of financial obligations that must be taken over the government, and the increased risks for German banks that are lenders to the "problematic" countries. Revelation of the agency coincided with the decline of the index of business confidence in Germany to a level lower than forecasted by economists.

However, it should be taken into account that the rating agencies are influenced by the Anglo-Saxon segment of the financial International allied with southern Europeans. As suggested, the representatives of the German camp will be able to reduce the fiscal risks only in the event of a carte blanche policy, taking responsibility for the eventual cessation of payments in the future and not expecting some response obligations. Simply put, the Southerners should be saved, and the Anglo-Saxons will gleefully rejoice if the Germans have a hard time doing it.

This scenario is advantageous for Barack Obama's election plans. He will be able to show some positive movement in the U.S. economy on the sad background of the "decline of Europe." Angela Merkel can be also satisfied with Moody's diagnosis. If Hollande, Rahoy and Monty request money at the next summit, Merkel will be able to present a forecast of the agency as an argument, saying that the loans are not limitless.

But the fact remains that the German economy is facing serious challenges, able to blow up the only island of stability in today's Europe. One of them is the problem of exports, because in terms of its volume Germany is second only to China. Berlin, realizing its own dependence on exports, is trying to diversify its foreign economic relations. If in 2007 the EU accounted for 43 percent of the German exports, then in 2011 - only 39. So far the revenue from exports to European countries is over a quarter of German GDP. Therefore, the deteriorating economic situation in the EU could deliver a strong blow to the state of affairs in Germany. Soon, German corporations may have no one to sell their products to.

In addition, 65 percent of foreign direct investment in Germany is in the EU countries. They have lost much in price, but they can depreciate even more if monetary union falls apart. Therefore, investments of German banks and financial groups can greatly depreciate. The dependence of the Bundesbank on the central banks of the European countries in the Eurozone should be taken into account as well. Now a "clean" debt of central banks to Bundesbank is over 700 billion dollars. In the case of a collapse of the euro area the Germans will get much less.

Thus, Berlin faced a very difficult choice. The logic of the latest developments within the European Union suggests that it is necessary to take risks and to save drowning "Southerners." Such altruism is not liked by the German corporations.

At the same time it is unlikely that Germany can sit the crisis out while providing "cosmetic" assistance to the outsiders in the Eurozone. The interdependence of the economies in Europe is too high, so the collapse of the South in any case will have a catastrophic effect on its north. A creation of something similar to the "United States of Europe", but under the auspices of Berlin, can be another way out. Otherwise, the German capital will not make sacrifices. After all, the Germans are tired of doing "charity work".