EU to abolish Schengen visas for Russia in 1.5 years? 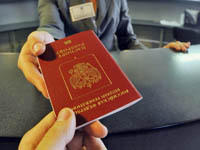 The stories about abolition of the visa regime between Russia and the European Union in the next few years have been discussed for ten years, but the state of affairs remains unchanged. However, recently - after negotiations with Eros-Marcoule Kozak - Russian Foreign Minister Sergei Lavrov said that the visa issue will be resolved within one and a half years.

"The issue should not take more than 18 months to resolve. So far this has not happened, and this year we want to agree on further measures to ease the visa regime by expanding the category of people who can get visas more easily and for longer periods," said Sergey Lavrov.

Both parties understand that the abolition of visas will be an excellent catalyst for the development of bilateral relations. Russia, of course, is interested in a quick result, because the Olympics of 2014 are nearing, and in anticipation it would be very appropriate to open the borders with the Schengen zone. The benefits are obvious - both the economic and political, but the EU does not want to rush and, given the high level of bureaucratization of the processes occurring in the EU, it is even impossible. The news of the forthcoming solution on the visa issue is regularly heard on the Russian side, while the EU provides meaningful and at the same time vague statements with no specific time frame.

Russia has been conducting negotiations on abolishing visas in the EU for ten years. Brussels has long been opposed to it, arguing risk factors of varying degrees of artificiality. Being fed up with the side effects of its migration policy, the EU was afraid of not sustaining the influx of "refugees" from the troubled countries of the CIS that have visa-free regime with Russia. And, of course, they actively mentioned the notorious "Russian mafia" waiting for the abolition of visas in order to rush to Europe and raise the level of crime it to catastrophic.

On the other hand, the removal of bureaucratic obstacles would increase the flow of tourists from Russia to the EU, which will potentially result in enormous profits. At a time when many EU members are stuck in the grip of the financial crisis, the search for new sources of income for them is very relevant.

In this context, Moscow has high hopes for Cyprus that will soon replace Denmark as the chairman of the Council of Europe that plays an important role in the political life of the EU. Earlier, Cyprus has advocated for the abolition of visa regime with Russia, which means that Russia can count on its support, albeit not without a healthy mercantile component.

For example, in October of last year Cypriot ambassador to Russia Kestoras said that the flow of tourists from Russia increased by 51 percent, and that the republic was an ardent supporter of abolishing the visa regime between Russia and the EU. Whether this statement is true will become clear in December of this year at the summit of the EU - Russia. The plan is to evaluate all the work conducted in the framework of implementation of the "Joint steps" involving the joint preparation for the introduction of visa-free regime.

So far, all motions from both sides were assessed as positive. Most importantly, it is an understanding that the visa regime slows down the development of bilateral cooperation. There is hope for a quick resolution of the issue. Recently, it has been discussed increasingly more at high level. Vladimir Putin after the last EU - Russia summit commended the work performed in this direction. But, as the head of state noted, Russia would need to introduce tighter control of migration processes, and perhaps, tightening of the procedures for obtaining citizenship.

European manufacturers also advocate for the abolition of visas between Russia and the EU. The European Parliament has received a petition signed by representatives of nine countries participating in the union requesting the abolition of the visa regime, not only with Russia but also with some CIS countries - in particular, Ukraine and Moldova. Trade associations of Czech Republic, Turkey, Germany, Finland, Italy, Denmark, Poland, Spain and France who sent a joint statement, hope for a quick solution to the issue. They have expressed a desire to begin similar negotiations with other partners in the EU - Georgia, Armenia, Azerbaijan and Kazakhstan.

For the Russian side, the abolition of visas, of course, will be a joyous event. For many crossing the border into Schengen will be many times faster and easier. Small and medium-sized businesses expect an increase in turnover. The implementation of business relationships and business contacts within the WTO framework that Russia has recently joined goes without saying.

In the meantime, the overcoming of visa obstacles requires time and money, which cannot but affect the volume of tourist flow and economic cooperation. "This is the money that goes nowhere and does not belong to either Russia or the EU. This money goes for salaries of the officials who deal with visa papers. For the businesses, especially small and medium-sized, on both sides of the border it has long been clear that a visa is a relic of the past tied to bureaucracy," said Georgiy Dykhanov, an expert in economics from Kaliningrad, head of the Consulting Center" Business Expert."