Responding to the threat of the Syrian leadership on using chemical weapons, President Obama implicitly acknowledged that a potential aggressor in this situation is his country - the United States. The Syrian government, despite the efforts of the West to overthrow it, has properly and promptly alerted the presumptuous westerners. Bashar al-Assad continues the struggle, and he is not alone.

The statement was made by the official representative of the Ministry of Foreign Affairs of Syria Jihad Maqdisi. He assured that all stocks of chemical weapons in Syria were under the control of the government forces, and Damascus would only use it in the case of external aggression. This statement was the first official confirmation of the fact that Syria has chemical weapons. There will be no sanctions because Damascus has not signed the convention banning chemical weapons. 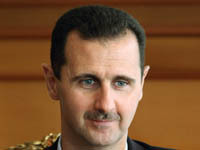 Maqdisi described the latest declaration of the Arab League that called for the resignation of Al-Assad as a "gross interference" in internal affairs of Syria. However, it would be extremely strange to expect anything else of LAS that became a vassal of NATO. The Syrian representative also reiterated his government's commitment to a peaceful plan of Kofi Annan that provides, among other things, for the beginning of a dialogue between the government and opposition. However, it is obvious that the plan is doomed to failure, although it will serve as a buffer against foreign intervention.

The plan ceased to be trustworthy after a traitor detonated a bomb in the building of the General Directorate of Security in Syria. A suicide bomber destroyed the military elite of the country killing the defense minister, interior minister and head of military intelligence. After that, it seemed, President Assad was doomed. The Western press wrote on front pages that he was wounded, his family fled to Moscow, and the Islamists were fighting in the streets of Damascus. However, we must pay tribute to the personal envoy of Russia in the UN Security Council, Vitaly Churkin. No one expected his tough speech on June 19 at a meeting of the UN Security Council for adopting another resolution condemning Syria.

"Instead of making rude insinuations against Russia's policy that throughout the conflict has not weakened the efforts for a political settlement and provided key support for the establishment of the mission, Kofi Annan, the Western Council members who spoke today with the unacceptable, unworthy statements, could at least do something in order to facilitate a dialogue between Syrian parties to prevent further militarization of the Syrian crisis, and stop inciting extremist activation, including terrorist groups," said Churkin.

"Setting of their own geopolitical goals that have nothing to do with the interests of the Syrian people by these Pharisees, in fact, provoked the escalation of the conflict that reached such tragic proportions," said the Russian official. The action plan of the Western intelligence agencies that planned to change the position of Russia and China on Syria through terrorist attacks and active fighting in Damascus has failed.

When Russia takes a tough and strong position, the West is heading. A resolution was adopted that condemned both sides of the conflict in Syria. On Monday, it became clear that the necessary support was good for Assad. He recovered from a deep knock-down. This is evidenced by the declaration he made on the use of chemical weapons.

"We are not Libya. You will break your teeth at us," said Assad. Now he has to put aside doubt and sweep tough urban neighborhoods, not only in Damascus, but also the cities that recently were occupied by the militants through the use of tanks and helicopters. It is time to restore the status quo and force them to sit down for talks by force rather than useless persuasion.

All the more so that it is a profanation by the West. Or rather, a direct support for the Islamists in the face of the Syrian National Council (SNC) and the so-called free Rebel Syrian army that has over 6,000 fighters of the international terrorist organization "Al Qaeda" in its ranks. The support is provided by financing and weapons smuggling via Turkey.

Interestingly, the U.S. President Barack Obama instantly responded to the threat of the Syrians. Speaking on Monday in Nevada, he said that given the reserves of chemical weapons in possession of the Syrian regime, he wanted Assad and his associates to know that the world was looking at them, and they would have to respond to the international community and the United States if they commit a tragic mistake using chemical weapons.

The Americans never hesitate to talk about what they want, but in this case it would have been better if it was done through diplomatic channels. Obama has indirectly confirmed with his words that his law enforcement agencies have a plan to attack Syria. The Europeans, incidentally, were smart enough to refrain from such statements for now.

The Russian president is not silent either. Vladimir Putin said yesterday that the removal of Syrian President Bashar al-Assad from power through unconstitutional means could lead to an endless civil war in the country. "We do not want the situation to develop according to the bloodiest civil war scenario that would last for who knows how many years, like in Afghanistan", said Russian President after a meeting with Italian Prime Minister Mario Monti.

According to Putin, Russia is interested in a timely resolution of the conflict peacefully. "[we want] all the people who live in this territory, in this country, all who are represented by small religious groups, and those who are in the majority, to agree with each other and find an acceptable to all way to control the participation in the government , providing safety of various ethnic groups in the future ", said Vladimir Putin.

Unfortunately, a few believe in this scenario, and probably the head of the Russian Federation is not one of them. The matter is not so much about Syria but, rather, Iran. The West has lost the "war for the minds" with Tehran. It is recognized by Western and American geopolitics working on the subject of the Middle East.

Iran's influence from Tehran to Baghdad and from Damascus to the Shiite south of Lebanon is an indisputable fact. This reality has to be reckoned with, but this is not a plausible solution, and a plan for the military doctrine of priority in the Middle East has already been laid out. But to implement it, it is necessary to destroy the allied chain. This is possible only at the cost of the destruction of Syria.