The FUKUS axis versus Syria and civilization

I can no longer tolerate getting these reports that people who previously lived in peace, tranquility and harmony now have to face terrorism, beheadings, kidnappings, mutilation and a myriad of other horrors.  And it seems odd, too, that all of this is happening in countries whose people previously gave refuge to other beleaguered, tortured, murdered peoples.

Throughout the continuing horror of terrorist attacks, the Syrian people have been amazing.  A source says that life is normal in Damascus, people are voluntarily joining in to clean up...adding that authorities, along with locals, are also chasing terrorists down in the streets.

They don't even know this stupid term FSA (Free Syrian Army), they merely refer to them as what they are: armed terrorists.  Refuse from God knows where...

When western diplomats engage in high-level meetings about international affairs, making irrational, unreasonable, pig-headed, intransigent demands, who are they representing?

Discussion at a recent conference revolved around the proposal by Kofi Annan to persuade Syrians to put together an all-inclusive government of 'national unity.'

The western FUKUS axis, however, insisted that officials of the Assad government should be kept out of any new Syrian government.  By what right do they take it upon themselves to circumvent the will of the Syrian people by demanding that their leader and his officials not be part of any "new" Syrian government?  It is for the people of Syria to determine, not some hot dogs in the west.

Clearly the west wishes to set up another farcical election like they did in Libya:  Choose Puppet No. 1 or Puppet No. 2.  Big choice, the Libyan Jamahiriya government was not allowed on that ballot either.

How ludicrous it is for the west to accuse Russia and China of being responsible for the continuing violence when they, the FUKUS axis, are the ones insisting only one side stop the violence (the one clearly and obviously not responsible for it) instead of both sides.

We have an opinion from Russian Middle East analyst Dr Vladimir Isayev:

"Annan's initiative is good, but lacks detail and clarity. Excluding the Assad side is bound to make things even worse. Including the opposition supposes clarity as to exactly which of the opposition factions are to be included. Giving a say to the radicals who wage a terror campaign is unlikely to be welcomed by the Syrian people."

The FUKUS axis, with the Gulf GCC (Gulf Cooperation Council), has been waging an intense media war against Syria.  Just like the weapons of mass destruction in Iraq, the babies thrown out of incubators...every single time a vote is coming up at the UN or a meeting is about to take place, predictably an incident is set in motion...a "massacre" perpetrated by the terrorists (as the government has done a sterling job of capturing them), while they attempt to blame the Syrian government for said massacres.

It has happened so many times in Syria, just like it did in Libya, that one knows before even examining the evidence that it's just another attempt to defame, slander and demonize the Syrian government and army, and as many Syrian citizens have told us, "This is impossible that our soldiers would do this.  How could that be because these men are our husbands, our brothers, our sons?"

How many countless instances were there, exactly the same, in Libya?  No one is fooling or putting one over on Russia and China again.

When the terrorists were moving chemical weapons recently, an alert was put out in anticipation that once again, they would try to blame the army and the government, as though the government and army are fond of slicing off their own noses.  "Sure, a meeting is happening tomorrow, let's make ourselves look like savages!"

The latest tactics also involve inflated reports of their proxies' success, as well as trying to distort Russia's position about Assad remaining as leader of Syria.  A French news outlet falsely reported that the Russian ambassador had indicated that Russia was willing to concede that Assad should leave, but the lie was later totally exposed.  Additionally, in the past 17 months, Assad supposedly fled ten times, the Syrian army collapsed 1,000 times and over two million soldiers re-defected.

Plans are underway to construct false scenarios where a government collapse and mass defections will be played out, just like a bad soap opera.  Never do they report the successful operations against the terrorists, but they try to create the impression that the terrorists are quickly taking over large areas of the country, which is completely false.  The opposite is true.  The vermin is being liquidated, the areas are being sterilized of the invading, foreign supplied, funded and salaried filth.

There is photographic evidence taken from a house in Turkey where the FSA is holed up, that much of their sophisticated communication equipment comes directly from the USA.  Now what was that about accusations that Russia and China are responsible for allowing the violence to continue when they are providing communication equipment so that terrorists can coordinate attacks?  Eh, stupid big mouths, Clinton and Rice?

If the lies and false accusations were not bad enough, we have the so-called exponents of "freedom and democracy" vigorously attempting to shut down the voice of the other side.  They are trying to perpetrate a Libya style blackout on all Syrian state media.

Nothing like freedom of speech and freedom of the press, bombed, squashed and destroyed in the name of freedom and democracy.  A favorite target of these terrorists happens to be Syrian media.

The terrorist proxies and their masters are doing everything to prevent the world community from seeing the Syrian side of the story via government-backed satellite channels.  This site has already given the details.  See, Syria: The cemetery of western credibility.

We have seen countless attacks against independent media reporting the truth about the situation in Syria.  The SANA website had been blocked in some western countries until alternatives were set up.   Al Manar, Al Alam and NBN TV will carry the broadcast of the Syrian Satellite Channel if the broadcast is cut in the coming hours.

Just a note to those clowns:  Hollywood props depicting scenes in Syria will not work to destroy the morale or the resistance of the Syrian people.  Neither will reporting fake defections, as in the case of Manaf Tlass.

Four members of the Syrian government were just recently assassinated in a terrorist attack, but western officials and media celebrated as though it was a victory, instead of the tremendous tragedy it was to those they served, those who loved them and those who love true freedom and fight against fascism and imperialism.  The Syrian people should be sent condolences, not more terrorist filth, not more threats about no-fly zones or sanctions.

Truly we live in terrible times, times of great evil and deception.  This is a crisis of civilization.  We don't need nuclear weapons to destroy civilization.  Not just these small, helpless countries are being attacked, assaulted and subjugated, but civilization itself is being attacked and lawlessness is taking over.  Civilization may not survive the 21st Century with these flagrant transgressions against international law being maintained by the barrels of guns and bomb bay doors.

It's really up to us, the citizens of the world, who know the truth.   This isn't just about Assad, it never was. This is about the sanctity of Syria, the right of self determination, the right of people to control their own destiny and resources, the continued existence of international laws that were created by mankind throughout the horrors that beset generations in the attempt to make this a better world.

We must have a world that is safe for life, safe for human dignity, where we share this globe, this little insignificant planet,  during the brief flash that is Life...a holy moment in time in the infinite abyss.  People's worth as human beings must not be determined by how much money they do or do not have, but by their character and dedication to truth and humanity.

These terrorists and those who support them do not understand.  They are only capable of greed and all the vices that are born from it, the worst being the bearing of false witness, which is, in reality, the same as murder. 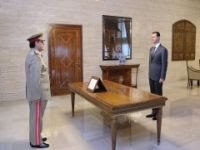