Chinese leader Mao Zedong not only built a strong country but also outlined a global goal: "We must conquer the globe where we will create a powerful state." Today, China has territorial claims to all its neighbors. Naturally, the U.S. is dreaming of becoming a mediator in resolving disputes in the region. But it seems that Beijing absolutely does not care about their opinion. 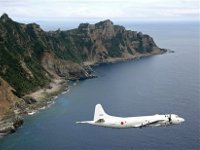 Burma, Laos, Northern India, Vietnam, Nepal, Bhutan, Thailand, Malaysia, Singapore, the Ryukyu Islands, 300 islands of the South China, East China and Yellow Seas, as well as Kyrgyzstan, Mongolia, Taiwan, South Kazakhstan, the Afghan province of Bahdashan, Transbaikalia and the Far East to South Okhotsk - here is the complete list of areas that, according to Zedong, were lost due to the fall of the Qing empire. All of these countries and regions combined exceed the territory of modern China. Not all complaints are voiced by the Government of China in the international arena, but within the country the imperialist ambitions have not been lost, but rather, are actively promoted.

The PRC authorities talk out loud only about the areas that, at least theoretically, can be taken away from Japan and Korea. Tokyo is regularly frustrated not only because of the travel of the Russian leaders to the Kuril Islands, but also about the Chinese ships freely entering the disputed Senkaku Islands waters. Beijing believes that the Islands are called Diaoyu, and they belonged to China, but the malicious Japanese tricked the U.S. into giving them to Japan because after World War II the uninhabited archipelago was in the US jurisdiction.

Significant reserves of natural gas were found on the islands. For the growing industry of China and stagnant Japan it is more than a serious argument in favor of the struggle for the archipelago, no matter what it is called. Not to mention the fish that is found there in large quantities. To date, the only agreement the parties have reached in the negotiations is on the joint development of oil fields. In addition, if the Japanese behave more or less decently, the Chinese are regularly caught for illegal fishing in the area.

Any territorial dispute, but rather, its resolution, is a serious precedent. If China's claim in respect of at least one territory from the list of the "lost" is satisfied, the Chinese machine would be unstoppable. Despite the fact that the Chinese are very pleased to partner with Russia and have always supported Russia in the UN Security Council, in person, on the sidelines, its diplomats supposedly jokingly hint to their Russian colleagues: you must understand that soon you will have to share the Far East? China has more than a billion people, while Russia's vast territory barely has 150 million.

These dangerous trends - demographic, and as a result, geopolitical - must sound scary to the Russian government, but so far it seems that it is happy with the fact that Beijing makes territorial claims only to Seoul and Tokyo. In 2005 Russia had already given China a bounty in the form of 337 square kilometers of land in the area of ​​Big Island (upper Argun River in the Chita region) and two sites in the vicinity of the islands Tarabarov and Big Ussuri near the confluence of the Amur and Ussuri.

However, none of the leaders of the military departments of ASEAN that includes all debating countries agree to recognize, for example, the fact that Diaoyu belongs to Japan. Instead, the defense ministers of Vietnam, Indonesia, Australia, Thailand and Singapore urged the Japanese authorities to proceed with caution and within the framework of the international law. These countries certainly do not need a resolution to the dispute because in that case their territory will be separated from China only by perseverance of the latter.

They are silent about the "Iodo island" (the Chinese version is Suenchzhao. - Ed) in the East China Sea. The sneaky Chinese took the principle of dividing the Arctic as an example and now claim that the underwater ridge of this tiny piece of land is under close control of the Chinese. Since the Iodo is closer to Korea, in 2003 the Koreans built an uninhabitable marine research station there. From the standpoint of the international law, this rock in general should not be the subject of a debate.

In any case, the controversy continues, Japan and South Korea remain to be supported by their all-time ally - the United States. For the US, the unification of Southeast Asian Nations is a chance to save their own economy, because in that case the World Trade Center will move there, where currently there are no transnational corporations in the amount sufficient for the U.S.

The success of the White House in the region does not depend on the strength that America loves to show any chance it has, but rather, diplomacy, as the countries of ASEAN and Asia-Pacific region do not trust each other or anyone outside the regional boundaries. However, Washington is trusted here because of the support of Seoul and Tokyo. However, China has already pushed Japan out of the ranks of the largest economies in the world, and the structure of the region is no longer formed on spatial basis.

Therefore, territorial claims of China, and not Russia, India or, for example, Australia are so important for Washington. Beijing is the only capital of the world, ready to use force in the struggle for the sake of expansion. During the last ten years, while America was blowing up its financial bubble, China has not only developed the industry, but also equipped its area of ​​interest with military equipment. China has placed 38 new diesel and nuclear submarines in the region, purchased four destroyers of class "Modern" from Russia and built another dozen on its own, and has launched a network of ground-based ballistic missiles to destroy naval targets.

Only one other country has done this before - the Soviet Union during the "Cold War". It is no wonder that the Americans are very concerned with the regular quarrels between China and its major allies. Construction of a naval base on Hainan Island does not add confidence to the U.S. The proximity to the Malacca Strait poses a threat to the smooth supply of Washington's main allies in the region - Japan, South Korea and Taiwan - this is the way the US sees the situation. The American senators have already decided that such behavior is a threat to Beijing's regional peace and stability, economic development and even "food security". The international community is well aware what usually follows such wording.