Media Minefields and the Fog of War 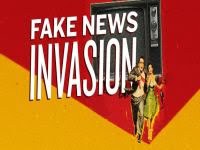 "Creativity is the lifeblood of our organisation." (BBC Mission statement)

As the sabre rattling towards Iran and the ongoing tragedy in Syria become increasingly hard to unravel, media errors or perhaps even obfuscation create their own navigational complexities.

One example: on Sunday, the 1st of July, BBC news programmes repeatedly stated that Syrian troops had fired at mourners at a funeral in or near Damascus (i.) Para 4:

"Meanwhile, activists said a funeral procession in a suburb of Damascus came under mortar attack and 30 people died.  The UK-based Syrian Observatory for Human Rights released amateur video footage claiming to show the explosion in Zamalka, a town 10 kilometers (six miles) east of the Syrian capital.  There has been no independent confirmation of the incident."

However the Los Angeles Times had an entirely different take (ii.).  A car bomb, not Syrian troops, had killed up to eighty-five mourners or members of the public:

"The car bomb went off as the procession passed a mosque. Hazy video clouded by dust in the first moments after the explosion showed dozens of mangled bodies lying on the road and the stretcher carrying Halabi's body on the ground nearby. 'I can't describe my feelings, because I am still numb right now given what I saw today,' said Abu Omar, whose cousin was killed and father and uncle injured.  No one can withstand what we saw' ..."

Whilst, clearly in shock,  not citing facts, the witness also blamed the government. However, at least he had a name, there was a first hand description of events and the graphic picture shows this was no random shooting.

The BBC seems to rely near entirely, as above, on un-named "activists say" sources - or the "Syrian Observatory for Human Rights," allegedly a one man satellite dish fitter from Coventry, in England's West Midlands.

Given the shocking recent picture of victims of a "massacre in Syria," shown by the BBC and (iii) presumably from their own archives, it turned out to be a massacre where responsibility lay far closer to home - one resultant from the illegal US-UK invasion of Iraq in 2003 - the BBC's score card for accurate reporting surely currently reads: "Must do better."

These are two incidents of many, leaving an impression of leading and biased coverage. The impression is often of the BBC more as cheer leader for a new invasion rather than an impartial news gathering organisation.

Many scholarly articles have been written comparing the complexities in Syria with the Balkans conflict of the 1990s (eg: iv) including foreign interference and funding - and media bias.

After the NATO assault on the Balkans, the BBC's defense correspondent of eleven years, Mark Laity, who had covered the conflict, joined NATO at their Brussels headquarters as deputy to their chief spokesman, Jamie Shea. (v)

The BBC receives a large amount of funding from the British Foreign and Commonwealth Office, supposedly the diplomatic arm of the government whose Foreign Secretaries, of whichever political persuasion, have long favoured "war, war", over "jaw, jaw" to misquote another war monger.

UK Foreign Secretary, William Hague, has missed no opportunity to join US Secretary of State Hillary Clinton in declaring that the sovereign government of President Assad of Syria: " ... must go," and indeed advocating Britain's funding of the insurgents.

Interesting to note is that the BBC also applied for funding from the US State Department, in a deal to combat censorship. "The funding is also expected to be used to educate people in countries with state censorship on how to circumnavigate the blocking of internet and TV services."

"Governments who have an interest in denying people information particularly at times of tension and upheaval are keen to do this and it is a particular problem now," said  BBC Controller of Business and Strategy, Jim Egan..(viii)

The deal was expected to be formally announced on International Press Freedom Day, on the 3rd of May. Seemingly, though, funding the British state broadcaster met with some hostility in the US, and the arrangement currently seems to have foundered. It has certainly gone very quiet. (ix)

Ironically on the 30th of June, Russian Foreign Minister Sergei Lavrov's criticisms  from the Geneva summit about the Western media's news coverage of the situation in Syria, allegedly led the BBC to interrupt his speech with a weather forecast.

"Lavrov's press conference at the Geneva meeting on Saturday, June 30, provided another chance for the BBC to show its bias against the Syrian government," stated Press TV, the media outlet of one of the countries the  State Department funding was meant to "liberate" from censorship - Iran. (x.)