Nagorno Karabakh may plunge into another murderous war

The sound of shooting rifles can still be heard on the border between Armenia and Azerbaijan. The current escalation of violence started when a group of saboteurs from Azerbaijan entered the territory of Nagorno-Karabakh controlled by the armed forces of Armenia. According to news reports from Armenian agencies, there were casualties among the civil population. 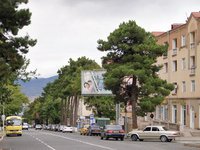 Russia, the USA and France unite their efforts not to let the border conflicts between Yerevan and Baku evolve into a large-scale armed conflict. The Nagorno-Karabakh issue was discussed in Mexico, within the scope of the G20 summit. On June 19, Vladimir Putin, Barack Obama and Francois Holland expressed their concerns in connection with the absence of progress in the bilateral talks between Armenia and Azerbaijan.

"We, the Presidents of the OSCE Minsk Group Co-Chair countries - France, the Russian Federation, and the United States of America - are united in our resolute commitment to a peaceful settlement of the Nagorno Karabakh conflict. The parties to the conflict should not further delay making the important decisions necessary to reach a lasting and peaceful settlement. We regret that the Presidents of Azerbaijan and Armenia did not take the decisive steps that our countries called for in the joint statement at Deauville on May 26, 2011. Nevertheless, the progress that has been achieved should provide the momentum to complete work on the framework for a comprehensive peace," news agencies quoted the joint statement approved by the presidents of the above-mentioned countries.

The truce between the feuding side was established in May 1994, when the murderous war in Nagorno Karabakh was over as a result of direct trilateral talks between Armenia, Azerbaijan and Nagorno Karabakh.

Nowadays, neither party claims responsibility for the border incidents. The local media have launched a true information war; there are human losses on both sides. Armenia and Azerbaijan constantly accuse each other of subversive activities and systematic violations of ceasefire.

According to Armenia, a group of Azeri saboteurs tried to penetrate into the positions of the Armenian army in Tavushskaya district early in the morning of June 5th. The attempt was foiled. Armenia lost three soldiers in the skirmish with the enemy.

The picture of the day is absolutely different when told by the Defense Ministry of Azerbaijan. An Armenian subversive group came close to army positions in the village of Agashagy Askipara, the Gazakhsky district. Four soldiers were killed, holding off the sudden attack of the saboteurs. In addition, the Armenian soldiers fired from the heights of the Gazakhsky district on the positions of Azerbaijani Armed Forces.

In the following days, the cannonade on the entire length of the line of control continued. On June 7, local media reprinted an interview with Armenian President Serzh Sargsyan, who accused his neighbor of provoking the conflict. "I've always said that provocations on the contact line are extremely dangerous. I also said that they would receive tough response. The incidents of recent days serve as evidence of this," News.am quoted Sargsyan as saying.

The tough rhetoric from the president of Armenia caused unconcealed irritation in Baku. The Azerbaijani press accused Sargsyan of fomenting war hysteria. The situation in the region stabilized to a certain extent by June 19th. The regular monitoring of the contact line between NK and Azerbaijan took place without incident. OSCE observers found no violations.

Although formally Baku and Yerevan continue to adhere to the peace plan proposed by Russia and European mediators, the likelihood of the gradual slide into a long military conflict in Nagorno-Karabakh is still quite large. Armenia won the war of 1988-1994, and the country does not hide its concerns about the growing military power of Azerbaijan. The official position of Baku is known very well. The country's leadership considers the ongoing occupation of Azerbaijani lands by Armenia absolutely unacceptable. Azeri officials claim that Armenia seized those lands during the combat action in the spring of 1994.

The leadership of Nagorno Karabakh Republic believes that no solution to the conflict is possible without the participation of Karabakh. Azerbaijan does not want to see the obvious and still considers Armenia the only party to the conflict, even though there were three parties participating in the talks of the Minsk Group of the OSCE. One has to admit that those negotiations were far more productive than the current bilateral meetings between the leaders of Armenia and Azerbaijan.

Earlier this year, President Ilham Aliyev released another portion of loud statements on Nagorno Karabakh. The President of Azerbaijan said that a military solution to the conflict could not be excluded if the talks failed. After the start of the June clashes, experts did not rush to predict a major war in the region. They prefer to speak of a slight increase of the risk for combat actions to resume.

Alexander Krylov, a senior researcher at the Institute of World Economy and International Relations told Pravda.Ru: "No one is interested in  Azerbaijan's new aggression against Nagorno-Karabakh today, including Aliyev himself. Of course, this may be propaganda, it can be a method of political pressure on the Armenian side, it may also be a cause for illusions for Azerbaijan, according to which Armenia may suddenly get frightened and compromise on something, but nothing more. Ilham Aliyev is not going to go to a serious war - never," the expert said.

The head of Center for Globalization and Regional Development, Stepan Grigoryan, said in an interview with Armenia Today news agency that while the probability of a military scenario is relatively low because of the position of the international community that takes great efforts to preserve peace in Nagorno Karabakh.

However, any diversion and shootouts, accompanied with human losses, may provoke a much larger war, including a full-scale war. For example, if a month ago the possibility of military operations was estimated at three percent, then the index increased to 15 percent after the recent events. This does not mean that the war will surely happen, it means that the probability has increased, said the expert.