In Cairo, a social typhoon was raised once again. In just one day before the presidential elections in Egypt the parliament was dissolved that did not stay even for five months, and the military once again took the power in their hands. According to a tradition originated in the days of the Egyptian revolution in 2011, the center of popular unrest was Tahrir Square. 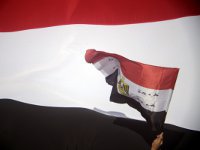 Two crucial decisions of the country's Constitutional Court liberally splashed some oil into the fire of the tumultuous presidential race. Cairo was plunged in unrest all night. Now there is no parliament, or rather, no lower house in Egypt as the Constitutional Court dismissed it.

According to the Egyptian media, nearly a third of the deputies to the National Assembly were there illegally. They ran as not associated with any party, but in reality were party members, which is strictly forbidden, as because of such "shadow agents' parliamentary factions actually increase their influence.

The second decision of the Constitutional Court that rocked Egypt was the abolition of the so-called "law of the political isolation." This is one of the scandalous conquests of the revolution that prohibits running for president for those who held high posts under President Mubarak.

This law effectively knocked out of the race one of the major presidential candidates, former Prime Minister Ahmed Shafiq. Now the situation is reversed, and he will participate in the elections quite legally, with a good chance of winning.

Another presidential candidate, Islamist Mohamed Mursi who overran Shafiq in the first round by only one percent, is dissatisfied with the decision of the court. It turns out that he was left without parliamentary support, where "Muslim Brotherhood" had the majority, and went one on one with Ahmed Shafiq.

Mursi considers himself a mirror of the Egyptian revolution. However, a significant portion of those who took to the streets of Egypt these days did not see much difference between Mursi and Shafiq. People believe that the results of the popular uprising last year have simply been stolen from them.

Let's think back to the Egyptian revolution that was the biggest even in the history of the country.

In fact, the revolution in Egypt was a series of street demonstrations and protests from January 25 to February 11, 2011, which led to the resignation of the government first, and then President Hosni Mubarak, who was in power since 1981, that is, at that time exactly 30 years.

However, the country was "shaking" in November of 2011 as it is now, but the events of those days were the most revealing. The events unfolded in Cairo, Alexandria and other cities, including foreign capitals around the embassies of Egypt.

In addition to the president's resignation, the protesters demanded the abolition of the state of emergency, combatting unemployment, an increase of the minimum wage, solving the issue of lack of housing, high food prices, lack of freedom of speech and poor living conditions.

According to some experts and journalists, the main causes of the unrest in Egypt are: 30-year stretch in power of one clan, and as a consequence, the inability of the opposition clans (and there are quite a few in the country) to realize their ambitions; unemployment, lack of social protection of the poor population, as well as some structural and demographic factors.

Many analysts believe that the protests were spurred by the revolution in Tunisia that triggered a domino effect. To maintain control over the country, the authorities arrested opposition leaders (both liberals and Islamists).

To prevent the coordination of the situation in blogs the Internet was off in the country, as well as (temporarily) mobile communications. The government was forced to resign and new appointments were made. In large cities, a curfew was declared and the army was deployed to establish control over the strategic targets. However, they remained neutral and did not interfere with the events. Finally, on February 11 of 2011 Mubarak hated across the country has resigned.

The authorities in Egypt turned to the Supreme Council of the Armed Forces led by General Tantawi. The military suspended the constitution and dissolved the parliament.

Now, something very similar is going on.