The U.S. is building "the most advanced" warship in history - DDG-1000 destroyer of Zumwalt class that the Pentagon called a "super-stealth silver bullet." It will be able to move quietly along the coast, including in the shallows, hitting the targets of the enemy with electromagnetic rail guns, deceiving enemy radars.

Americans plan to equip its fleet in the Asia-Pacific region with these ships "from sci-fi movies". It is to the shores of China frightening with the increase of its military where the Pentagon intends to relocate 60% of its ships in 2020 in the framework of the renewed military strategy.

The new destroyers are being built in Maine, the first will be launched as early as 2014, the Associated Press reported. Visiting the local shipyard in April, the head of Naval Operations Adm. Jonathan Grinert praised the ships, saying that they would be the hope in the future. He listed the main advantages: "invisibility", an advanced sonar system, the incredible striking power and small crew size.
Pentagon chief Leon Panetta, announcing at a regional security conference in Singapore the change to the U.S. military strategy, said that the new high-tech vessel will be a significant part of the U.S. Pacific grouping.

The stealth destroyers could be useful in other regions, such as the Persian Gulf, but the military believe that they will be most beneficial in Asia. The new ships will be able to perform the mission both in the high seas and near the coast. In Asia there are a great number of island States, and China has a long coastline in the Pacific. 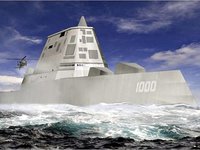 Washington is worried that China is actively modernizing its fleet. In particular, the country is working on reliable aircraft carriers, as well as rockets and submarines, because of which the American vessels may be denied access to the strategic sea lanes near the Chinese territory. The United States believes that Beijing intends to prevent the Americans from interfering in the conflict over the disputed territory in the South China Sea or interaction with Taiwan that China considers its own.

Now the U.S. has a great advantage at the high seas, but China by modernizing its fleet is getting an advantage in shallower, coastal waters. The new American stealth destroyers are designed to cope with this problem.

The Chinese ridiculed the American novelty, and critics reminded the U.S. Pentagon of another "super-stealth" project.

However, the Chinese military are not afraid of the science fiction "silver bullets". Officially they did not comment on the U.S. plans. But one of the admirals appeared on local television with an openly mocking commentary. He said that all the talk about the invincibility of the new destroyers is no more than the advertising hype, but really any "high tech" ship of the United States can be easily sunk by a simple fishing boat loaded with explosives.

In the U.S., too, there are enough critics and skeptics, even though they are mostly afraid of the size of budget spending. The construction of one DDG-1000 costs about $3.1 billion - nearly twice the cost of the existing destroyers. If we add the costs of research and development, the price of one destroyer increases to seven billion dollars.

Critics believe that this Pentagon's project is sucking money from the Treasury, while it would be better to spend it on the support of the regular navy. Many security experts have questioned whether the developers are too fixated on the semi-fantastic "technology of the future."

They recall the story of the troubled fighter, fifth-generation stealth F-22 Raptor. It was touted as the most advanced fighter ever built, but, as recently revealed, it is almost dangerous to the pilots. But even earlier these fighters were dropped because of exorbitant price. A successor to the F-22 fighter, jet F-35, was the most expensive project in the history of the Pentagon.

The Navy says that the cost of a destroyer will pay off. They are convinced that the technology incorporated in the new stealth vessel will meet the most current requirements, and in the next decade will be gradually introduced on other vessels.

DDG-1000 destroyers and other stealth vessels of class Zumwalt have the body that leaves almost no trace, they are equipped with an electric motor and the most advanced sonar devices and missiles. These ships are longer and heavier than the current destroyers, but the automated systems installed on them will reduce the crew size by half. In addition, the enemy radar will "see" not a warship, but a boat a little bigger than a small fishing boat.

The destroyers will be equipped with an electromagnetic rail gun that with the help of a magnetic field and electric current will run projectiles at speeds several times faster than the speed of sound.

However, despite these fabulous features, the new destroyer was virtually "drowned" in Congress. Initially the Navy ordered 32 of these vessels, but the number was reduced to 24 and then to seven. Now only three ships are being built.

The costs were rising, so it is no surprise that the project "collapsed," said a security expert at the Technological University of Singapore Richard Bitsinger. "As an idea, DDG-1000 is good, but it was decided to implement too much technology into it that has not yet proven its efficiency," he explains.