Netherlands adds more fuel to the fire of European crisis

The Prime Minister of the Netherlands, Mark Rutte, has submitted his letter of resignation to Queen Beatrix after entering into a governmental coalition with the extreme right-wing Freedom Party, led by Geert Wilders, which had refused to support the budget reduction. His resignation was immediately accepted. 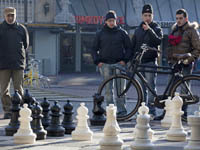 The Netherlands, is one of many European countries which still supports the "AAA" credit rating. The governmental crisis has shown the need for urgent parliamentary elections and the subsequent destabilisation of a country which, until now, had been the most stable after Germany and France's economies in the Eurozone. Inevitable changes lie in wait in the Euro zone.

Rutte (from the Liberal Party) created the government in October 2012 in a coalition with the Freedom Party (which had been in parliament for 24 months) and the Christian-Democrats Party (CDP). Known in Europe as a man of morals on economic budget issues, he conducted negotiations over the course of six weeks, but did not manage to convince the Euro-skeptic Wilders, on whose support he had become dependent after the last elections. Rutte positioned himself as a decisive economist and had promised to created 400,000 new jobs.

However, unemployment continued to grow and consumer demand started to fall. The number of unsold homes reached the same levels of Southern Europe. The Dutch newspaper "De Volkskrant" claims that "the housing market has gone into a coma", the quantity of planning permissions reaching the lowest levels since 1953. The debt of private borrowers to banks was the highest in the Eurozone. In 2010, according to data from Eurostat, GNP was at 246%, in comparison to 202% in Ireland, 149% in the UK, 124% in Spain, and 90% in France and Germany.

The country's government debt made up "only" 65% of the GNP, in comparison to 120% in Italy and 95% in Portugal, however the profitability on medium-term state bonds for the last 3 years has grown and today, according to the agency "Rater" is at 7.9%, which is the predecessor of catastrophic ratings and a mark on the blacklist of creditors.

It has also become clear that the country has been unable to reduce its government budget deficit to the European Union's demands of 3% of the GNP. The results for 2011 show the GNP at 4.7%, and in order to reach the desired 3% by 2013, Rutte suggested that the coalition cut the budget expenses to 14.2-16bn euros, for the sake of reducing the social spheres; a reduction on pensions and social health security, raising the pensionable age to 66 in 2015. Business was supposed to increase along with the rise in VAT.

However, Wilders anwered that "the demands from Brussels are ridiculous. If we were to follow them then unemployment would only grow, and it is against the interests of my voters. We don't want to see our pensioners sweating blood for the sake of a dictator in Brussels. We will not let our elderly people pay for the Greek swindlers," Wilders said. He thinks that the Dutch people's purchasing power after getting into the Euro zone has been reduced, which is why they ought to return to the guilder. New elections in the Netherlands are expected to take place within the next 80 days, and it might be that this time the government will form the left-wing Worker's Party, which had 30 votes in the current parliament, only one less than the Liberal Party.

The Netherlands has always been a bit of a stick in the mud when it comes to European integration. Indeed, the 2005 referendum which was passed in the Netherlands led to the European Constitutional Crisis, and the previous government failed in their dispute over the war in Afghanistan. This is why the resignation of the present government is a precursor of change in Europe, where opposition of the current dictator in Germany are available.

A day before the events in the Netherlands, Nicholas Sarkozy suffered a defeat in the first round of the presidential elections. It is generally thought that it will be Francois Hollande, a socialist and opposer of the rigid economic policy, who will replace Sarkozy. Shifts in the leadership of these countries promise to destroy the neo-liberal Franco-German-Dutch axis of the Euro zone, which will be capable of its collapse. Analysts have been discussing whether it is worth creating a sovereign currency for every country, in case they have to convert everything back again. In terms of purchasing power, only the Mark is likely to win.

The population in the Euro zone are therefore trying frantically to convert their bank accounts, which are in Euros, into German banks. Last year, according to various statistics, this exchange amounted to 700m. The European Central Bank (ECB) has not been buying any paper currently from the countries of Europe. Will the European Union refuse the rigid economic policy in the new "locomotive" structure? Hardly. The situation may save the Euro from devaluation, but Merkel will not go into it, and she would rather first return to the Mark.