Borat humiliates Kazakhstan with his music

Kazakhstan demands apologies from Kuwait for parodying the national anthem of the republic during the ceremony to award the winners of an international shooting championship in Kuwait. Most likely, if Jordanian website Al Bawada had not reported the news, the confusing situation would have never made headlines. 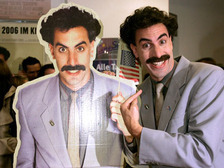 Maria Dmitrienko, a sharpshooter from Kazakhstan, was standing with her hand on her heart and with the gold medal around her neck during the ceremony. To her amazement, instead of the national anthem of Kazakhstan, the woman had to listen to the insulting parody anthem from the infamous movie "Borat: Cultural Learnings of America for Make Benefit Glorious Nation of Kazakhstan."

The movie was made by British comic Sasha Baron Cohen. In the movie, he played Borat Sagdiyev, a Kazakh journalist, who traveled to the USA. The movie was banned in Kazakhstan, because the country was portrayed there as a retarded nation.

However, Kazakh officials acknowledged later that the black PR gave very good advertising to the country. The number of foreign tourists visiting the country increased five times after the success of "Borat."

However, it just so happened that the infamous character insulted the former Soviet state again. As for the words of the parody of the national anthem, it contained such expressions as "the greatest country," the world's best industry" and "the finest prostitutes."

It is worthy of note that the winner of the above-mentioned championship, Maria Dmitrienko, did not leave the pedestal in a token of protest. Moreover, the woman kept on standing there with her hand on her heart - until the anthem was over.

Dmitrienko's coach, Nurlan Amirbekov defended his athlete. "It took her time to realize that there was a different melody playing. It was the first time when she won the competition. She was beaming with happiness. When she realized that it was the national anthem of Kazakhstan, she just didn't know what to do," the coach said.

Could the authorities of Kuwait do it deliberately? That's highly unlikely. The head coach of team Kazakhstan, Anvar Yunusmetov, said that the organizers of the championship simply downloaded the wrong file from the Internet. Furthermore, when the organizers of the championship were awarding an athlete from Siberia, the national anthem that the sound system played was not a Russian anthem.

Kazakhstan decided to file a complaint at the Olympic Council of Asia. The organizers of the competition in Kuwait sent an official letter of apology to the Target Shooting Federation of Kazakhstan.

However, Kazakh officials, including the shooting coach, do not think that a formal apology would be enough. According to Yunusmetov, he is expecting "official apologizes from Kuwait."

Ilsiyar Kanagatov, deputy chairman of the Agency for Sports and Physical Culture, is expecting official apologies from Kuwait's Ministry for Sport, as well as a detailed explanation of the incident.

Does Kazakhstan have to worry that much about such a silly situation? As experience shows, many citizens of Kazakhstan do not know their national anthem themselves. It is worthy of note that they played Ricky Martin's "Livin' La Vida Loca" instead of the national anthem at a recent ski festival in the town of Kostanai.

The director of a local sports school was fired for the mishap. Mr. Kanagatov stated that the authorities of Kazakhstan would officially regulate the actions of Kazakh athletes at international sports events. The text of the national anthem will be sent to all national teams of the country. Olympic athletes will have to learn it by heart.