North Korea shows middle finger and satellite to the world

Most countries were strongly opposed to the pending April launch of the North Korean rocket with satellite on board. U.S. President Barack Obama said that Russia and the U.S. intended to give North Korea a signal to refrain from launching rockets. 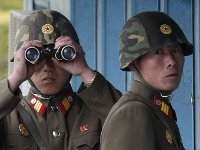 After meeting with his counterpart from Russia Dmitry Medvedev, Obama said that in regards to the situation in North Korea, they both agreed to send a signal that North Korea should refrain from the rocket launch that would be in violation of UN Security Council resolution. He expressed hope that North Korea will refrain from it.

Earlier, speaking in Seoul, President Barack Obama said that North Korea could face further international sanctions if it fails to abandon the launch of the long-range missiles, and that North Korea will not achieve anything with threats and provocations. He also said that the program for the provision of humanitarian assistance to the DPRK can be thwarted, as poor behavior will not be rewarded.

In late February it was reported that the DPRK and the U.S. reached an agreement under which North Korea was to suspend its nuclear testing and uranium enrichment activities, and agreed to resume inspections of its nuclear facilities by IAEA inspectors in exchange for food aid it needed.

A new surge of anti-DPRK statements is linked to the information attack by the Japanese agency "Kyodo," referring to "a diplomatic source," according to which the North Korean military brought components of ballistic long-range missile to the launch pad in northwestern North Korea, where the satellite launch is being prepared.

The most uncompromising position was taken by a number of the nearest neighbors of North Korea. For example, South Korea stated its readiness to destroy the North Korean missile if it deviates from the desired path. This, in particular, was stated by the spokesman of the Ministry of National Defense Yoon Won-shik, "We are studying measures such as tracking and destruction of (parts of) the North Korean missiles in case they deviate from the desired trajectory."

He noted that Seoul cannot but respond to the DPRK's rocket launch that is a reckless and provocative event, threatening the stability on the Korean peninsula. Representatives of Japan spoke in the same spirit.

Earlier, the president of South Korea also urged the DPRK authorities to abandon the rocket launch. The head of UN described the actions of North Korea as "a provocation that will result in the DPRK facing a severe retaliation." The statement came after a meeting in Seoul with the president of the United States.

The hype surrounding the North Korean rocket was caused by the media that on March 16 reported that in mid-April North Korea planned to launch satellites and rockets based on the North Korean technology. The DPRK is going to dedicate the satellite launch of "Kvanmenson-3" to the 100th anniversary of the birth of the founder of the state, Kim Il Sung, the grandfather of the current leader of the country. The UN chief has repeatedly urged North Korea to reconsider its decision and to refrain from launching long-range missiles. The UN urged the DPRK to comply fully with the relevant UN Security Council resolutions, including resolution 1874 (of 2009), which prohibits North Korea from missile development and testing while maintaining its nuclear program. The resolution 1874 was adopted after the previous launch of a multistage rocket "Ynha-2" in 2009 that resulted with the fall of the North Korean satellite into the sea.

But despite the enormous pressure faced by the DPRK (its desire to launch a rocket was condemned by Russia, the USA, Japan, France and many other countries), it does not intend to abandon the launch.

North Korea insists on the peaceful nature of its space program, but experts of the international community fear that it can be used for military purposes because such rockets may become intercontinental missiles stuffed with nuclear warheads. At the time when North Korea has survived largely thanks to foreign aid, few see any other use in the flight into space.

One reason for the inflexible behavior of North Korea lies in the behavior of China that does not condemn it, believing that a launch of an ordinary satellite cannot damage the rest of the world.