Let us see what is behind the Syrian terrorists

The West calls on the Syrian Armed Forces to stop killing terrorists, while it continues to arm them as it did in Libya, the United Nations Organization calls on the world to act with one voice on Syria. Has anyone investigated who the Syrian terrorists are and what they are doing? Has anyone heard of Suriye Ulusal Geçiş Konseyi? Sounds Turkish... 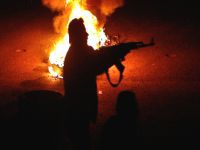 For a start how can the world act with one single voice after what the FUKUS Axis (France, UK US and Israel) did in Libya and after the mission creep their no-fly zone warped into? Does anyone remember the promise of no boots on the ground? Right, and what about the special forces involved in a full-scale invasion? And has anyone had a look at Libya recently and seen the utter chaos NATO's terrorists have visited upon this once-peaceful country? The only zones worth living in are those controlled by Libyan patriots, meaning Green forces loyal to the Jamahiriya Government.

So let nobody give the FUKUS Axis and their NATO friends any moral right to opine over Syria, simply because, who is arming the Syrian terrorists anyway? And secondly let us not use bullshit in our news pieces speaking about the Government fighting "unarmed civilians". Does an "unarmed civilian" destroy a military jet in full view of SKY News, which claimed it was a "victory"? So if I were to destroy a British military aircraft, would that be a "victory"?

No, these are not unarmed civilians - they are terrorists and they have been armed and financed by the west, yet again. One faction is the al-Nusra Front to Protect the Levant, a group which has links to Al-Qaeda and this is the group which claimed responsibility, gloating in a 45-minute video, for the terrorist attacks in Aleppo and Damascus, using car bombs. The terrorists gloated about raping a woman and murdering her son. It also claimed responsibility for the terrorist attack in Damascus in January. The General Secretary of this terrorist group is called Al-Faith Abu Mohammed al-Golani. Al-Qaeda flags were visible in the background during this sickening act. What is the FUKUS Axis saying about that?

On Sunday a terrorist group murdered 13 civilians including women and children in Hasiba, near Qusayar, Homs. What is the FUKUS Axis saying about that?

Human Rights Watch has connected the Syrian "Opposition" terrorists with "kidnapping, detention, and torture of security force members, government supporters, and people identified as members of pro-government militias, called shabeeha. Human Rights Watch has also received reports of executions by armed opposition groups of security force members and civilians". This is exactly what NATO's terrorists did in Libya. What is the FUKUS Axis saying about that?

I thought so... Suppose the west stopped arming the Syrian traitors who are murdering Syrian civilians? Maybe we should investigate further who is sending these weapons and which countries are allowing them to come in.