The official Tbilisi has not yet commented on another leak on WikiLeaks, but some Georgian experts and journalists have taken the information about the handover by Israel to Russia of the secret codes for the earlier supplied Georgian army drones (UAV) seriously. 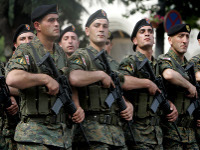 According to the source of WikiLeaks, four years ago a deal between Moscow and Tel Aviv took place. In exchange for the codes of Iranian Tor-M1 missiles, the Israelis reportedly handed over to the Russian military the codes for the Georgian UAV. In 2005-2007, Georgia bought Israeli drones, multiple rocket launchers and other military vehicles and equipment that were then used in South Ossetia.

The relationship between Tel Aviv and Tbilisi began to flourish after the collapse of the Soviet Union. Establishment of the contacts between the two countries began under Eduard Shevardnadze. The development of the economic relations with the republics of the Caucasus was part of the Israeli strategy. Israel was getting into the new markets, and the interest in new contracts for the sale of weapons at the time was very high.

Since coming of Mikhail Saakashvili to power, a sharp turn towards the militarization of Georgia began. With the deterioration of the Russian-Georgian relations, the country's defense establishment has shown a number of initiatives for the acquisition of weapons and ammunition in the U.S., Western Europe and Israel. David Kezerashvili, a Jew, was appointed the Minister of Defense of Georgia, which also contributed to the establishment of business contacts with the Israelis. On the eve of the August war there were talks about the possible purchase of tanks "Merkava MK-4" that are equal to the Russian T-80 in terms of the parameters.

With the outbreak of hostilities in South Ossetia, the supply was suspended, and further contacts in the defense sector were frozen. During this period, Russia has expressed its concern over Israel's sale of UAV, rifles and artillery systems to the Georgians. Moscow was heard in Tel Aviv.

However, the Georgians had certain problems with the payment for the previous military supplies, which led to the increased tensions between the countries. In October of 2010 in Batumi Israeli businessmen Zeev Frenkel and Ronnie Fuchs were arrested on suspicion of bribery. Official Tel Aviv took this case as fabricated. They believed its goal was to refuse to pay the debt according to the Georgian military contracts.

It is noteworthy that the current publication of WikiLeaks site coincided with the visit of Georgian Foreign Minister Grigol Vashadze to Israel. The letter, made public on the website after hacking the e-mail of Stratfor think tank, represents a private report to the employee Reva Bhally about a meeting with a Mexican policeman who gave her the confidential information.

The world media quickly reprinted the compromising materials, although there are increasingly more doubts about the veracity of the information from the Bhally report. According to the document, the data source was a former Mexican police officer, called a "friend-informant." He gave the facts of the "deal" to an analyst at Stratfor, an attractive young woman, when they were imbibing together. As noted by the publication IzRus, in the course of the conversation the speech of her counterpart became increasingly murky.

Based on the information obtained, Bhalla created a hypothesis concluding that after the 2008 war, Israel has handed Russia the access codes to their drones. However, she does not explain how the Russians could use these codes before receiving them. As noted by IzRus, the text is full of such absurdities and assumptions whose source is the ex-cop "in the know".

However, Georgia reacted to another leak with all seriousness. Military analyst Irakli Aladashvili told the press that he did not rule out the possibility of handing off the secret codes for the Russian UAV. It was then when three drones were lost over the sky in Abkhazia. A few days ago Saakashvili announced a test of the Georgian drones.

Current relations between Tel Aviv and Tbilisi are rather strained than warm. Despite the half-hearted attempts to restore the trust, the prospects for the economic and strategic partnership between the two countries are still vague. Georgia's hopes for the resumption of the arms shipments were not met: last year the authorities denied the rumors of an impending deal for the sale of tanks "Merkava MK-4."

However, Israel, in spite of the scandal with the arrest of Frenkel and Fuchs, is in no hurry to completely break off relations with Georgia. According to Israeli media, at an official meeting President Shimon Peres and Foreign Minister Vashadze of Georgia discussed the issues of regional security in the Caucasus. After the meeting, speculation about the next possible resumption of military supplies appeared in the press.

However, Israel is still not interested in complications in relations with Russia that seeks to avoid excessive strengthening of Saakashvilli's regime. At the moment Georgia does not have to rely on major military-technical assistance from the Israeli side.