NATO fighter jets can patrol anything they want

Five airplanes of Russia's Air Force caused quite a commotion in the Land of the Rising Sun. The planes were flying near Japan's airspace, although they did not violate any international laws. In the meantime, NATO jets will be patrolling the airspace of the Baltic States on a permanent basis, flying along Russia's border. Russia did not set forth any claims about it. 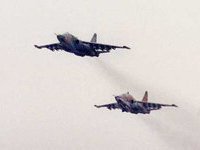 Japan is not a NATO member. However, it is an open secret that Japan is a close ally of the United States in the Far East. Japan's Air Force was alarmed in the morning of February 8. Two Russian Tu-95 strategic bombers appeared in the airspace above the Pacific Ocean and the Sea of Japan. The planes were flying not very far from Hokkaido and Honshu islands. The bombers were accompanied with two Su-24 jets and A-50 AWACS aircraft. None of those aircraft flew into Japan's airspace. However, Japanese defense officials stated that it was an unexampled event.

Vladimir Drik, an official spokesman for the Russian Air Force, said that the flights in question were conducted in the neutral area. The crews of the Tu-95 bombers were training their skills to fly in the area without any visual references. The Tu-95 bombers were also refueling in the air from two Il-78 planes. Afterwards, the bombers were accompanied by Su-24 fighter jets, whereas the A-50 aircraft was monitoring airspace.

In September 2011, Russian Tu-95 bombers flew around Japan without breaking into its airspace. Several Japanese fighter jets took off to control the situation. South Korean fighter jets were also observing the maneuvers of the Russian aircraft. Afterwards, Japanese officials asked not to repeat such flights in the future ever again. However, there is no international law that would restrict Russia's rights for such flights. Therefore, Russia had the right not to listen to Japan.

The countries did not have the possibilities to conduct such sorties, so they were glad to accept the offer from the West. The jets were deployed in Lithuania. NATO members pull the duty in turn. Each shift lasts for four months. Nowadays, it is Germany's turn. It was originally believed that the patrol flights would end in 2007. However, the Baltic leaders asked to extend the mission. As a result, the mission will exist before 2018.

As a matter of fact, the fighter jets of NATO's leading countries will be flying along the borders between Estonia, Latvia, Lithuania and Russia for good. It is worthy of note that the situation in the north - near the border with Norway - and in the area of the Black Sea - from Turkey's side - is the same. It just so happens that NATO's aircraft can patrol Russian borders whenever they want. If Russia does the same, then everyone else thinks that it's inadmissible.

Anatoly Tsyganok, a military expert, told Pravda.Ru that Russia had been retrieving the flight experience of its long-distance aviation during the recent years.

"The Japanese do not have any reason to be alarmed. The Americans fly across the North Pole, they fly near the territorial waters of the Russian Federation all the time, but no one says anything against that. Japan is a US ally - there are American army bases in Japan. There are aircraft carriers in the Pacific Ocean too. The appearance of the Russian fighter jets is an unpleasant event, of course. The Russian aviation can thus have an opportunity to watch the aircraft carriers.

As for the Baltic States, one should go 20 years back in history to understand the reasons of the above-mentioned agreement with NATO. During the negotiations about the unification of Germany, US, British, French and German officials gave the Soviet Union guarantees that NATO airplanes would not be patrolling the airspace to the east from Germany's eastern borders. NATO was not supposed to expand eastward either. All NATO top officials claim that there were no such guarantees made, but they are lying. The guarantees were documented.

As soon as the Baltic States joined NATO, they were not allowed to have their own planes to patrol their own airspace. As a result, the sky above Latvia, Lithuania and Estonia are controlled by the fighter jets of Germany, France, Denmark, etc. At the same time, NATO recreated the entire defense infrastructure of Poland and the Baltic States. It is worthy of note that they use a former Soviet airdrome for such sorties.

After the war in South Ossetia, Baltic officials said that they would need better protection from Russia. NATO eventually decided to strengthen the defense of Latvia, Lithuania and Estonia.

So there we have it. NATO can always do the things, which Russia is supposedly not allowed to do.