Obama, the Hero, determined to destroy Syria and conquer Russia 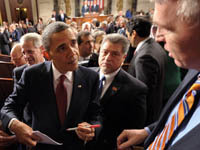 U.S. President Barack Obama on January 24 made his third State of the Union Address in Congress. In his speech he touched upon the issues of economic recovery and key issues of foreign policy.

Obama tried to assure that there was no point in speaking about the loss of the U.S. leadership in the international arena, because his country maintains a leading position in the world. According to the American president, the revival of the American leadership is felt throughout the world.

Broadcast footage of his speech resembled a scene from zombie film where at every mentioning of "the greatness of America" those gathered in the audience would instinctively stand up and vehemently welcome these statements.

However, Obama elaborated on his comments, pointing out that American old alliances in Europe and Asia have never been stronger and that the US has made it clear that America is a Pacific power. However, this "leadership" does not have the desired effect on China as it is also a Pacific power that shows growing leadership ambitions in the Pacific Ocean.

In addition, the U.S. president said that the U.S. has become more secure and respected country in the world. According to Obama, it happened thanks to the "the current generation of heroes." Apparently, Obama considers himself to be one of them. For example, he pointed out as one of the major achievements the fact that for the first time in nine years, Americans are not fighting in Iraq and for the first time in two decades, Osama bin Laden does not represent a threat to the United States.

Obama also said that the United States had a long-awaited breakthrough in the Afghan war, and that 23,000 U.S. military will be withdrawn from Afghanistan by the end of the summer of 2012 following the 10 thousand that have already returned home. Obama said that the transfer of power to Afghan forces will continue, and a partnership will be built with this country that will never be the base of attacks on America. He added that most of the leaders of "Al Qaeda" were crushed, and the initiative of "Taliban" was broken, and some of the troops began to leave Afghanistan. He said these achievements were a proof of courage, dedication and teamwork of the Armed Forces of America.

Meanwhile, the Taliban that significantly expanded their control zone over the past two years and that is increasingly penetrating the quiet areas of Afghanistan are unaware of Obama's success.

Obama pointed out that there were a number of unsolved issues. As always, the American super-hero is impeded by villains from whom America must save the world. Now this is Syrian President Assad, crushing Salafi "democracy" in his country, and Iran's nuclear program.

Obama is ready to celebrate his victory over the latter: He said that the forces of the diplomatic world that had previously been divided and argued about the ways to deal with Iran's nuclear program, have now united. Now Iran is even more isolated regime, and Iran's leaders face tough sanctions, and this pressure will not weaken. America is full of determination to prevent Iran from obtaining and developing nuclear weapons.

Obama has also dispelled the fears of those who were "not in" and feared that he would sacrifice allied relations with Israel in the name of short-term U.S. interests. According to him, the U.S. will do everything to protect its main Middle East ally - Israel. Obama stressed the inviolability of the U.S. commitment to Israel's security. Moreover, assured U.S. President, Washington and Tel Aviv now have the closest military cooperation in history.

President Obama has already written off the Syrian President. He said he had no doubt that the Assad regime "will soon discover that the forces of change cannot be reversed" and said that the United States would stand against violence and intimidation in the Middle East and beyond.

However, these great developments outlined by Obama are overshadowed by the failures in the economy. Of course, foreign enemies were mentioned as well. In particular, Obama has expressed dissatisfaction with the widespread penetration of "cheap Chinese goods" and promised to protect American manufacturers.

He talked about the struggle for foreign markets. Particular reference was made to Russia. Obama called on Congress to take action to protect American interests. He stated that the Congress must do everything so that no country has the advantage over American manufacturers when it comes to access to the financial or new markets, like Russia. He said that American workers were the most effective in the world and promised that America would always win.

Trade relations between Russia and the United States are limited by the Jackson-Vanik amendment, introduced by Washington in 1974 against the Soviet Union for the lack of freedom of emigration, primarily for Jews.

Speaking of Obama's address, it should be remembered that it was made on the eve of the presidential election, and that the words about the greatness of the United States are intended to restore the confidence of voters.