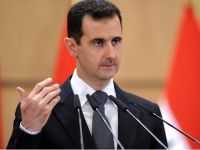 What happens in the international community is not by chance, what is happening in Syria and Iran is not by chance. And what is happening in Syria and Iran? Who is behind the acts of terrorism? What is behind the assassinations and murder of high-ranking officials in both countries? We are building up to what, exactly? And where is the truth in the international press?

As usual, the international "bought" press has managed to come up with the same goods time and time again and so long as a gullible public, obediently swayed to where it is supposed to be by swallowing the tidy controlled media package daily, it is going to work: public opinion will acquiesce to the schemes of the arms and energy and banking lobbies which control Washington, and by proxy, NATO and the USA's allies.

For people to know what is really going on, let us take a look at what happens when you go shopping. OK, we all know by now that your costermonger, your greengrocer, your fishmonger, your butcher, your hardware store, your haberdashery and your baker belong in the deepest recesses of the reader's grandparents' memories and that these days if you want to buy something, you drive to a "Big Space", park your car, walk inside, put a coin in the trolley and push it around the store.

What you do not know is that you are controlled from the second you walk in, to the moment you leave. Not only are the goods placed strategically to make you more likely to buy them, the target products for your average two-year-old are higher up than those of the average five-year-old because the two-year-old will be seated on mummy's trolley and the five-year-old will be trailing behind looking at things at his/her eye level. The Big Space then relies on what it calls Pester Power for the buy.

The smells are controlled (coffee to make you feel like buying, bread to make you feel relaxed and at home), the music is controlled to make you move faster or slower and the impulse buys are placed at the check-out where you will spend your three to ten minutes waiting and you or your kids will eventually succumb.

What you also do not know is that the squeaky-clean media package placed before you daily in your nice crisp newspaper or your TV News programme is the result of a similar process of sinister manipulation. How many people were informed of Colonel Gaddafi's positive humanitarian record - for which he was to receive an award from the UNO? How many people knew he was spending his time trying to reduce casualties among the terrorists attacking his country to the minimum, negotiating with them before an attack took place?

Who informed the readers that NATO broke the rules, broke international law, supported terrorists on their own proscribed lists and committed acts of murder and war crimes?

Now let us move on to Syria and Iran. Where are the stories about the mass acts of murder inside both countries, taking out Generals, strategists and high-ranking politicians and scientists? Who is perpetrating these evil deeds, who are these terrorists? Why are these acts being committed?

And this same evil clique is now swinging into action in the Middle East. First objective: Lebanon and Syria; second objective: The Islamic republic of Iran; third objective: the resources of Central Asia, leading to direct confrontation with Russia and the People's Republic of China, which passes by installing Washington-friendly regimes in all these countries so that guess who can siphon off the resources?

It is not difficult to stir up trouble, take advantage of internal divisions, divide and rule and reap the consequences from the chaos that is sown. That is exactly what the west has been doing for hundreds of years and continues to do today. It has to do not with freedom and democracy - why did NATO not allow the Libyan Jamahiriya government to hold an election? It has to do with control of resources and guaranteeing that the USD is used as the international currency in major deals, and that includes oil.

Why is it that when a country threatens to swap the USD for another currency in its dealings, it is invaded? As for what we can do, the bottom line is keep informed and hold the politicians responsible for their actions. Democracy does have a fatal fault for those who try to manipulate it, and that is the fact that the power lies ultimately in the hands of the voters.

Bring international policy onto the political agenda and don't let them lie to you and fool you about what is really going on. If you really feel your vote makes a difference, then create the conditions for this to be the case. Let us use citizen power to avoid world war three. After all those who push for it, will their sons be on the front line?