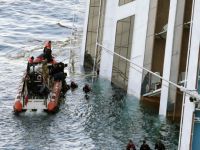 According to the Italian press, a Facebook message alerted that the ship was getting close to the island where one of the crew members was born...

The Italian newspaper Corriere della Sera and Il Tirreno said on Monday that the captain of the ship, Costa Concordia, which sank after colliding with rocks on the coast of Italy on Friday, made a risky maneuver to approach the island of Giglio, in order to pay tribute to their colleagues.

The captain of the Costa Concordia, Francesco Schettino, was arrested by Italian police in Grosseto on 14/01.

Rescue crews continued their search for survivors on Monday, although work was suspended for three hours because of bad weather that caused the vessel to move. Authorities said the search will be interrupted overnight.

In the evening, Italian Coast Guard officials raised the number of missing from the Costa Concordia ship to 29. Marco Brusco, Coast Guard chief, said 25 passengers and four crew members have been missing for three days, after the ship struck rocks off the coast of Tuscany and fell over on its side.

Earlier, the number of missing was 16. Brusco did not explain why the increase, but indicated that 10 Germans are among the 29 missing.

The unauthorized and risky maneuver made by the ship captain was, according to Italian media, a tribute to Mario Palombo, a legend among the commanders of Costa Cruises, and a tribute to the only native of the Isle of Giglio on board, Antonello Tievoli. the head waiter.

On Friday, according to the publication, Captain Schettino and his assistants called Tievoli to one of the bridges. "Antonello, come and see. We are right on top of Giglio," they would have told him. Tievoli then, would have warned his colleagues that the ship was "very close to the coast," but it was already too late.

On Monday, the chief executive of Costa Cruises, Luigi Foschi, said that the captain of the ship made an "unapproved and unauthorized" course deviation. "The company will support the captain and give all necessary assistance, but we must recognize the facts and we cannot deny that there was human error," he said. 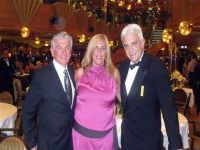 According to him, Costa's ships have scheduled routes and alarms that sound when they go off course." The route had been programmed correctly. The fact that the vessel had left the course is due solely to a maneuver unapproved and unauthorized made by the commander," he affirmed.

Foschi said the ship is inspected regularly and the last check was in November. Emotional and fighting back tears, the president apologized for the accident.

Schettino is suspected of manslaughter (when there is no intent to kill) and denies all accusations. He is being questioned by the police and claims that the navigation system showed no obstacles at the scene of the accident.

Schettino has denied accusations that he left the vessel without rendering aid to passengers and said he only left the ship after completing the evacuation process of the passengers. In an interview broadcast on Italian television, he was asked if he followed the maxim that "the captain is the last to leave the ship."

"We were the last to leave the ship," he answered.

The captain also said that, according to the information he had at the time of the accident, the rocks that caused the rupture of the hull were not detected by the system for automatic navigation of the vessel.

According to him, the nautical charts would not have indicated the presence of rocks at the site. "We should not have had this impact," he said. "From the information we had, we were more or less 300 meters from the rocks."

Close friends of Tievoli, the head waiter, heard by the Italian newspaper, say he feels guilty for the sinking of the ship, which left six people dead so far. He was questioned by Coast Guard authorities on behalf of the prosecutor in charge of the investigation.

The newspaper, Il Tirreno, also said that at 21h08, a message posted on Facebook by Patrizia Tievoli, 52, sister of Antonello, may be evidence that the tribute was really the reason for the ship to pass so close to the coast of Giglio.