The West rescues Tymoshenko at all costs 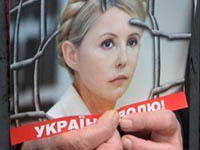 The scandal around the case of former Prime Minister of Ukraine Yulia Tymoshenko is heating up. U.S. Secretary of State Hillary Clinton wrote her a letter. Czech Republic has granted asylum to her husband, Alexander Tymoshenko. The latter intends to turn the party of his wife "Fatherland" into an international organization.

In the very beginning of this year the European human rights activists have made it clear that they will closely monitor the health of Tymoshenko placed in the Kharkiv region. "Despite the fact that the relevant structures keep talking about satisfactory conditions of Tymoshenko's detention, her health is deteriorating. The world in general and the EU in particular must give their own assessment of the situation of the former head of the Ukrainian government," said the coordinator of international projects in Europe (HEF) Oyvind Mell.

The position of the European human rights activists is understandable. In the end, checking the conditions of the prisoners is their direct responsibility. However, the letter to Tymoshenko signed by the U.S. Secretary of State is something new. Perhaps, her correspondence with Yulia Tymoshenko (if the latter chooses to answer) will once be published as a book.

"We will continue to advocate for judicial due process and the release of you and the other imprisoned former senior government officials as a critical step in that process. Also, please be assured we are committed to free elections with the participation of all legitimate political candidates and parties in Ukraine. This is another critical step toward European Union integration and something your country has done successfully in the past. I hope this will again be the case in the October parliamentary elections," Hillary Clinton wrote in a letter to Yulia Tymoshenko.

"The United States was disappointed the Kiev Court of Appeals upheld your conviction without addressing issues raised during the trial about selective prosecution and the administration of justice. Indeed, our concerns were then heightened by the sudden decision to transfer you to a prison far from Kyiv, especially given reports about your medical condition," Clinton stressed.

Yet, the major international news on the case of Tymoshenko came from the Czech Republic. On January 6 it was reported that the Czech Interior Ministry decided to grant her husband Alexander Tymoshenko political asylum. Thus the petition by Tymoshenko filed in October was granted to him. His relatives explained this step but undue pressure on his family in Ukraine that could no longer be tolerated.

In the evening of January 11 came an explanation for asylum. "The Czech Republic does not provide a "political asylum ", but according to its international obligations, it provides international protection to refugees, among other things - in the form of asylum. Those who apply for asylum may have different causes, not necessarily only of a political nature, these individuals are not always politically active, "explained the Czech embassy in Kiev.

There is also a theory that Tymoshenko decided to stay in the Czech Republic not without a reason. On January 9 Ukrainian TV channel "1 +1" aired a story about Tymoshenko's husband purchasing elite Czech real estate 12 years ago. In one of the apartments in the city of Usti nad Labem he registered a firm International Industrial Projects. The firm seems to a have a Czech co-owner, and is engaged in trade operations. Yet, the office door was tightly closed, and Tymoshenko denies the very existence of the firm and real estate in the Czech Republic.

Meanwhile, Tymoshenko's lawyer Serhiy Vlasenko said that political asylum in another country can be granted to her daughter, Eugenia, who recently recovered her maiden name. "If the pressure increases, if the government pursues her (daughter Eugenia), then we will make such decisions", said the lawyer. Eugenia Timoshenko denied this information.

Alexander Tymoshenko expressed a desire to become a politician of international scale. "Together with our colleagues we are setting up an international public association "Fatherland." The main objective of its work, in particular, is to analyze the actions of today's government and its criminal activities in stealing from Ukraine, and highlight Yanukovych's operations in foreign publications. I urge the world to understand that the regime of Yanukovych did not need Yulia Tymoshenko alive," he said.

Tymoshenko does not suffer from the lack of media attention. Articles about her emerge in the West nearly every day. However, even famous for his anti-Russian and "orange" spirit Czech newspaper Lidove noviny doubted that it was necessary to grant Alexander a refugee status. "Yulia Tymoshenko was convicted in a politicized process. That is indisputable. But is her husband Alexander among those who are in danger at home? No one knows exact answer," the newspaper notes.

In turn, Italian La Repubblica did not spare words describing the situation around Tymoshenko. The newspaper wrote that a murder of Tymoshenko is planned and that she was unconscious in her cell for over two hours the night of January 6. They continued to say that Europe pays no attention to this drama and with return of Yanukovych to office the views different from those of the government are getting banned with support of Moscow and silence of Europe.

It looks like Tymoshenko's case will remain the center of attention of the West for a long time. This is understandable as both Europeans and Americans believe Tymoshenko to be one of their own. Unlike with Yanukovych, she does not have even a moderately pro-Russian party, and "Fatherland" has open nationalists in it. She was the "engine" of the orange revolution.    Of course, Tymoshenko has an "understudy" - a pro-Western leader of the "Front of Changes" Arseniy Yatseniuk. However, in terms of charisma he loses to Tymoshenko. In addition, his sister is a longtime resident of the United States, and in some circles it is rumored that Yatseniuk is a Jew (though there is no evidence to it). Finally, Yatseniuk was born in Western Ukraine - Chernivtsi, and this may scare away voters from the East and South. Russian-speaking Tymoshenko was born in Dnepropetrovsk.

Viktor Yushchenko is a known player. Ultranationalist Oleg Tyagnibok has no chances of coming to power. Yet, Yulia is in a different situation. EU and U.S. need a guarantee that Ukraine does not turn to Russia. Yanukovych cannot provide such guarantees. That makes them cling to Tymoshenko and try to pull her out from prison at any cost. The West has little interest in finding out whether she is guilty or not. Even if she is guilty, she can be forgiven as one of their own.