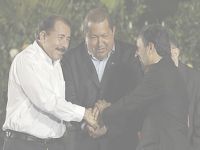 At Daniel Ortega's inauguration ceremony on Tuesday, January 10, 2012, more than 8,000 people were present in Managua, among them Venezuelan President Hugo Chavez and Iranian president Mahmud Ahmadinejad.

The Sandinistas in front of the "Casa de los Pueblos" cheered and applauded Ortega who has been re-elected with a landslide result of 62.64% of all votes and will proudly serve his third term as president of Nicaragua. His first period in office was from 1985 to 1990, his second term from 2006 to 2011.

In his inauguration speech, Daniel Ortega promised to carry on with his administration's social programs to reduce poverty and reach more equality for all the citizens of his country.  Furthermore, he pointed out that keeping peace was essential to consolidate all human achievements.

"Today more than ever before the world needs peace, dignity, work, justice, socialism, solidarity and unity of the great family living on our planet Earth," President Ortega said.

"To reach peace there is only one way, a war with atomic weapons will not permit the human species to survive," he warned, and lashed out at predator capitalism having brought crisis and disaster to a greater part of the world.

"There is no space on this planet for capitalism. We need cooperation and solidarity instead, with just and fair interaction among our nations. ... The peoples of the world must combat poverty and install social programs," he affirmed.

Referring to his plans for Nicaragua he said, "We need more programs of infrastructure, highways and energy. We also need to integrate the region of Central America and open the doors wide to the Latin American Community of ALBA (Allianza Bolivariana de los Pueblos de Nuestra America). This is a huge task we have with ALBA, we must win the battle."

ALBA, the Bolivarian Alliance for the Peoples of Our America, is based on the idea of social, political and economic integration between the countries of Latin America and the Caribbean, associated with socialist governments and based on a vision of social welfare.

Its member nations are Antigua and Barbuda, Bolivia, Cuba, Dominica, Ecuador, Nicaragua, Saint Vincent and the Grenadines, and Venezuela. ALBA nations are in the process of introducing a new regional currency, the SUCRE. They have founded their own regional bank, BANCO DEL SUR, Bank of the South.

During the meeting in Managua the presidents of Nicaragua and Venezuela, it was agreed to continue strengthening their economic cooperation. "2012 will be a very important year for both of us," Hugo Chavez said. "We will work hard to consolidate what we have already achieved in our common economic space. ALBA is the mechanism to unite our nations. We need to fortify ALBA."

The President of Venezuela was greeted and cheered by a crowd of young people from the Sandinista Youth Organization (Juventud del Frente Sandinista). "President Chavez, you are a symbol of Our America," they shouted. "Viva Venezuela! Viva Chavez!"

Talking to them, Chavez affirmed that the actual process Latin and Central American countries are going through is not only a dream, but the beginning of a new era, based on justice and peace.  What is striking for the observer regarding Daniel Ortega and Hugo Chavez from a distance is their similarity in many regards.

Both were dissatisfied with their countries' dictatorial regimes and got involved in underground activities from their early youth. Daniel Ortega, following in his parents' footsteps, joined the Sandinistas opposing dictator Anastasio Somoza's regime. Travelling to Cuba, he met Fidel Castro, with whom he has kept in close touch ever since.

Similarly, Hugo Chávez was dissatisfied with the IV. Republic in Venezuela and its puntofijismo politics which he viewed as corrupt and undemocratic. He described his childhood as poor, having experienced "humility, poverty, pain, sometimes not having anything to eat," and "the injustices of this world". Chavez also entertains a close friendship with former Cuban president Fidel Castro who is like a father for him.

Based on similar experiences in their childhood and adolescent years, both presidents subsequently introduced programs for marginalized groups, government and land reforms, whilst nationalizing various key industries.

Both Daniel Ortega and Hugo Chavez are also vocal critics of imperialism, neoliberalism and capitalism generally. "Socialism builds, while capitalism destroys," is one of Chavez's favorite sayings.

Both presidents support the Socialist Arab Republics of Libya and Syria. When the Great Jamahiriya was attacked by NATO and invaded by western paid mercenaries who are currently posing as the governing "Council" in Libya, Chavez and Ortega repeatedly called for mediation and offered help. Unfortunately, their calls went unheard.

Now that Syria is threatened by the same process of foreign instigated upheaval and chaos, again Chavez and Ortega are among those world leaders who speak out clearly in defense of President Bashar al-Assad, the Socialist Baath Party and the Socialist Arab Republic of Syria.

Furthermore, both have strong ties to Iran. Daniel Ortega told the press that the "revolutions of Iran and Nicaragua are almost twin revolutions ... since both revolutions are about justice, liberty, self-determination and the struggle against imperialism."

Thus the observer watching from a distance might be able to see a new axis of powers forming, an axis that stretches from the Middle East to the Caribbean and Latin America, with strong ties to the Russian Federation and the People's Republic of China.

A new axis for the new century.