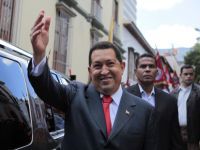 CELAC, the newly created community of 33 Latin American and Caribbean countries, shows that Latin America is nobody's backyard any more, but a proudly advancing continent, striving for unity. The recent CELAC summit in December 2011 was held in Caracas, Venezuela, a truly symbolic place.

Venezuela has become the locomotive of change, development and progress during the 12 years of Hugo Chavez's presidency from 1999 to 2011, the current Fifth Republic.

The socialist Bolivarian Republic of Venezuela has acquired fame as the country of Great Missions, with a host of agricultural, cultural, ecologic, economic, social and health programs to benefit the people who were excluded or forgotten in the former Fourth Republic.

The housing program has proudly achieved 96% of its 2011 construction goal, with 144,061 new homes built. At the same time it has developed into a grassroots movement since communities are involved.

President Hugo Chavez stresses the importance of the people's involvement, "Nobody knows how to build houses better than the people. If we want to put an end to poverty, then we must give power to the poor. This is the main principle of our Socialist Bolivarian Revolution."

The latest social program is the Mission for the Elderly, launched in December 2011. Women over 55 and men over 60 are eligible to register in order to receive pension payments from the state.

Formerly those senior citizens who worked outside of official public and private sectors were excluded. Hugo Chavez asks, "How many older people worked their whole lives in family homes, washing and ironing? But after turning 60, they don't have a pension? We are going to give them their full pension."

In the Fourth Republic only 367,000 elderly people received a pension. In the Fifth Republic of President Chavez there are 1,900,000 senior citizens enjoying a pension equivalent to the minimum wage.

The Chavez administration decreased extreme poverty from 29,8% in 2003 to 6,8% in 2011. The government has set itself the task to continue reducing this figure.